Where the Bees Go to Die... 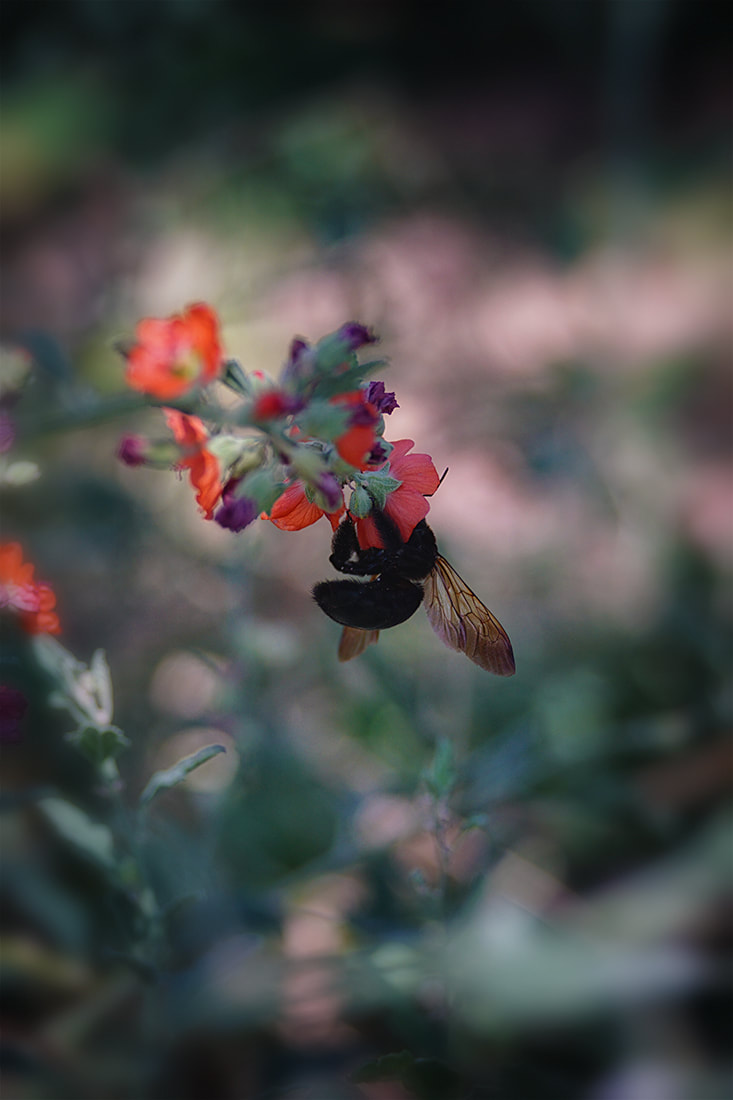 The maximillian sunflowers are starting to bloom, the flowers at the late edge of summer, just in time for the hungry bumblebees. Most of the other flowers have gone to seed by now, with the main exceptions being the Sedum telephium and giant golden squash blossoms on the red kuri vines. This was my first excursion into winter squash. I celebrated the first tiny fruits when they started to appear earlier in the summer, but to my dismay they began withering and falling off. I read about how some squash fruits, if incompletely pollinated, will start to grow, but later be aborted by the plant. Some are still ripening on the vine. I’m not sure if there is enough time before the frost, if it comes early. The vines grew in great lengths, which I trained somewhat out of the path, into circles around the dormant tulip beds. They crawled about the mulberry trees and into the hollyhocks and cedar. Next year will bring the creation a dome or some other support structure for the sprawling plants to scramble up and about. Hanging squash looks pretty and the little hammocks for supporting large fruit are both cute and practical.

The bumblebees are still busy in the yard, though some of the larger ones are very slow now. They crawl into the squash blossoms and roll around the pistil, sucking nectar, and sometimes they just lay there. Other bees come and scramble over them, stepping on their bodies as they lay there resting. Thinking about it, it seems like it might be a nice place to die if you are a bee, with abundant sticky nectar and a shade from the sun.
The yellow blooms look like skirts flaring out like when twirling around, although upside down. New inspiration for garden garb: the squash blossom skirt.
October 25th

This year brought an unusually wet summer. We got over 6 inches of rain from the monsoons, with a very wet start, a dry middle, and then an extra boost towards the end. Some of the garden loved it, but other plant inhabitants did not fare so well with the unpredictable moisture levels. For example, some of the tomatoes, the Bosque Blue and Atomic Grape, readily developed blossom end rot from the extra water. (They were in a more shaded patch – the varieties in a more sunny spot seemed to do just fine.) Our gala apple tree, reliably productive every year, had a small crop and most of the fruit rotted on the tree, a combination of coddling moth tunnels and fungal infection. The fungus exacerbated by the extra moisture, and the moth larvae tunnels into the fruit allowing easy access to the inside.

It was not all bad, though. Some things did well in the garden this year, including a nice green gage plum harvest, and a newly refreshed interest in edible flowers. Some truly spectacular harvest-and-forage salads were made, and they were extra colorful from the hollyhock, rose of Sharon, and other edible petals. We did have a wonderfully abundant blackberry harvest – they did not complain about the extra rain! At the end of the harvest window, we left some of the berries on too long and they got tough and sun-baked. I thought the birds would delight in them, but perhaps they are saving them for the colder winter months. The dried berries are still on the old canes. Rosemary, mint, and tulsi were productive, and we had a few figs from our tiny tree. The agastache plants that we started from seed early this spring grew large and flowered enough to have a small harvest of flowers and leaves for spicy licorice-flavored tea, and the frost from this morning is a good indicator that the rose hips and persimmons are ready to harvest, too. We are going to try drying some of the persimmon harvest this year. The pictures I’ve seen of dehydrated persimmon slices look beautiful and will allow us to enjoy the flavor much longer than the fresh fruit will keep. They will make nice holiday gifts, too. The kuri squash ended up with two fully ripe fruits before the cold came, but there are still six small, not quite ripe squash that we will be eating soon, as they will not keep for very long with their tender skins. 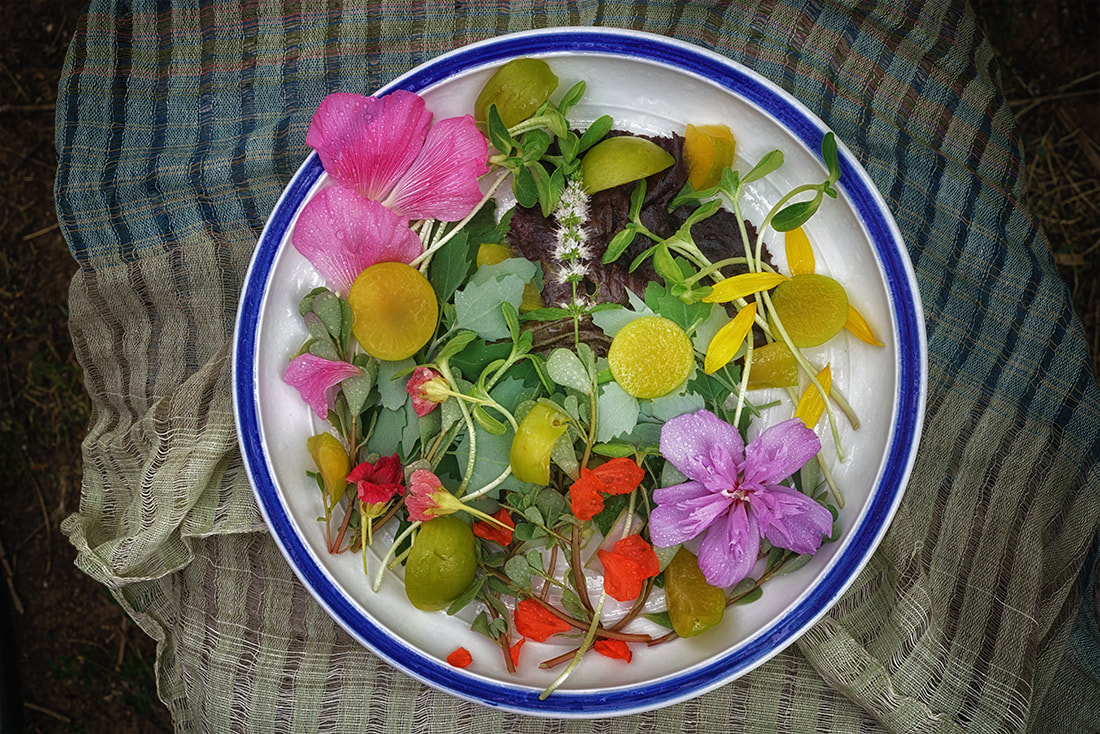 Fruit, Flower, and Forage Salad - Green Gage plum on a bed of baby red lettuce, purselane, and lambs quarters, with edible petal garnish. The Hollyhock and Rose of Sharon petals were delicious and nutty; the Nasturtiums and Mint flowers sweet and spicy; and I don't recommend the Sunflower or Pomegranate petals - too bitter.
On the non-edible front (or at least, I’m not eating them) the datura and the morning glories were very prolific. The datura disappeared from the yard for several years only to reawaken spectacularly this year. There were many tiny seedlings that sprouted in the corner of the yard, as well as near the bird bath. I moved a few of them to see how they grew in different locations, and gave some away. They bring me such joy, with the massive white moonflowers, velvety leaves, and spiky seed balls. I know they are detested by many gardeners, but they do seem to draw an interesting group of insects, and I like their features, so I’ll probably keep them. Plus, they grow very easily, very carefree, and those are the kind of decorative plants I like. The morning glories climbed up our wild branches fence and the deep purple star shapes were mesmerizing to look at. 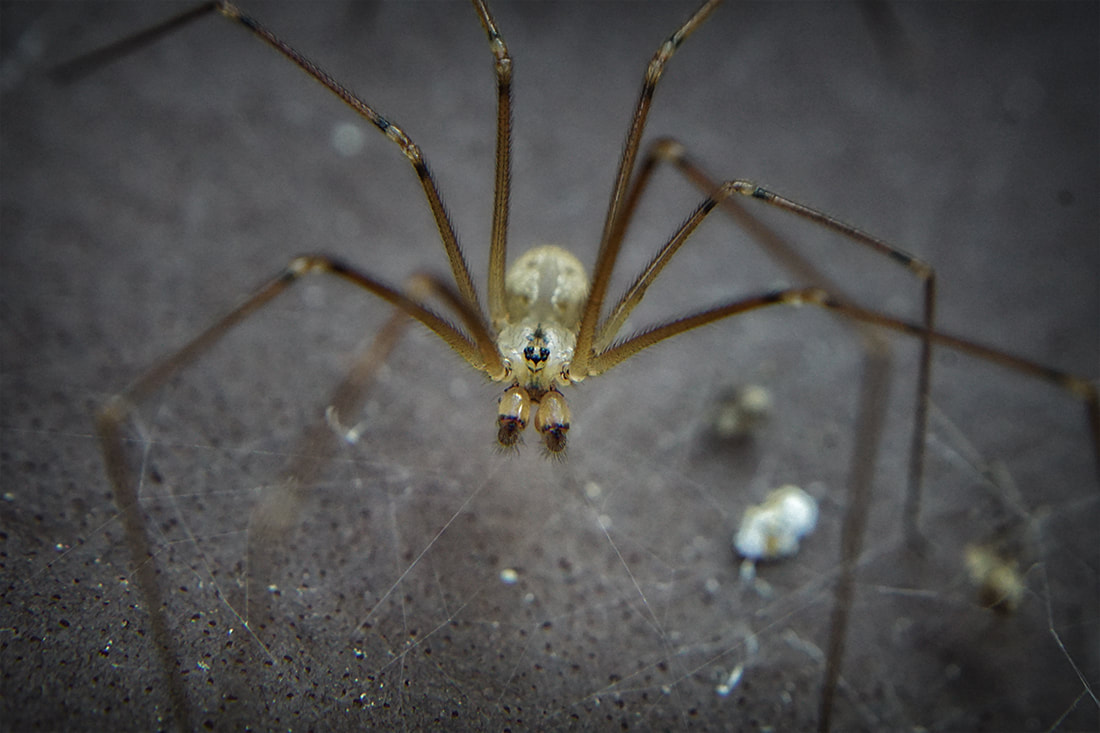 One of many spiders living underneath our rainbarrel
We added to our Halloween decorations this year, crafting a pumpkin king from “Over the Garden Wall” out of an old sunshade and some fabric. I don’t think many of our neighbors understand our questionable, strange-looking giant pum-king, but he’s pretty awesome in our book. We also put out some of our other upcycled decorations, like the plastic-o-lanterns, and my favorite ghost, made out of a giant plastic bag with some eyes and a mouth drawn on with marker. We hung it from our tree and it flew around in circles until the wind picked up and blew it out of the tree into the bushes. We had to relocate it under a trellis for a more protected spot to haunt. The boys both wanted to honor a YouTuber named Technoblade this year, who passed away from cancer and donated the proceeds from his video earnings to cancer research and his siblings’ college funds. We have a “real life” version and a Minecraft version of his avatar, which involves a pig wearing a crown. If I get enough time, I’m going to make a No Face costume for myself, and my husband is going for the Willy Wonka look. Quite the mixed bag of family costumes this year. No theme whatsoever. We also were going to work on one of the garden beds and use some huge slabs of polystyrene as gravestones, but that is a recycle project that will probably have to wait until next year, as it has been too windy and cold to work outside much this week. The kids were really happy with our decorating, even including some kid-sized chalk body outlines on the sidewalk. “Our house looks abandoned!” my older son exclaimed excitedly. “No one is going to stop here, they’ll just drive by.” Over the weekend, I was out in the yard, the overgrown garden looking particularly creepy in the dark, and I noticed three teenagers messing around with my neighbors cars, and then they went up to the door and rang the bell and ran away, off into the shadows. I heard one of them dare the others to go up to our house. “No way!” said the others. I felt a strong sense of accomplishment, that my lack of garden upkeep creates the illusion of some strange witch house that scares away the neighborhood tricksters. I went back inside and told my sons that our decorations worked. We decided it must have been the “Lipstick Potion, Pink (Not Poison)” that my older son created out of a pretzel barrel. 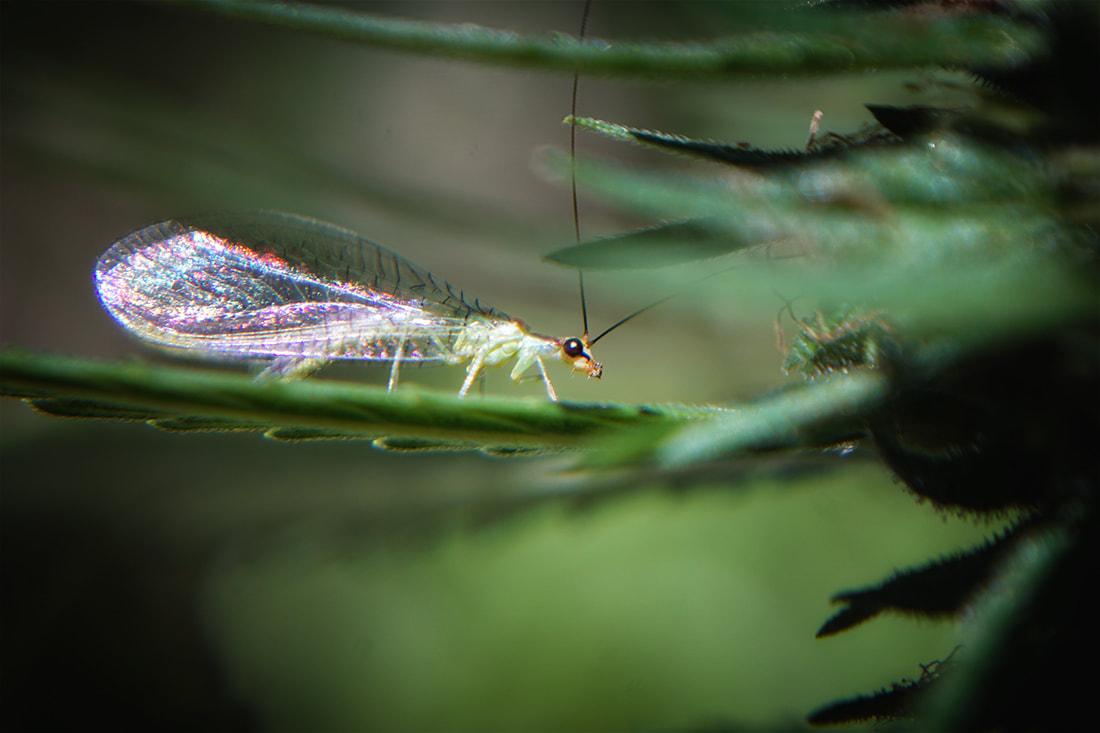 Lacewing with iridescent wing reflections
The crows came back for their yearly feast of pecans from the two huge trees down at the end of our block, where Shorty lives. They visited over the weekend, so we just missed seeing them on our walk to school, but they left cracked shells and white guano patches all over the sidewalk. (I just learned that bird feces are also called ‘guano’.) So messy, as my grandmother would say. It seemed a fitting décor for the season, though. There were a few stragglers, late to the party, and they yelled down at me with their raspy voices as I walked by, careful not to linger underneath them for longer than I had to. Some of them took off into the early morning air, their black forms like shadows flying across the light blue glow of the sky just before sunrise.

Crows are not really migratory birds, though they do often travel in large groups at certain times of year for mating or to travel to new feeding sites. Earlier in the month, I looked up into the sky from the backyard and saw this dark ribbon of crows slowly winding its way southward. They were very high up, too high for crows, I thought, but they had the distinct crow body shape, and were definitely not migrating water birds, even though we get so many coming this way along the Rio Grande, heading down towards Bosque del Apache for overwintering. These birds were not in any kind of formation, unless you can call a sort of river in the sky a formation. I learned later that crows do indeed migrate in groups together, and fly at relatively high altitudes. There were hundreds of them, stretching past my line of sight to both the south and north.

Planting tulips for my grandmother’s birthday has become a new tradition, started last year, on the first birthday spent without her. This year, her birthday has come and passed, and I still have my bulbs to plant in her honor, with cold weather and sickness hindering my gardening efforts, but I hope to get the bulbs into their sleepy winter beds very soon. I have some lovely orange and purple bulbs that will hopefully grace a corner of our garden next spring, expanding my grandmother garden one year at a time. Saffron crocus, Parrot and Princess Irene tulips, and some Schubertii allium are the new additions to be planted this year. I think they will give a nice, staggered blooming session, adding color to the early spring garden in waves.

In my opinion, the best self-help books are about gardening. I can go into a rough patch and just spending some time outside digging in the dirt gets me into a better mindset, whereas recently I tried an actual “self-help” book and it threw me into an even deeper depression. I’m going to aim for creating depressions in the soil to catch rainwater rather than depressions within myself.