To Tucson and Back...

3/25/2016
We drove out to southern Arizona, my mom and I, to help her sister move here to NM. On the way out, we decided to take a scenic route, so headed west from Socorro, past the VLA, and stopped for pie in Pie Town (of course, how could you not?). We turned down highway 191 just across the AZ border. It looked like it would be an interesting drive, a scenic byway approximating the path that Coronado took in the 1500s – therefore given the name ‘Coronado Trail Scenic Byway’. The map didn’t do its curves justice, though, and we found ourselves on it for hours, the 25mph speed limit dropping to 10… It was beautiful though, and there were places to pull off and stretch and look at the amazing landscape all laid out below. We took a short hike to look at the ‘Blue Vista’, and I took lots of photos of the native plants growing in the area (unseen fractals!). The high peaks are called ‘Sky Islands’ in that they provide a unique climate and are home to many species of plants and animals that are found no where else, isolated in their ‘island’ homes by the desert down below.

Towards the southern part of the trail, the road passes through the huge, open pit Morenci mine. I was quite in awe of the immensity of it all, and the different colors of layers that had been unearthed looked like a painting – the blood of the earth running freely from a huge, gaping wound. It was an awe-inspiring experience. The huge dump trucks carrying massive loads of earth were dwarfed by the levels of the mine, a huge city carved from the earth, stretching out for miles. We stopped many times along the way. 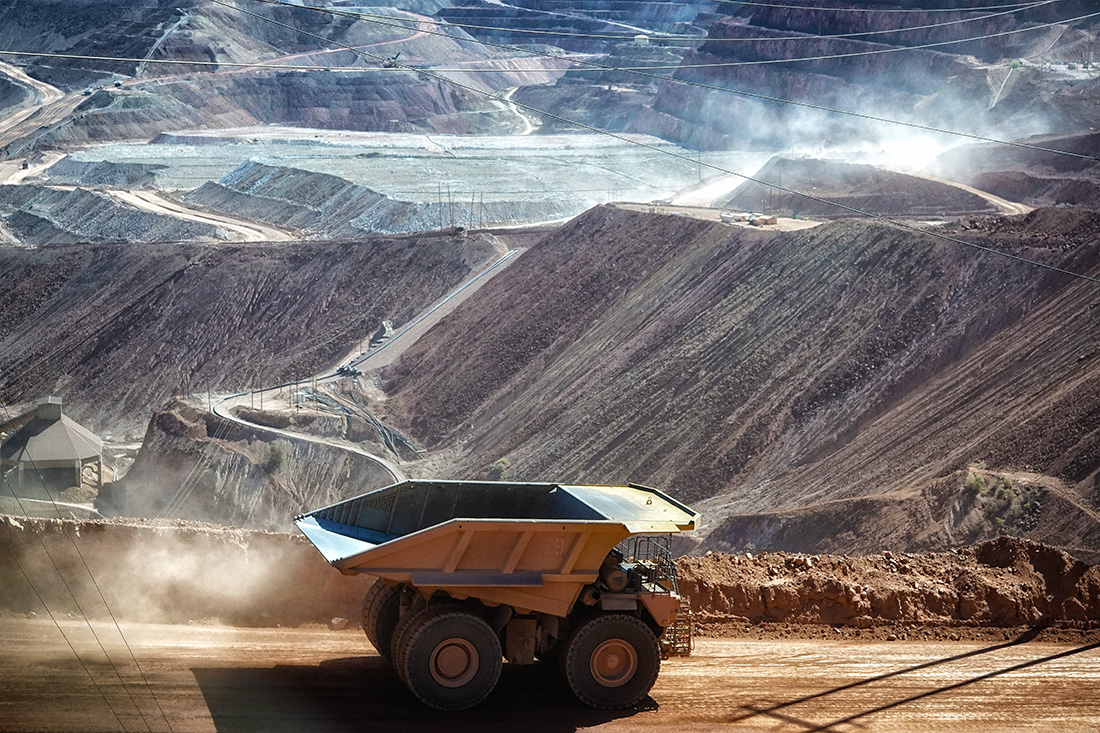 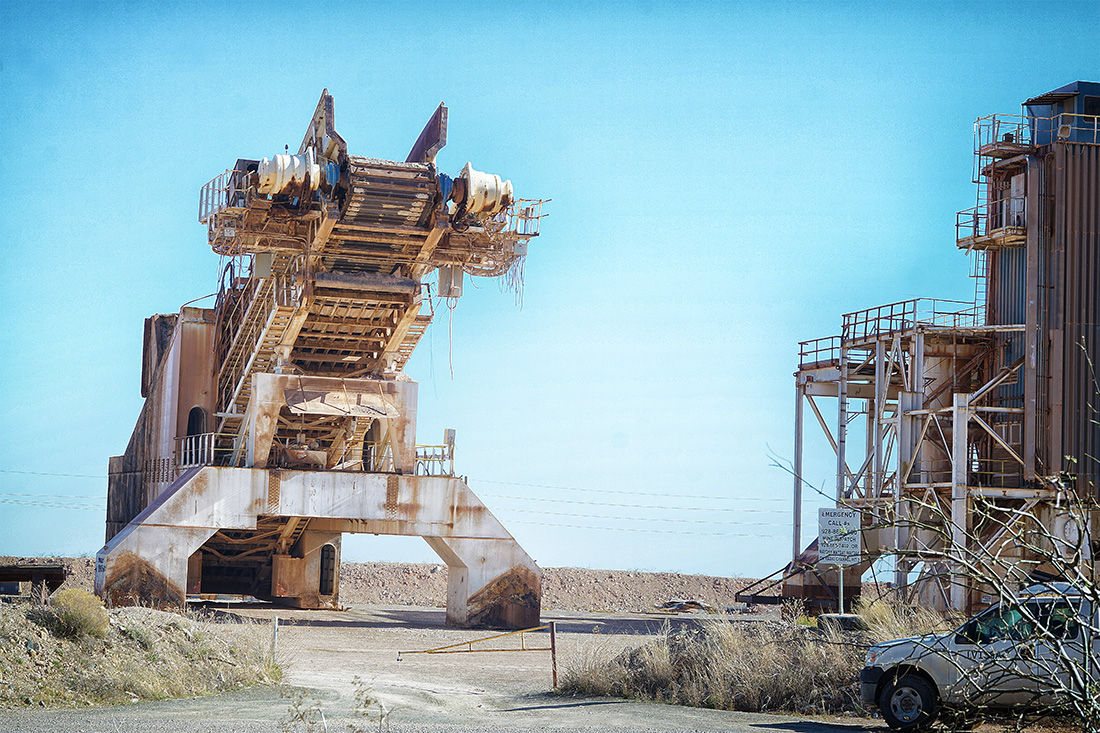 Giant Mine Chameleon, poised to eat its pick-up truck prey
On one cactus-covered hillside, an old cemetery was laid out, its collapsing tombs overgrown by iris and shrubs. It overlooked a huge parking lot where unused equipment for the mines lay – sort of a graveyard for the mines, too. We clambered about, trying to avoid slipping into cactus on the loose gravel. We got back to the car and drove through a tunnel, out into a city, built on levels like the stepped terrain of the mines, houses all in rows along the hillside. This was the newer development, mostly for workers in the mines, I assumed. The curving road led us still downward, curving down into the old mining town of Morenci, and along the train tracks and river. The little old buildings were a tribute to times passed. I saw a man lugging a suitcase up the steep steps into one of the vintage hotels along the road. 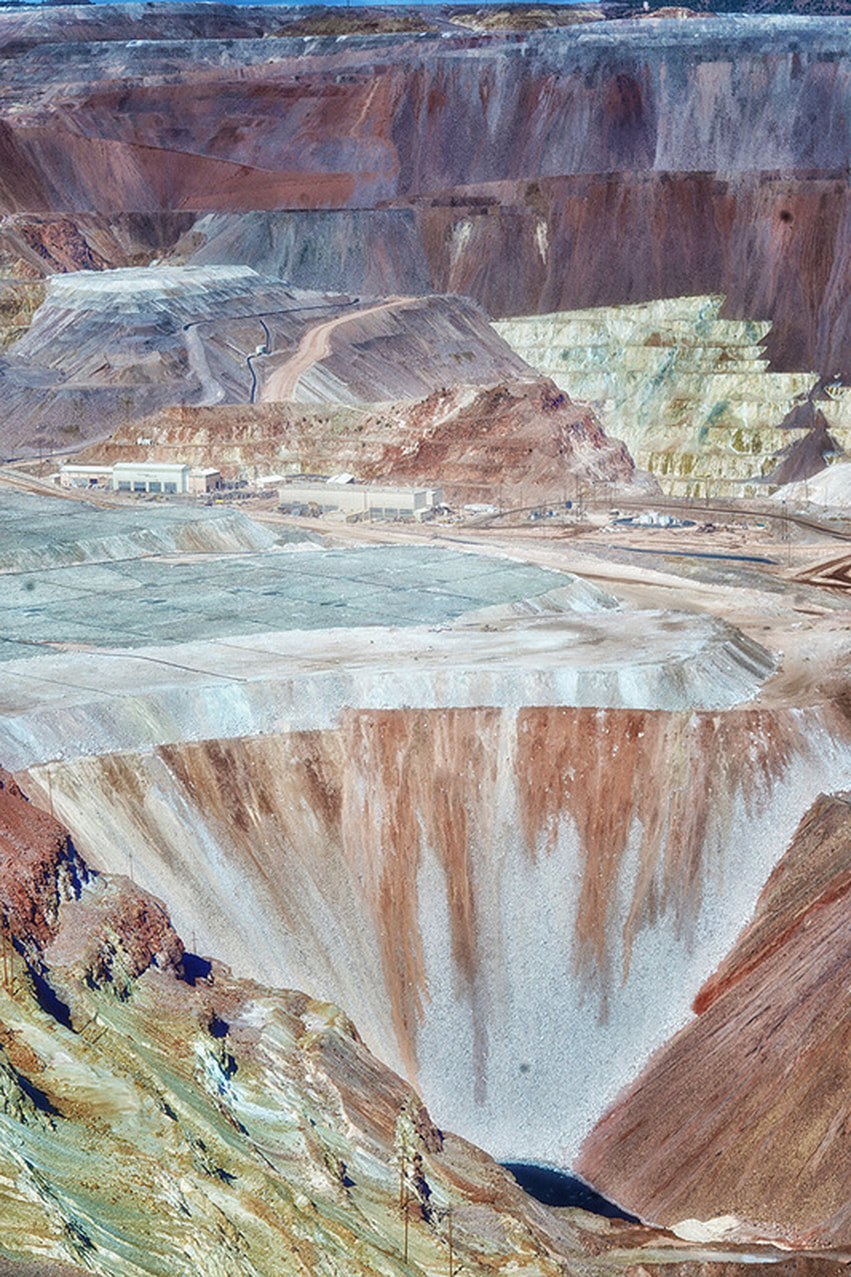 Eventually, we made it to I-10, stopped for some food, and then headed on towards Tucson. There were incredible swaths of wildflowers along the roadside. Huge groups of magenta spikes, blankets of purple blue, and many yellow mounds in varying sizes. We stopped for the night about an hour east of Tuscon, then were up early in the morning to complete the drive.

We went out to breakfast, the three of us, after we picked up my aunt. After that, we headed back to her place and commenced packing and loading up the two vehicles – hers and my mom’s.  We were done by 1pm, and decided to get in some miles that afternoon. There weren’t many options for non-fast-food along the way. I exited at Bowie (why not?) and we drove through, the abandoned buildings and huge pecan orchards beckoned to be photographed, but alas, I drove on, no sign of food. We drove until Lordsburg, just into NM, and stopped for food. There was talk of staying there, but I was anxious to get home. I hadn’t been away from my little one this long, ever, and was missing him and his papa. I went to call them. When I got back, my mom and aunt had decided that it would be nice to get to T or C that night and soak in the hot springs. I decided that it would be worth it to wait another night to have a nice soak. It looked as though T or C was only about 2 hours away… so we continued driving.

We took the cut-off between Deming and Hatch; it got dark as we started out on that road. I was leading, and drove slow, as I was unfamiliar with the road and it was really dark out there. Halfway through, these groups of red blinking lights emerged from behind a hill. A vast group of them, out in the plain. They would blink at different times, some together, some by themselves, all giving rise to their existence again and again, like fireflies in the night. As we drew closer, I could see that they were lights on the center points of huge windmills. A wind farm. It was an eerily beautiful experience, watching the huge white blades come out of the darkness. For some reason, it reminded me of flying into Amsterdam one early morning, the lights of the city illuminating the fog from below.

We continued on to Hatch. I was distracted by a shop (closed) that had all these statues and things outside, so missed the turn left to go up to I-25. As I had received a speeding ticket on the way out (I hadn’t seen a speed limit sign, so was following a large gravel semi, and only when I was pulled over with the flashing lights behind me did I see the 35mph sign up ahead… sigh.), so I was very conscientious about my speed for the rest of the trip. We continued driving, leaving Hatch, and a cop car passed in the opposite direction. And immediately swung around and turned on the lights! I thought, WTH! I’m not doing anything wrong… We pulled off the road, and the officer came up to my window. I was at a loss. I was driving my aunt’s car, but had all the paperwork with me. The woman officer asked me, “Did you know one of your headlights is out?” Whoosh. I didn’t know. Would it be ok if I followed my mom? She said it would be better, but I may still get pulled over for it. I said I understood. She then asked where we were going, and when I told her, she proceeded to tell me we were going the wrong way. We had missed the turn. So, she said that we could follow her and she would lead us back to where we should be. She got in her car, my mom followed her, and I followed my mom. Very nice lady. I was so grateful.

We drove another half hour or so on to T or C. It was about 9:30 when we arrived that night. We went to a place where my friend had stayed, where they have hot pools built up outside the rooms right along the river. I thought it would be magical to soak in one of those pools after a long weekend of driving. We found the place no problem. The only problem, other than the car lighting issue, was that it was also Saturday night AND spring break weekend… So there were no places available to stay in T or C at all. (Well, there was ONE little rundown motel that didn’t have a ‘No Vacancy’ sign up, but it was vetoed for the reason that we wanted to live to wake up the next day.) We drove on to Elephant Butte, just a few miles north, and ended up grabbing up one of the last rooms at a resort there. It was a very nice room, and I didn’t care anymore, just wanted to sleep. 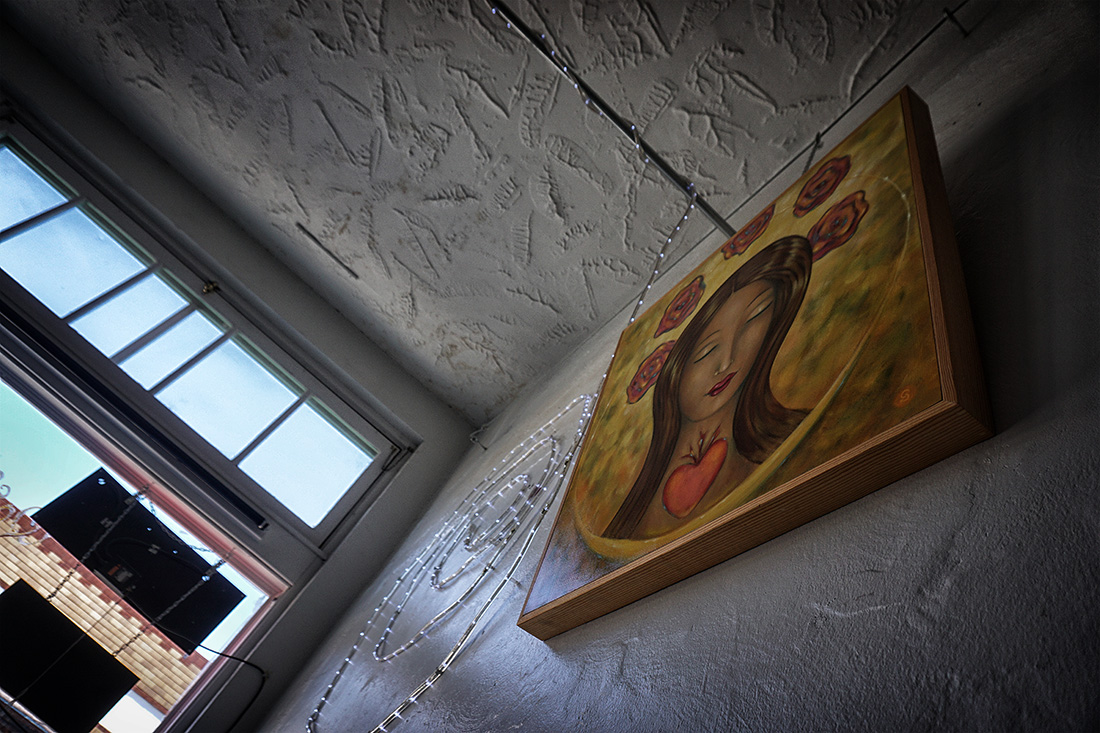 We woke up earlyish in the morning, and got ready leisurely. We headed back into T or C for some breakfast and to soak in the springs, finally! We stopped at the Passion Pie Café, which was amazing! I had quiche and soup and chai. It was all so good. We went over to La Paloma, which was recommended by both the lady at the counter at Passion Pie AND the gentleman who owned the shop next door, Dust and Glitter (a cute little vintage clothing and oddities shop). La Paloma was AMAZING. I want to go back and stay and soak there. One day, I’ll bring my two guys back there (they allow children to stay in the rooms, though not soak in the springs, unless they are 7 or older). We headed out from there. I was excited, as this was the last leg of my journey, back home to Albuquerque. Up ahead, a big, purple plume of smoke rose and drifted on the air currents. As we drew closer, I could see two distinct columns of smoke rising – one black, one white, and they mixed to create the purple I had seen from a distance. Still closer, the source of the fire was evident – I could see the flames licking the tops of the cottonwoods along the river in the bosque just north of Socorro. There were so many areas affected by fire along our journey. This was the freshest of them all. The others had happened years ago, along the highways in Arizona, huge acres of pines burned. I reminded myself that though in some ways, seeing the destruction of the forest is hard and the remains can be viewed as ugly and scarred, new growth always comes from the charred earth. Some seeds spring open only when touched by fire.