9/9/2020
We started full-time homeschool this year. When classes resumed and we weren't continuing online, as we had at the end of the last school year, I felt a pang of worry - did I make the right decision? A tiny bit of doubt clouded my mind. But then virtual learning was extended through December, and we started our lessons, and we've ridden the wave for a month now. Lessons inspired by my son's interests, and things just took off from there. We have a whiteboard where we write down the ideas, and then I create plans from that. We've been working on volcanoes since the beginning of school. There is so much to learn. Geologic features. We built a composite volcano and a shield volcano in the back yard. We're learning about the different kinds of rocks that are created in a volcano. Geographic information. We found Pompeii on the world map, and drew in the Ring of Fire. We're going to look at the volcanoes that are on the edge of our city - dormant... though now there is a certain fear of surviving a volcanic eruption, so we are reading How to Escape From an Erupting Volcano. We imagined our house as the volcano evacuation plan map. "Over there to the kitchen are the roads to Stabia - those are safe!" "The fish tank will be Vesuvius. That's the road to Vesuvius. Of course it leads to death! Why would anyone go towards an erupting volcano?!" There is plenty of reading involved, and lots of note-taking on the different articles we read, as well as a 'VOLCANO' acrostic poem, and some very interesting notes on explosive experiments. There is math to be done: elevations of volcanoes, both from sea level and sea floor; how long ago was the last eruption; calculating times using A.D. and B.C. (or C.E. and B.C.E. - we talked about both sets of terms).

We read a lot, too. Just for fun. While much of our reading is followed by, or complimented during, note-taking, retelling, or making predictions, we reserve time to just enjoy reading for the sake of it, no expectations. It has worked wonders. My son will turn down screen time (not EVERY time, but he's NEVER done it before...) to READ. He's been staying up to all hours of the night, devouring all the books in his room.

Somehow intertwined with all this volcanic activity is the thread of the atomic bomb... How it destroyed cities in Japan, how it is connected to our home, New Mexico, as the birthplace of the bomb. We are reading Sadako and the Thousand Paper Cranes, and have made cranes for every day since Peace Day on August 6th. I've started a new flock above my bed, and they are so peaceful to look at, each spinning on their own air currents. My son took to origami well, and started asking to make different models after our cranes were folded. He now has started a flying 'jumping frog' flock above his bed, and I think the concept is very creative, if not unusual. He asked how small the smallest crane I could make would be, so I made him one that his Lego character can hold in its hand and it looks perfectly to scale. The next day, he proposed we make a giant crane - as big as the house! I said we probably couldn't make one as big as the house, so he said he'd be okay with one as big as the bunk beds. We settled for one that would be as big as however big a paper that took up the whole floor of our smallish play room - 12 sheets of newsprint editing paper taped together. So much tape. The kids crawled into the folds, inside of the paper together, as we folded our giant bird, giggling and rolling about as we moved through the motions. It is the biggest crane I've seen. It sits, perched on our piano, its wings span the length of the keys, and sometimes I forget it is there and it catches me by surprise as I come out of the kitchen. A giant paper pterodactyl watching me. 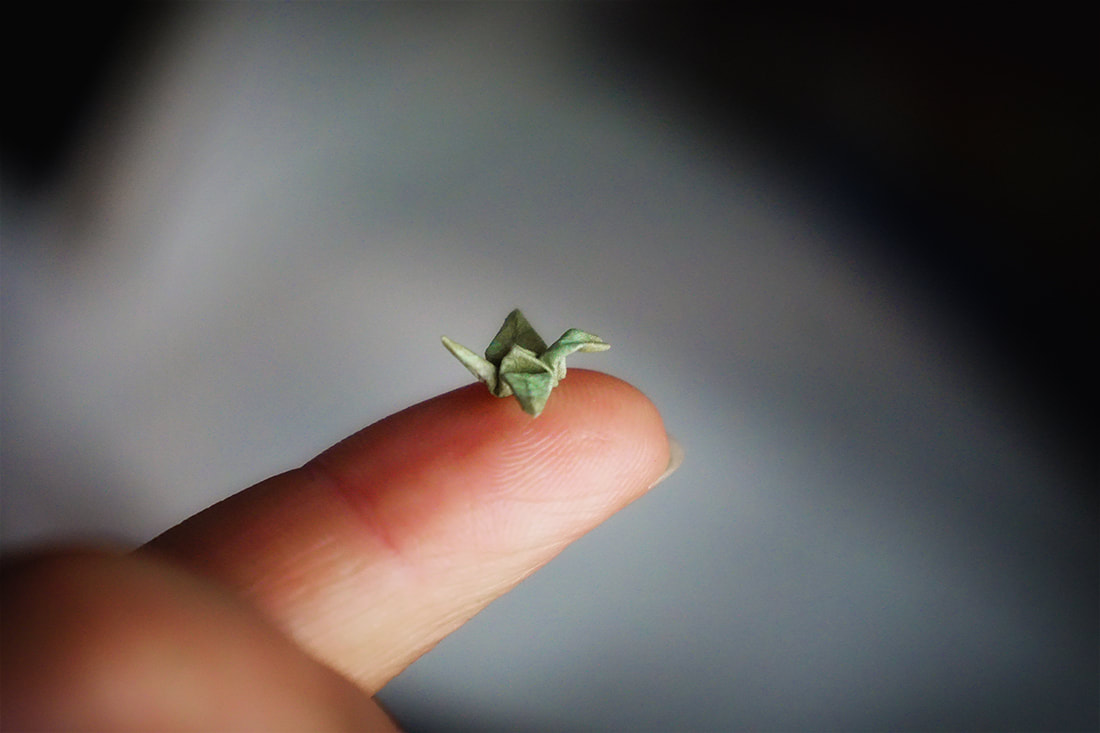 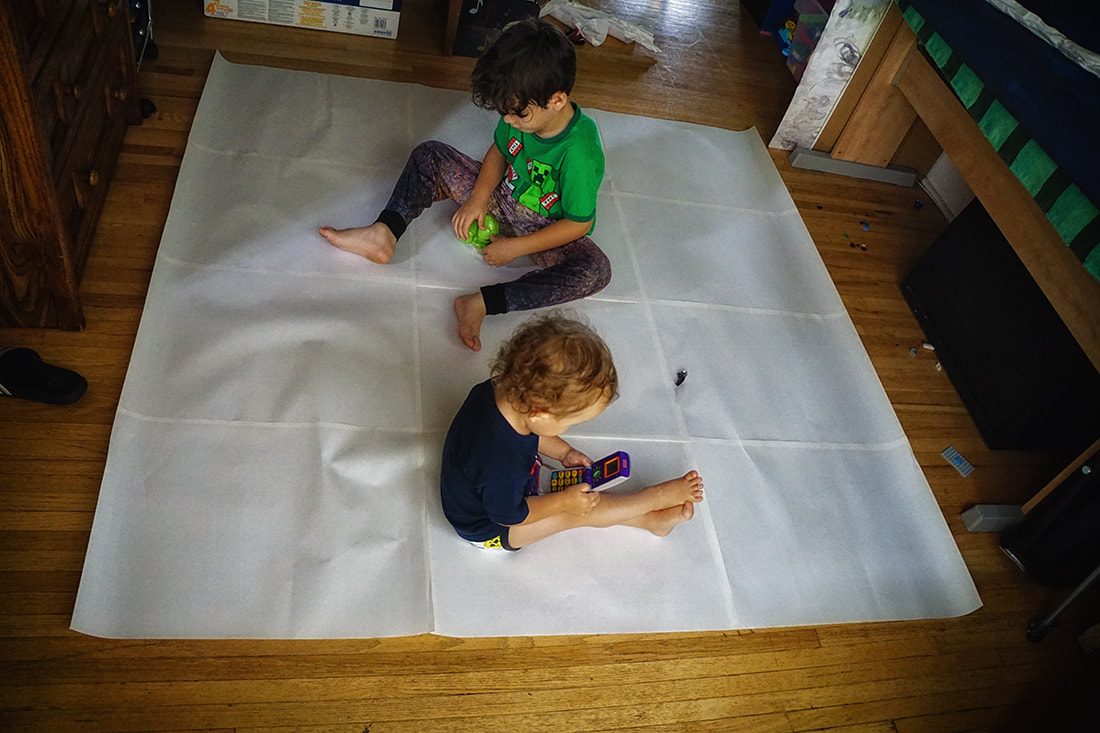 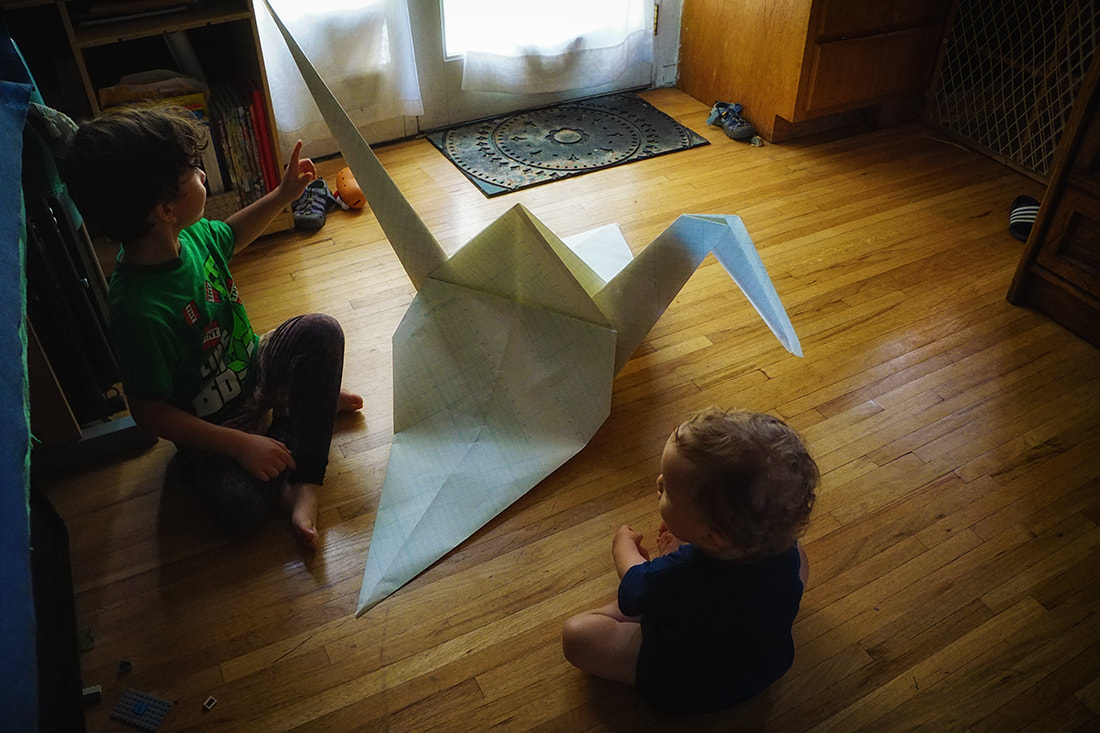