Portrait of a Lizard... 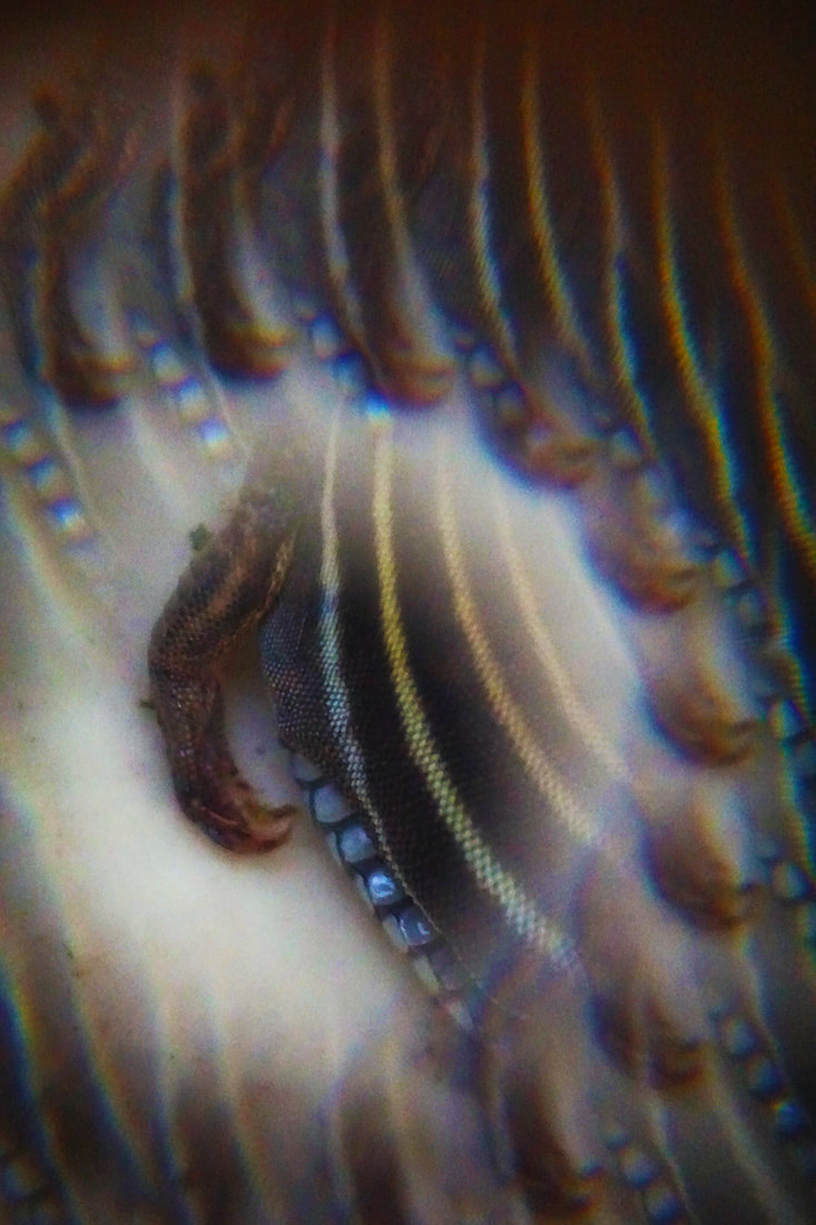 Portrait of a dead lizard through kaleidoscope.

One of the gifts my son received upon completing his 5th trip around the sun was a little wooden prism/kaleidoscope shaped and colored like an Amanita mushroom. It fits nicely into my 50mm macro lens, so I started using it to take some photos with the effect of reflecting multiple images of my subject onto the same photo. My husband came across a poor dead Whiptail lizard in our yard – in an old sink waiting to be turned into a fountain. Perhaps it was injured in the hail storm a few days ago, or who knows what led to its demise, but it seemed fitting to give it a kaleidoscopic tribute in photos before giving its body to the vinca vine.

In many ways I find death beautiful. My body of images of death has grown considerably over the years. Soon I will yet again be walking that fine line between life and death, with the birth of my second child. The act of creating life, of bringing forth life to this side, is intertwined with death in a web of gossamer threads. I come to the abyss and look over the edge, trusting my fine thread will not come unraveled as I make my way across to the other side. So fragile, one strand becoming two somewhere in the process. So much can go wrong at any step, and yet, so often, so much goes right, but it is easy to drop off and never return.

Five days I labored in the darkness, and when my body would not yield, five minutes under bright lights on a hard metal table and a new portal was cut into my flesh to allow the passage of my child.

The lotus child cuts through the mud.

I held my breath until I heard my child take his first, and held him for but a moment, and he stared at me with large dark eyes. Such a beautiful child, I couldn’t believe he was mine. My arms felt like they could not hold him, and out of fear of dropping him, I asked my husband to take him. My grasp on my thread of life was quickly loosening, and as the blood drained from my body, the lights above me were the most beautiful ethereal blue, drawing me into them. I heard beautiful singing – I thought it was my husband singing to our child, and in that instant I felt at peace. It felt so right that I should leave, and I knew my child was in good care. (I later asked my husband what song he was singing, and he said he was not, he had been terrified of what was happening.) And yet, some part of me caught on to the thread and pulled me back down. I felt a rush of vomit rising, and thus began my slow journey to healing myself.
Both my first child and I had lengthy hospital stays. There was fear for both of us that we may lose our grasp on the mortal thread, but we passed the test. We came out on the other side of the chasm, scarred and changed, but we emerged. Several days after the metal table, I sat in the hospital cafeteria having breakfast with my father. My son was still not able to go home. I saw the anesthesiologist who had attended me walk in to the room, and remembered how white his shoes were that night when my son was born. As the table became saturated with my blood, soaked bandages and swabs, huge crimson blooms went into the buckets hanging from the metal tree by my side. It ran off the sides, and spilled onto his pristine, white shoes. That day, in the cafeteria, he still wore those shoes, now stained brown with my blood. I wondered how often he had to buy new shoes.
My goal with this upcoming birth is obviously not death, nor is it to have yet another portal cut into my body, but I will do what is needed, if it comes to that.  I have optimism for a better outcome for both myself and my child waiting to come forth.

As I approach the chasm, I am not without fear or doubt, but I do feel a sense of calm and I take refuge in that.

See you on the other side.