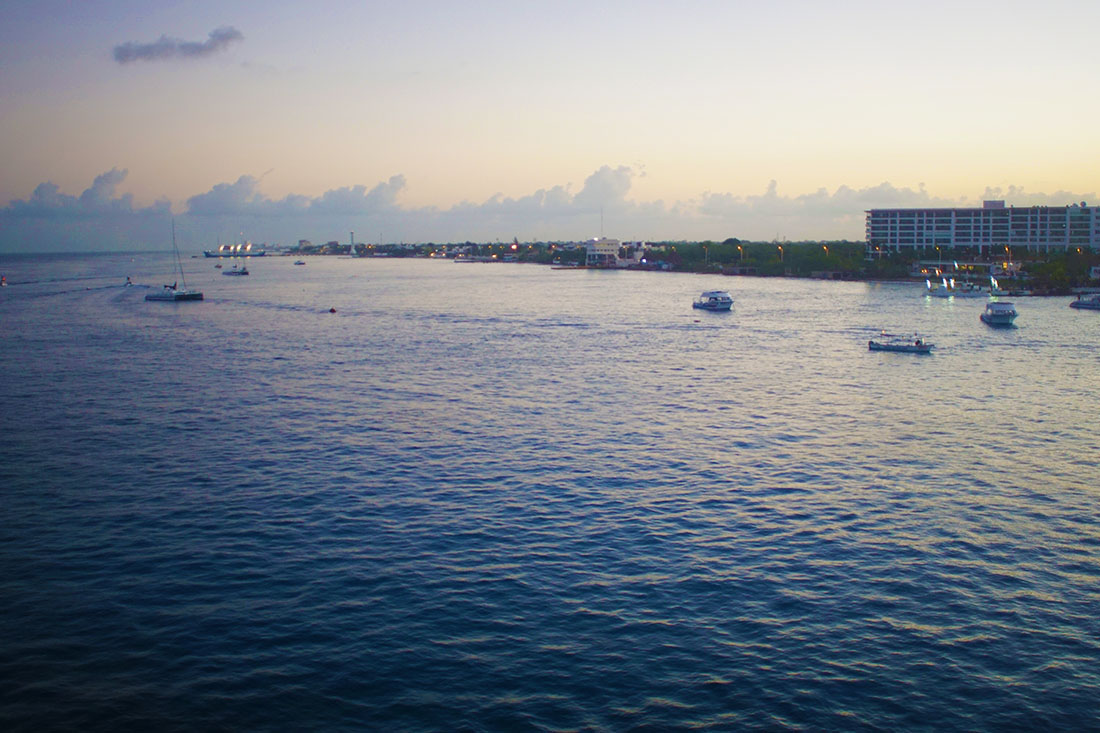 The initial cave exploration was of a rather small area. There were more caves connected to the main part, but the entrances were so low in the water that it would be impossible to pass through with the float vests on. We made our way back out to the steps out of the water. It was really chilly in the dark of the cave, but as we walked out into the sunshine to go to the next cave I warmed up again.
Xibalba, or the underworld, was the name of the next cave. We walked in through a long walkway, with different formations lit up with colored lights. As we walked further into the cave we came upon a big sink hole, open to the jungle above us, and the natural light was streaming in in shafts. I was kicking myself for not having a camera. It was beautiful. We walked through the sun rays and onto another wooden deck and to the jump off point (or the steps) into the water. A photographer followed us and took posed shots along the way, with cave formations strategically integrated into the frame. It was Mike’s turn to go into the water this time, so everyone got in again (Luigi jumped in). After the group moved down the passageway into another section of the cave, it got very quiet sitting alone in the semi-darkness. There was enough light from the sky opening to illuminate much of the area we were in, and we could see bats flitting back and forth and guppies and catfish swimming in the water. It was peaceful sitting there, and I sat down lower on the steps in the cold water, just to be at one with the cleansing energy. We told stories in the cave and listened to the water dropping. After a while, the group came back. One of the ladies – the wife of the complaining guy – said, “too bad you missed it” and I didn’t know how to respond so I said nothing. I didn’t feel that I missed anything. There was nothing better than getting to spend that time in the cave with my child. It was exactly where I should have been at that moment. We all walked back and returned our gear and got dressed to go have lunch in one of the caves. It was a buffet lunch, with tamales and beans and juice. Simple, but good. We took some more pictures (I convinced Luigi that I needed to go back into the caves and take photos, though the cool shafts of light were gone from the hole in the roof when I returned) and were subjected to a tequila tasting. No one bought any of it, and the small amount I drank as a sample didn’t leave me feeling very good in the heat of the day. 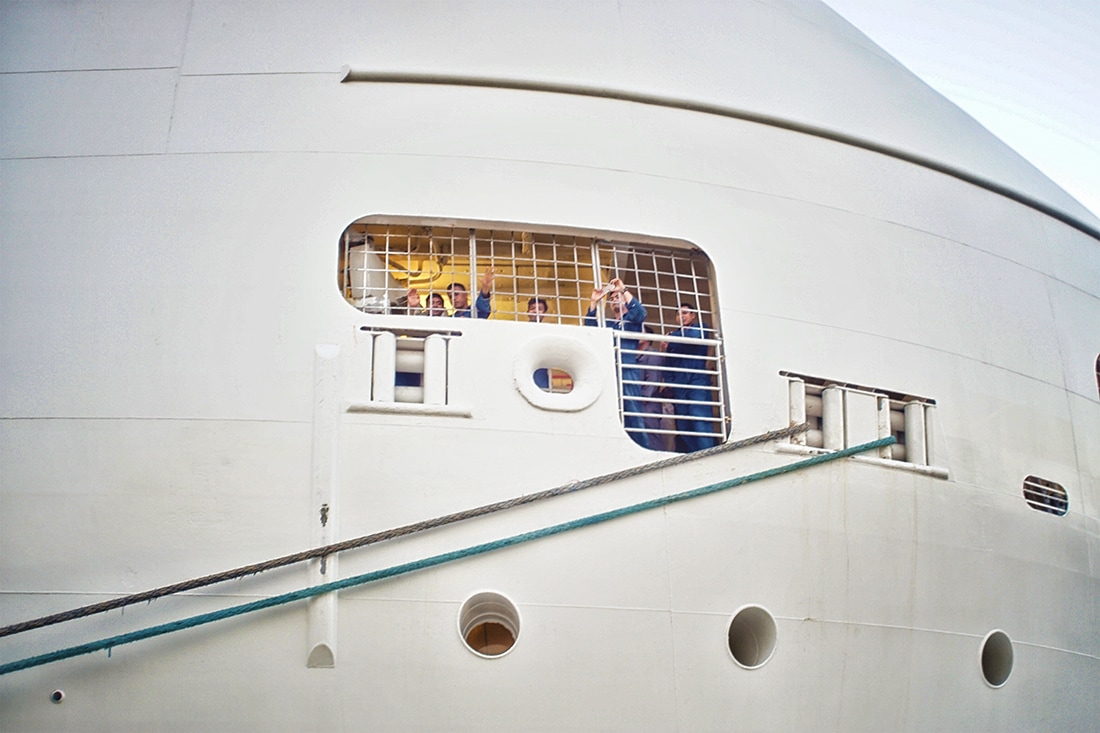 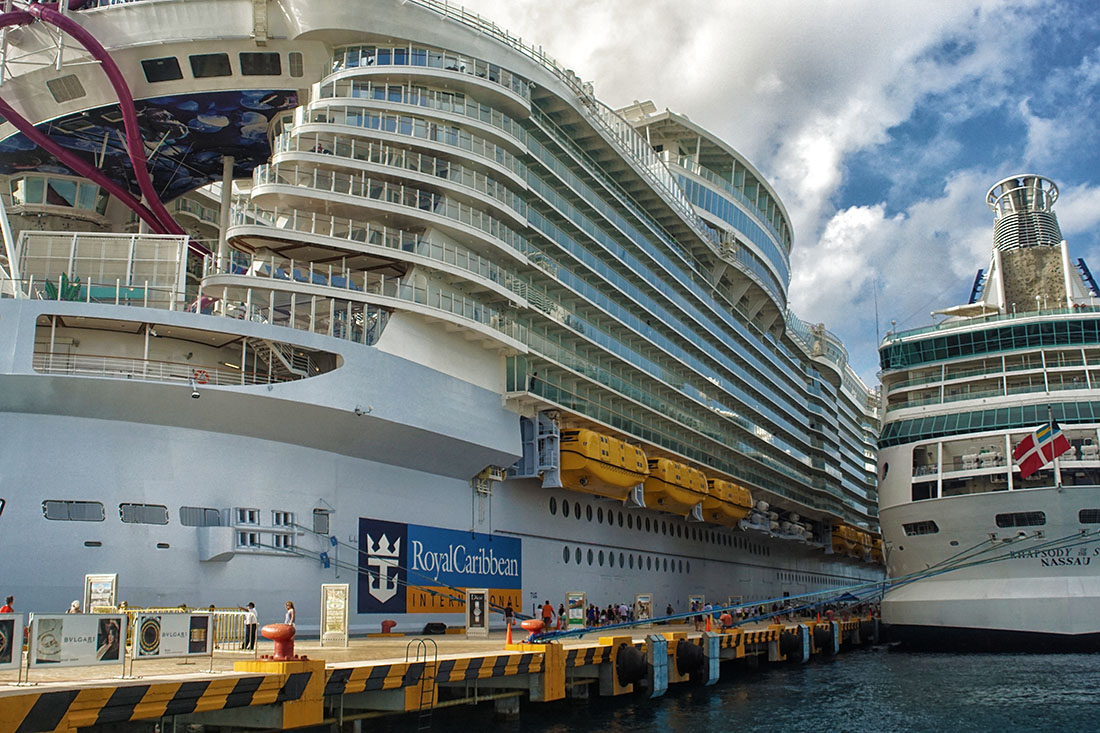 We drove back into town for our shopping time. I still wasn’t super excited about exploring too many of the shops, so we wandered around town. There was quite a bit of awesome public art around. We went on a little adventure documenting as many murals, decorated cars, and sculptures as we could find. It was soon time to get back to our water bus for the last ferry back to Cozumel before our ship was scheduled to depart. We were supposed to have a little time on Cozumel before we needed to be back on board, and I was looking forward to exploring the island just a bit, since we’d not had the chance to see any of it, leaving first thing in the morning for the mainland. Unfortunately, a couple folks who had gone on an over-land excursion from Belize and were set to get back on board here in Cozumel had become delayed in traffic, so we had to wait for them - part of the benefits, and drawbacks, apparently, of booking excursions through the ship. There had been some shootings in the area just a couple days before we arrived, so security was tight. We sat there until they arrived, and then took the ride back to Cozumel. This time, we sat in the interior, where they had no windows and a large TV playing random videos of reefs and boat safety. I began to feel very sick from the bouncing up and down on the waves, so I tried closing my eyes. The folks that we’d waited for sat down next to me – the younger couple that had sat there previously decided they wanted to go up top, so those seats were vacant. Their large rolling suitcases rolled back and forth along the front of the seats as the boat jumped and rolled. I grabbed one just before it struck me in the shins, asked the woman if she’d like me to lay it down on it’s side, and she responded that it wasn’t hers, it was her friends, so I put it over, and there it stayed. She asked me if there was a bathroom on the boat and where it was. I told her I knew there was one, but didn’t know where it was. She asked me how much longer the ride was going to be. I told her maybe five minutes (in my hopeful state, I figured I wouldn’t make it much longer than five minutes before my stomach gave back it’s contents). We docked shortly after, and there was no time for exploring. One of the crew members was there as we got off the water bus to instruct us to go directly to the long line leading up to the security checkpoint. We waited in line. I still had food in my bag, and I saw trash bins with sandwiches and other foods being tossed, as well as a huge rack where any alcohol bought in port was stored for transport onto the ship, where it would be returned at the end of the final day. I put my bag onto the conveyor belt to be scanned. I really didn’t care if they decided they needed to toss out all the snacks left in there, but they didn’t even take a second look at it, and gave it back to me without looking inside physically. We walked on and boarded the ship.

The last day on board before we arrived back in Tampa the next morning was a bit of an uneventful blur. We slept in for a long time, watched some cartoons in the room, got some food, went up top to the ‘giant’ bubble blowing activity, and I hung out on Deck 5 for most of the rest of the time, taking pictures of the crew cleaning the deck and windows and trying to get good shots of the flying fish leaping from the wake of the ship. I definitely saw a shark, or a very large fish, some trash, lots of macro-algae, and a few sea birds. That evening, for our last supper, the newbies – us and the Canadians – exchanged contact info for a photo and ideas of correspondence (I’m not sure the photo ever came through from them, so therefore we had no way of corresponding with them, and I’m not really broken up about it…). The other couples, the veteran cruisers and the folks from North Carolina said cordial goodbyes, but made no pretenses of keeping in touch, which was fine, too.

We got into Tampa at 7am the next morning, and had to drag ourselves with our bags out to the theater for our assigned disembarkment time. We ended up sitting in the theater for almost an hour before we were able to leave, looking at the folks in front of us compare First Lady and First Daughter inaugural gowns, because that was obviously the most pressing issue at the moment. Once we got to leave the theater, everything moved quite quickly. We got to jump ahead of the line for customs because we were traveling with the young kid, and no one wants to listen to a whining kid (in case he started up). Then we got to jump ahead of the taxi queue for the same reason. We’d decided to head straight for the airport, as I had no idea how long it would take for us to get there and get checked in. Our taxi driver was nice. He told us that his first fare of the day was a woman who asked him to roll up the windows and turn on the heater. It was 65 degrees – cold for Tampa. He said he’d close the windows, but not turn on the heater. He had a thick accent, from eastern Europe or Middle East, and told us he’d moved to Tampa a few years ago. I asked him where he moved from and he said “Missouri.” We drove by a massive “Make America Great Again!” banner hung along side the highway, then we were at the airport. It didn’t take very long. We got to skip ahead to the front of the security check, too, so we ended up with about three hours to kill before our flight. We had lunch at the restaurant in our little wing. (Not too many things to do in our little concourse, unfortunately. There were signs for the hundreds of shops that they were anticipating opening sometime that year, but as of January, none of them were there yet.) We sat around. Then it was time to board. We got on the plane and took off. Within five minutes of takeoff, the Sunshine Skyway bridge was quickly moving from view and we were on our way home! 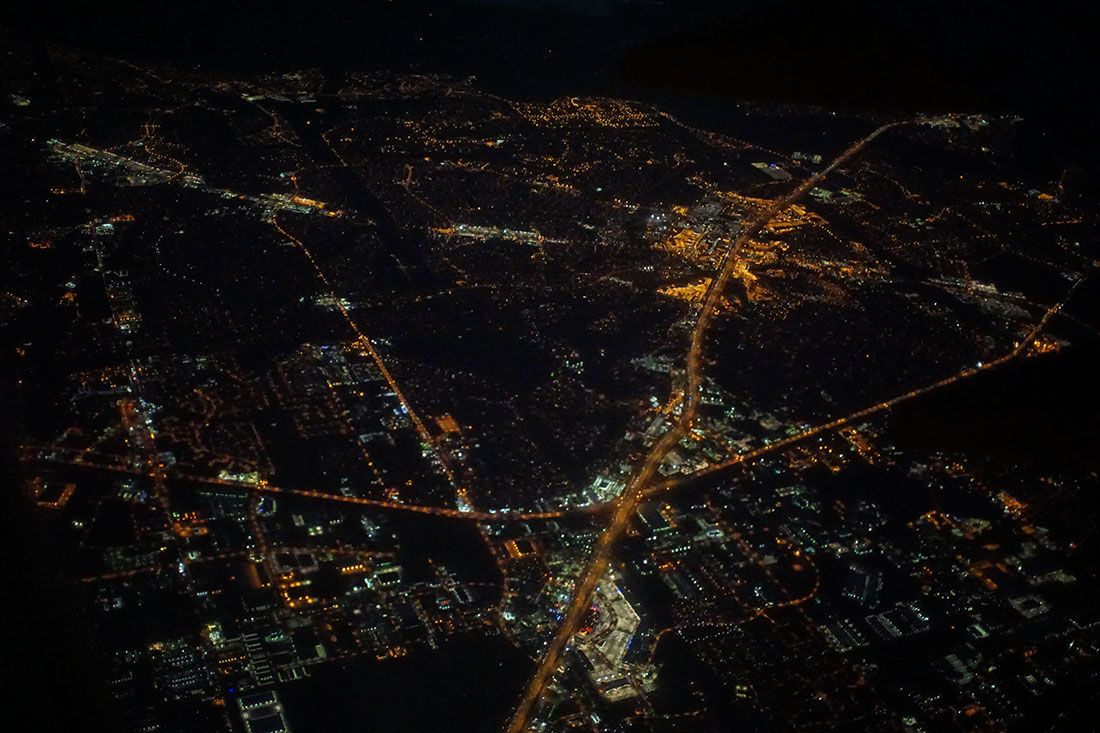