Planting of the Mother... 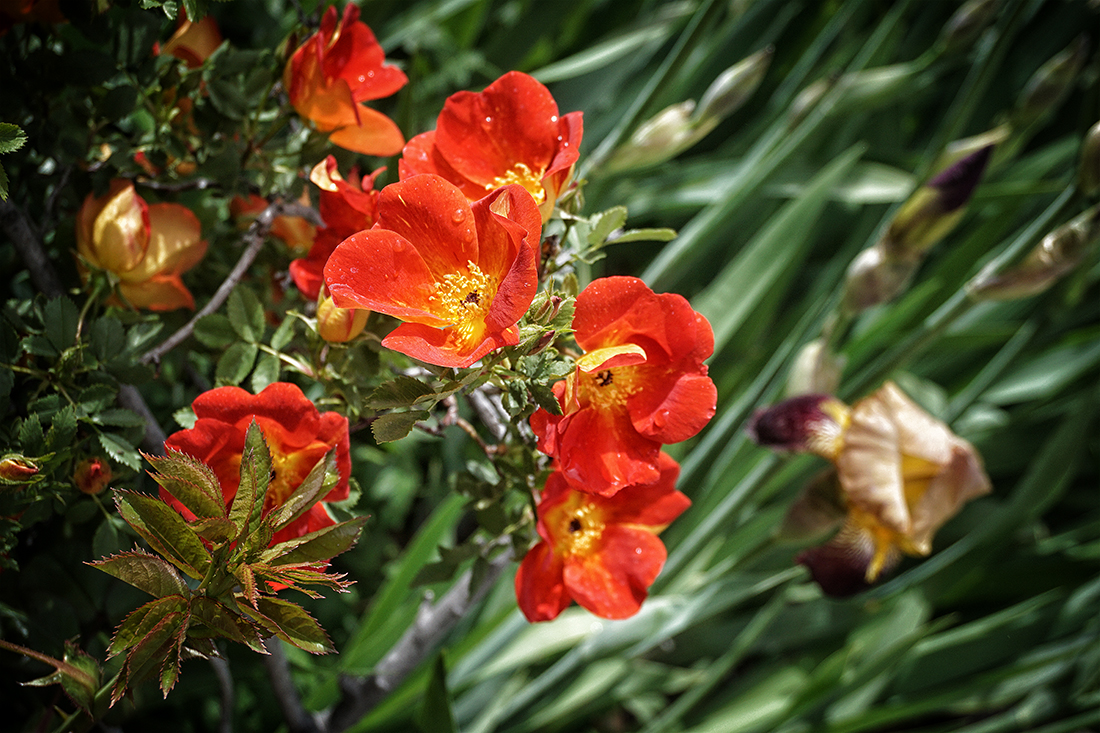 This Mother’s Day was magical. Not only did I get to spend this day with my mother and son, but we got to spend it planting the Mother corn at Mer Girl Gardens! I’ve been absolutely in love with the Gardens since I first visited the summer of last year. I was working on a series of Rio Arriba County agricultural profiles, and Ron Boyd of Mer Girl was the first on my list. (Read my article about the “Johnny Appleseed of La Villita”  here﻿.) Ron is amazing. We need more folks like him in this world. I am honored to know such an individual – he is dedicated to his work, to the land, to sustainability. He grows crops mainly for seed, and he has a tremendous variety of heirloom and ancient foods, all grown on his organic farm in La Villita, located off the highway between Española and Taos.
The grounds at Mer Girl Gardens are incredible. Roses, iris, countless other flowering plants and herbs surround the courtyards in between the houses. The main house, where Ron lives with his wife and partner in homesteading, Debora, is an old stagecoach stop, beautifully restored with the vintage elements showcased prominently. Debora installed some artistic tile work in the kitchen and pantry, and you can just feel the history in the place. The smaller house on the property is available on airbnb (https://www.airbnb.com/rooms/2865335). If you get the chance, visit this amazing spot! Great if you can stay, but of course it is rewarding to help with the planting or harvesting – farming is for the community, by the community! No one person can do it all by themselves.
The planting of the Mother corn was a fairly big event. There were several people there to help with the planting, as well as a group from Seedbroadcast.org doing a story on the planting (they are doing a series on farming in our bioregion, and are following the ongoing stories of a few different farms/farmers from southern Colorado to southern New Mexico). They had their fantastic (should I say van-tastic?) converted bus out on the property, and we had fun exploring the drawings and publications inside. There were even little desks with headphones where you could sit down and listen to different podcasts and watch videos produced by the Seedbroadcast crew. There was also a small group of people who were traveling across the country and just happened to be there by some miracle of timing. There were cameras everywhere! It all was being documented. I’d brought my camera, too, of course, but I’d brought mine just for personal reasons (that and I usually carry a camera with me almost everywhere I go these days).
We all gathered out in the field, and began the process of removing the dried corn kernels from the cobs. These were the ears of Glass Gem grown last year on the farm, and much of the seed was sent off to Baker’s Creek Heirloom seed company, though some of the best and most diverse was held back for this year’s planting. A woman walked around with a sage smudge stick and sent smoke blessings across all of us and the corn. It was quite a magical event, almost more of a sacred ritual.
(The corn is probably taller than I am by now. It’s funny how time flies and things get pushed aside and forgotten. I’m blowing off the digital dust from these photos, considering they are almost 3 months old now, but I’ve finally gotten the time to devote to writing a bit more about these particular photos and to edit the shots I picked out. My personal editing takes a back seat to client jobs sometimes, and that is just how it is when it is busy.) 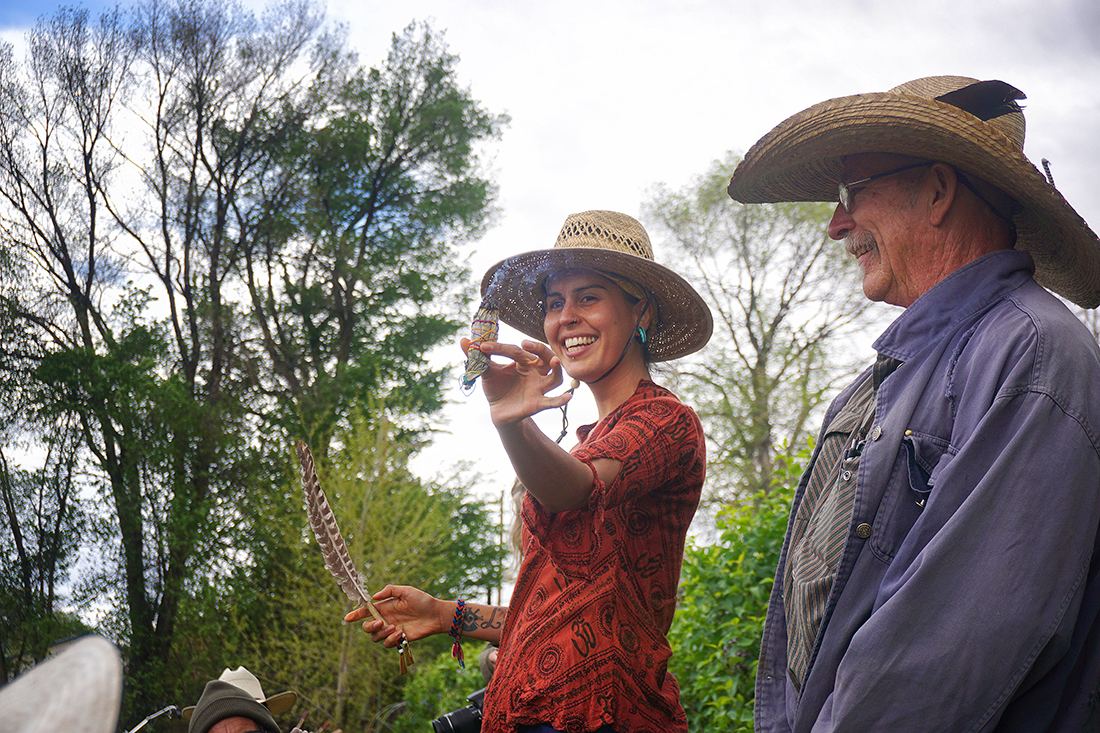 After the kernels were freed from the cobs, we mixed all of the seed together, and then each of us, or each small group, scooped up a small bucketful to take with us to our row. Ron explained the planting process to us. At the end of each row was a planting stick. It was cut to the length equal to the spacing distance between holes, and it had a carved notch at the depth the seed should go. After a few repetitions, it became really easy to quickly plant the seeds. Push the stick down into the row, down to the notch; drop in two kernels; cover the seeds. Lay the stick down with one end at the hole you just finished, and make the next hole where the other end of the stick lay. Repeat. We all moved down our rows at different paces, and then it began to rain. It really was a blessing, having the rain to welcome the seed as it was placed in the ground, but we all ran inside the farmhouse to have a fabulous feast that had been prepared for all of us. Fresh greens from the garden, cornbread and posole made with the Glass Gem corn (and honey from one of the hives on the property, for the cornbread), and some of the hard apple cider made from the heirloom (and virtually unknown varieties) apples from trees planted on the grounds. We made new friends over wonderful food. 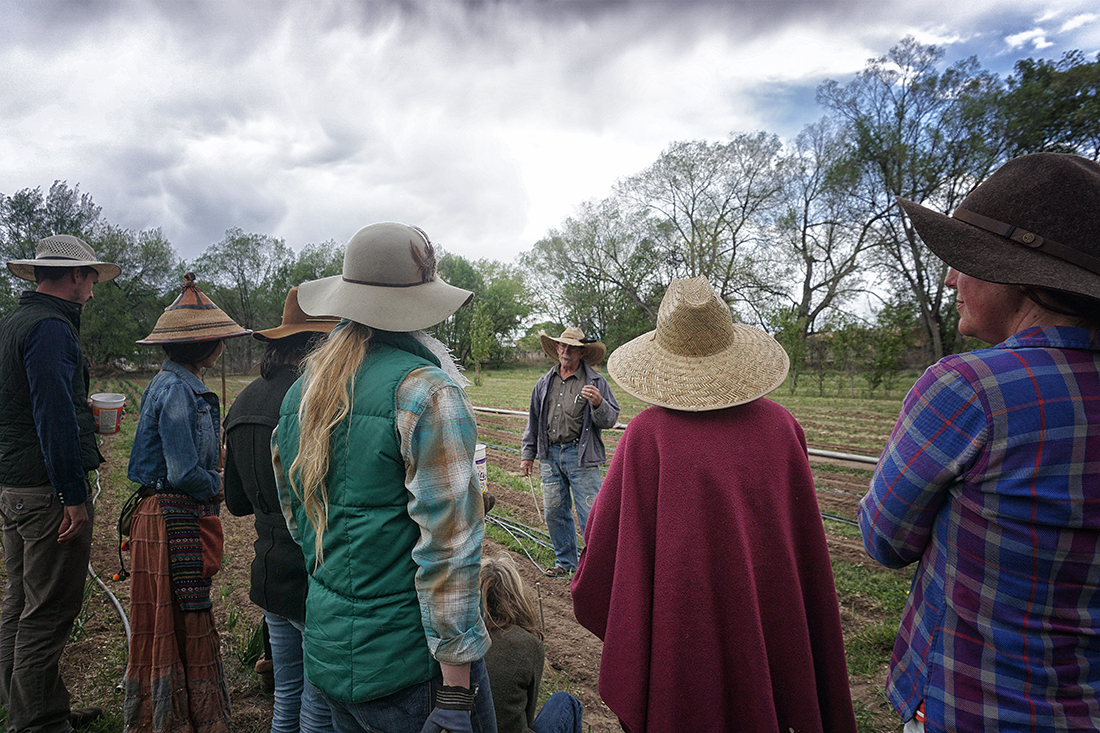 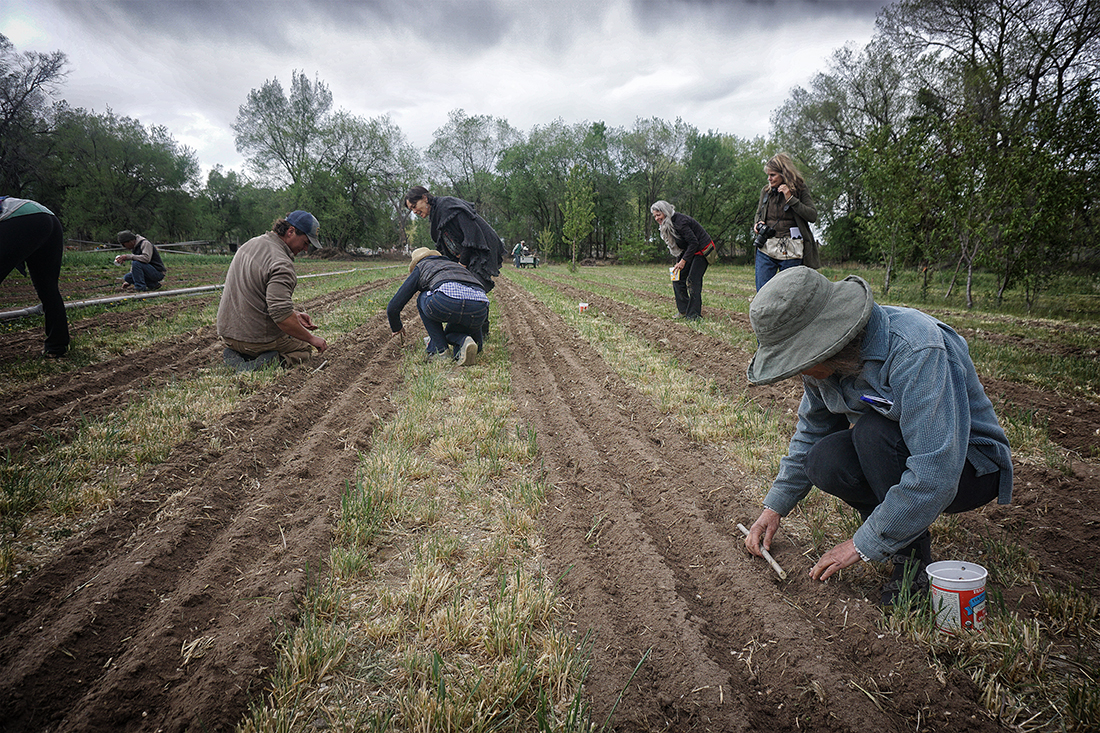 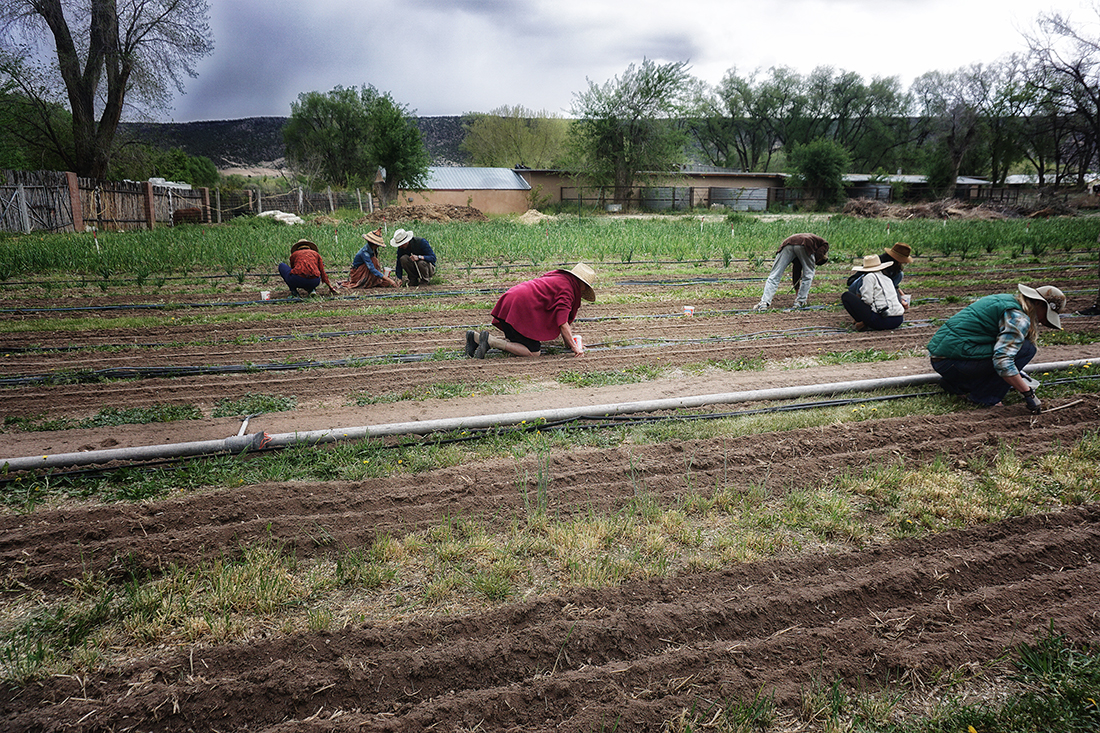 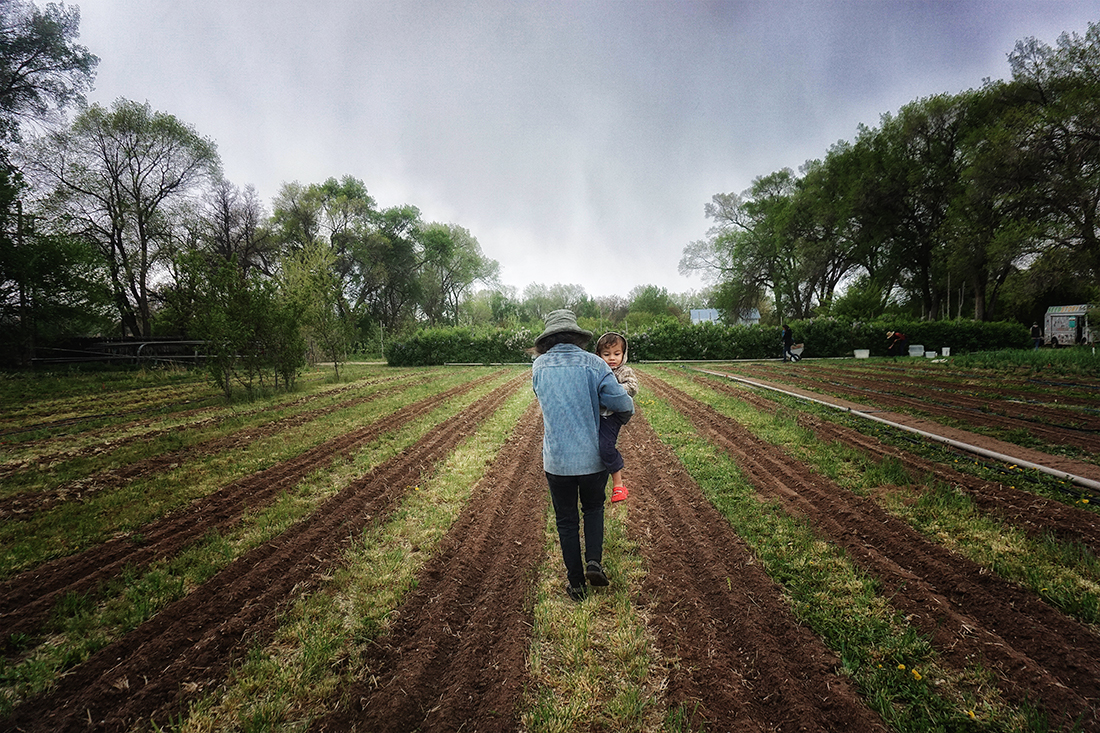 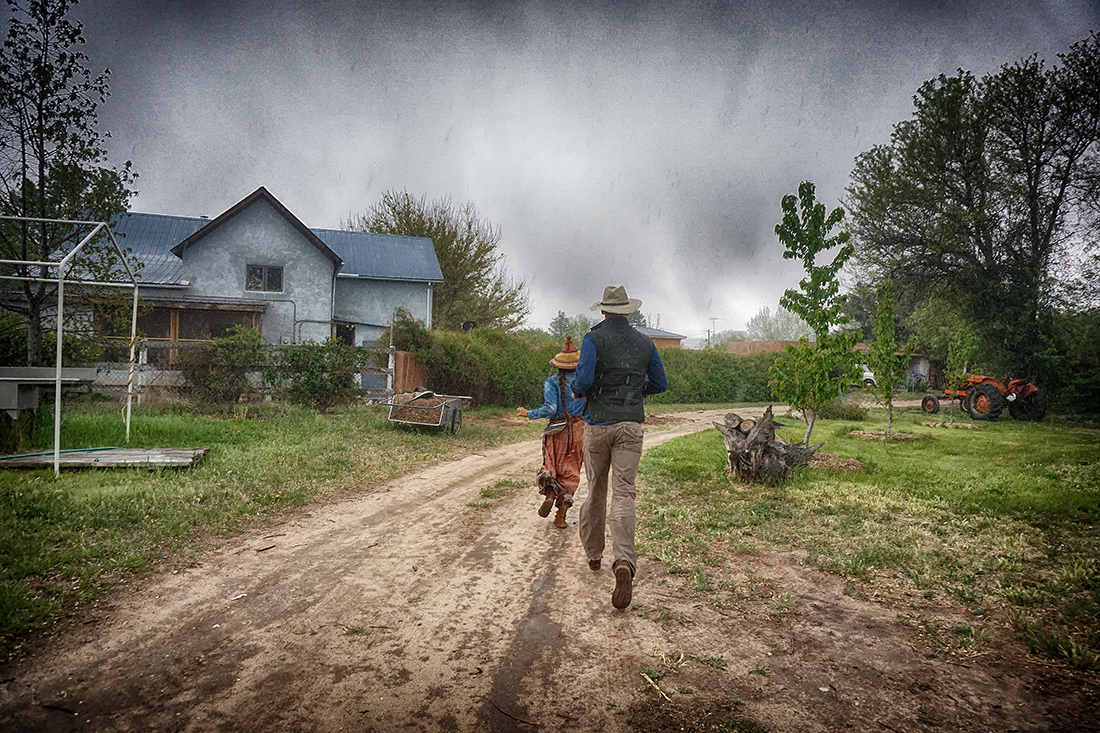 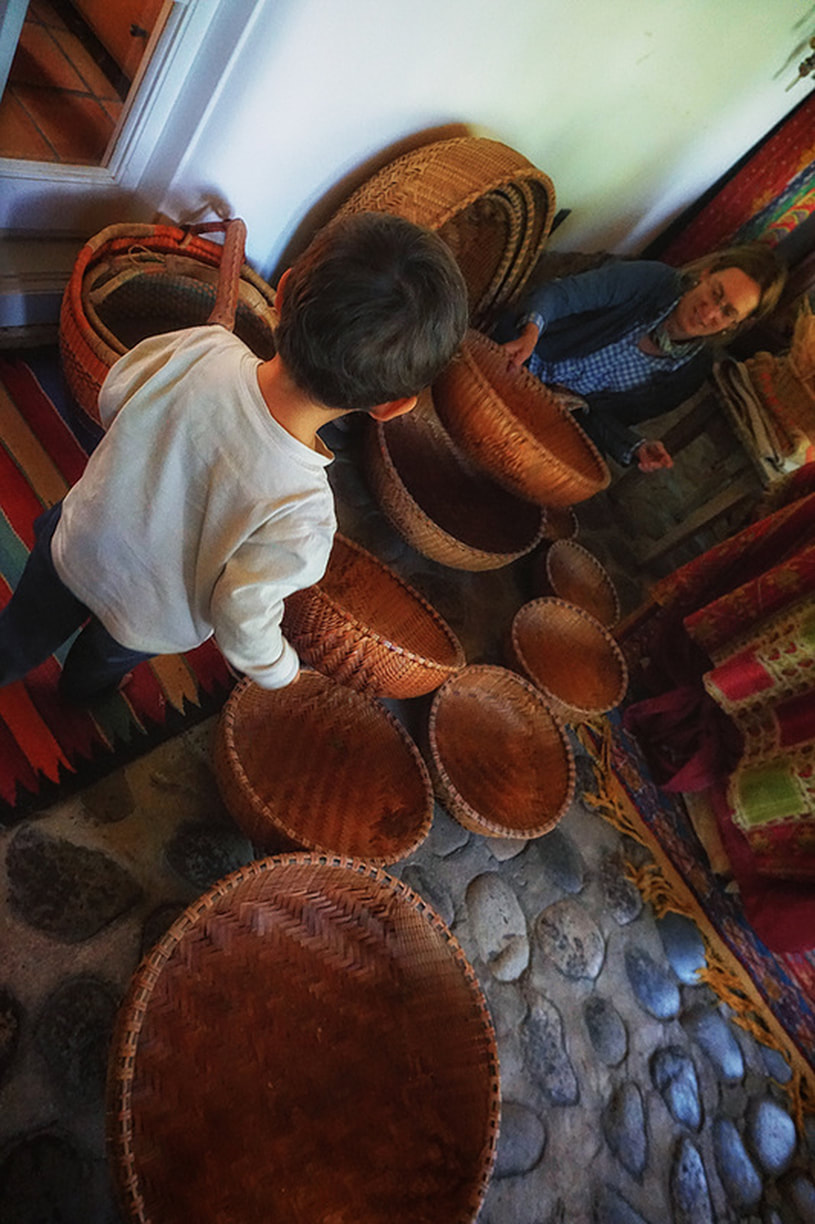 After we said our thanks and goodbyes, we drove along the acequia before catching back up to the highway. I dropped my mom off at her car, and I drove home in the brilliant afternoon light, with my little guy dozing off in the back. A beautiful day. 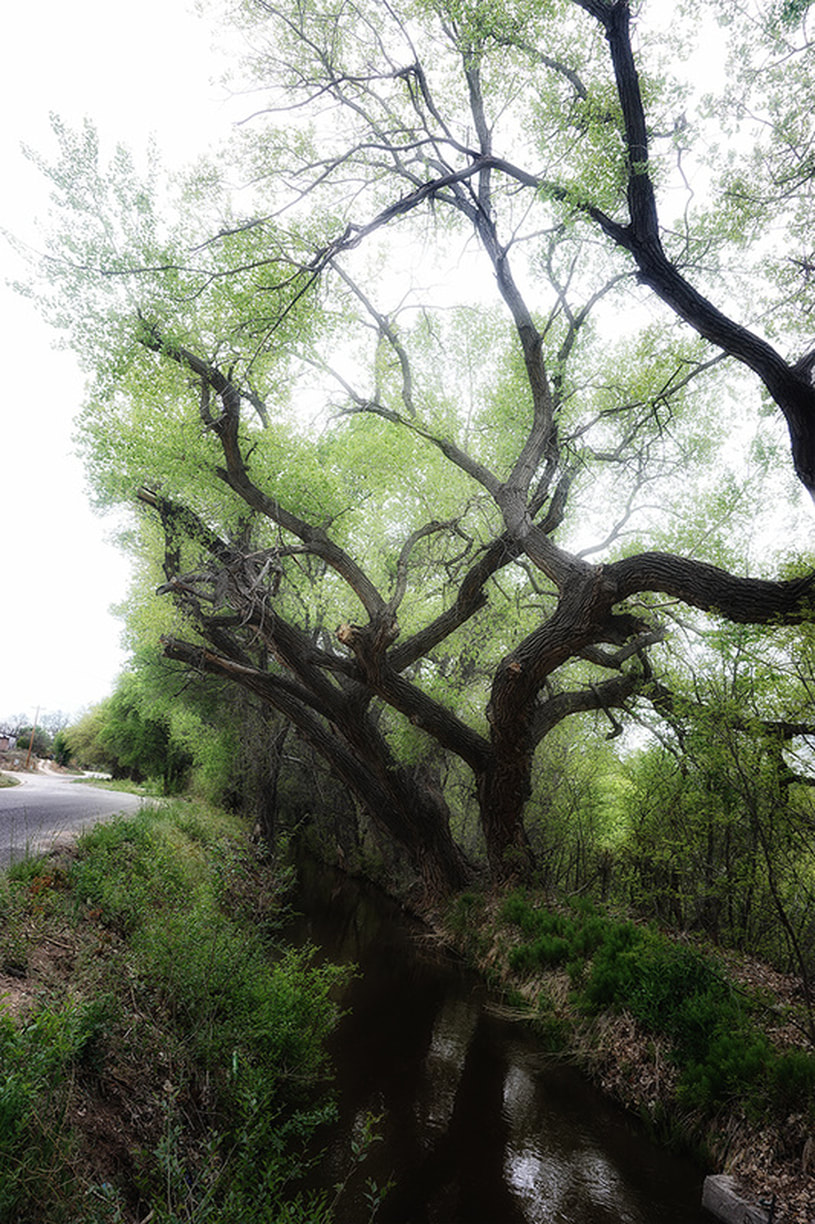