Tiny eggs on stem of dried yarrow
Suleika Jaouad is an inspiration (as is her husband, Jon Batiste – we’ve been listening and dancing to his album We Are, and it is such a fantastic collection of music). I’ve followed her journey for some time, sharing in hardships and triumphs of my own, albeit different, with the knowledge that suffering and bliss are indeed a huge part of the collective human experience. At the beginning of April, she asked those who felt compelled to start a new 100 day project with her. At first, I was adamant that I was going to add to my garden self-portraits, using what I was clearing away from the dried up winter months, or even found objects and recycled packaging, to create something magical. A curled up figure in a nest woven from the cattails and rushes cut from the pond… Headdresses of spring flowers and polystyrene takeout containers… I had no drought of ideas, but the more I planned, the more overwhelmed I became. Then, she sent out a message: the point of the project was to have it nourish us, to not have it so complex that it creates a burden, to not have a set destination in mind. My vision of building a new body of work from the project was decidedly dashed, and I struggled to find a new focus before the start of the project.  I read about one person who was going to plant a seed a day, literally, for the 100 days, and though I’d already planned out my seed planting, and had planted many of them already, I felt inspired. I decided that each day I would make one small improvement to our outdoor spaces surrounding the house. Some days I have accomplished more than I expected, other days less (“appreciating the scent of the blooming irises,” for example, which is not an improvement per se, but acceptable as part of my contingency plan for days when adding anything else seems like too much). I’ve so far completed 21 days in the project.
The first red tulip to bloom this year. My youngest son brought it in to me. "I found a beautiful flower!" He was thrilled. I tried to show my excitement, but temper it with the idea that I'd rather look at the flowers outside, still attached to the plant. (Two images from when the flower was first picked; one days later of the dried petals.)
Today is Earth Day (although EVERY day is Earth Day….) and though I’ve yet to complete my one thing for today, I did work through a nice amount of photo editing that comprise the feeling of spring’s arrival and the ending of late winter – a collection of blooming flowers and snow-covered trees that are emblematic of a New Mexico spring. 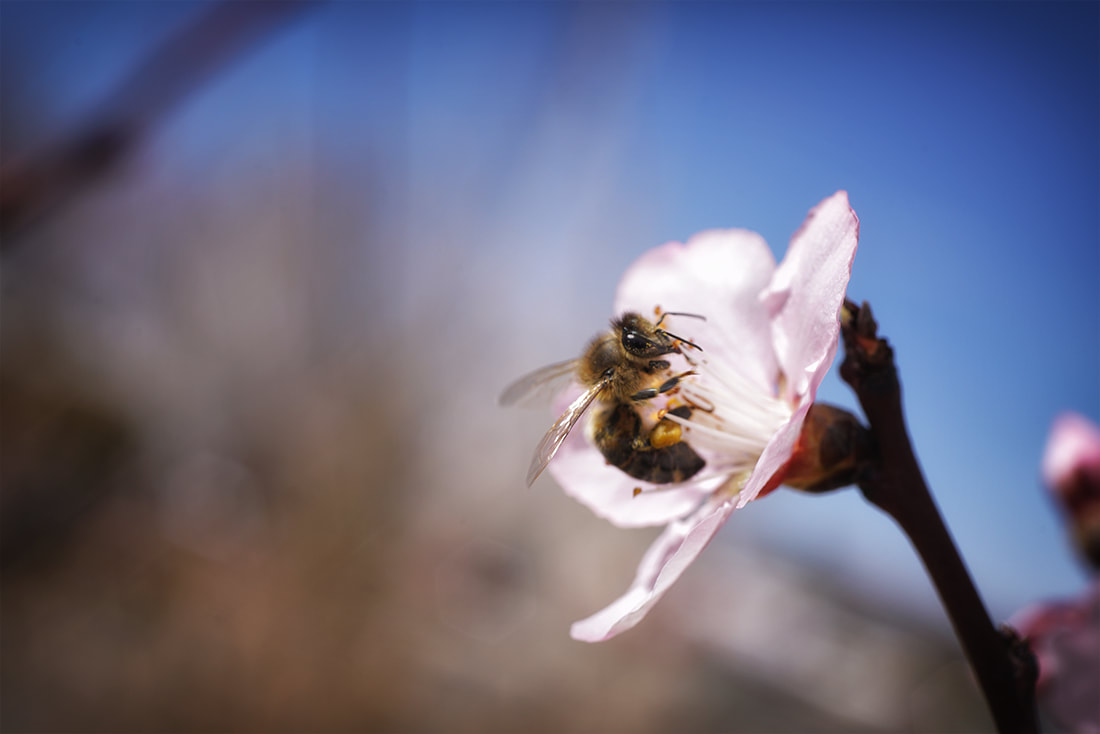 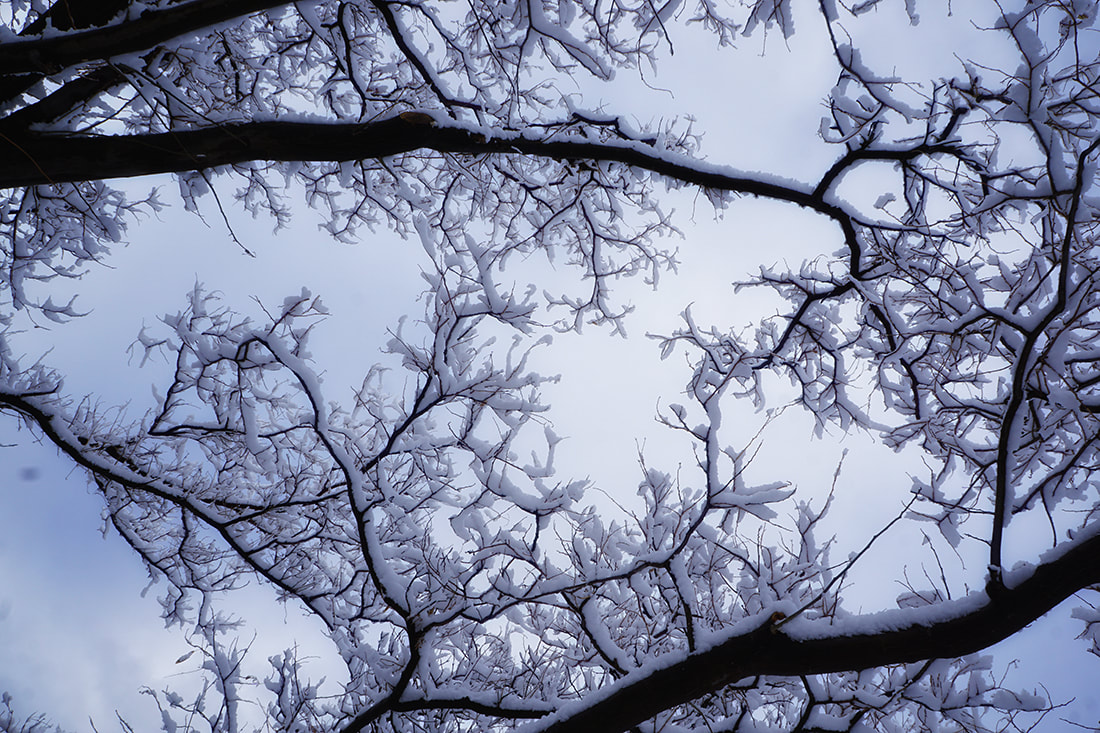 My uncles visited from California at the beginning of the month. It was a visit full of conversation and lots of great food, and made even more magical that the tulips that I planted on my grandmother’s birthday last autumn, in honor of her, bloomed during the weekend that they were here. (If you know of tulip blooms, they don’t last very long. Indeed, they were faded and dropping by the following weekend, so the timing was perfect.) It was like she was saying hello. 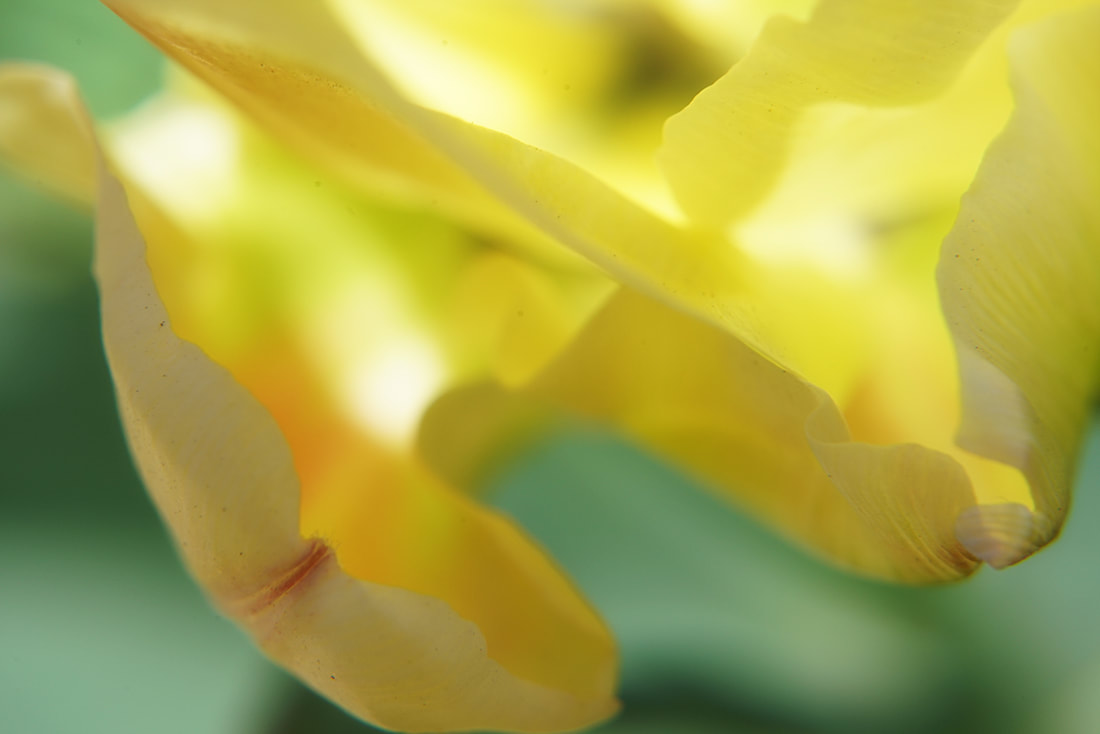 Akebono tulip in bloom in the Grandmother garden
My older son has been hard at work on a variety of projects for school. His science project revolved around plant growth and we had the house full of plant experiments and demonstrations, one of which was a series of boxes filled with trays of pea seeds subjected to different colors of light, or the absence of light. The peas in the dark box stretched out to spectacular, chlorophyll-free heights, but once the experiment was over he left the boxes open and the white shoots leaned far out of the open box, trying to gain the light, and became somewhat more green at the tips. The whole arrangement looked like a windswept wave of pea plants.
I had some of my own plant experiments going on simultaneously, mostly sprouting flowers and vegetables to be transplanted to the outside worlds very soon. We used many plastic containers that would have gone into the recycling (and will, one day, go into recycling) to grow our seeds, and thanks to a National Geographic email, which showed these adorable little plants growing inside eggshells, I tried that as well. My review of the two types of growing containers, reused plastic and eggshell, is that the plastic, with its ease of being cleaned before use, as well as the ability to easily monitor the water levels, is highly superior, if not as aesthetic. The eggshells have been hard to determine how much water is contained within, with some being soggy and others drying out. Plus, some of them developed mold and fungus, and seem to attract gnats more than the others in plastic. In some, the seeds were shaded by the sides of the shell, so they never sprouted. Tomatoes, of the same variety, grown in both types of containers, are about ½ the size in the eggshells compared to the ones grown in the plastic. The eggshell containers were adorable, and I’ll never try to grow plants in them again. I’ve taken to saving them crushed in a jar to use to water my tomatoes with.
The boys dyed some eggs with an old egg dye kit that I found in a cabinet. It was easy. This year was one of the first in many that we didn’t make pysanky, though many people were making them to raise money for, and stand in solidarity with, the Ukraine. I found an Easter bread a week late that I’m going to make this weekend, to share with loved ones, just like people in the besieged country are still doing (and I will be ever grateful for my freedom and acknowledge my privilege to be able to do so). The images coming out of the Ukraine are horrific, yet there have been some stories that are just incredible, highlighting the resilience of the people of the country. Like the elderly woman giving sunflower seeds to the Russian soldiers, telling them to put the seeds in their pockets so that something good can come from their corpses… or the people changing road signs to offensive phrases.
I found some tiny new saplings coming up around the fig, and I marveled at their delicate structure, unable to identify them. I crumpled one of the leaves to see if they were dreaded ‘stink trees’ (also called by the definite misnomer “Tree of Heaven,” the invasive Ailanthus altissima), but the primary leaves had no scent. I was stumped (haha, tree joke for you there). They began to grow larger, and the secondary leaves emerged, upon which I stroked one with my finger and smelled that distinctive stink tree scent, so I pulled them all out, disappointed that I didn’t have half a dozen tiny little trees to gift to someone else. However, I did identify a tree that is truly a gift, brought by a bird perhaps: a hackberry tree, growing near the northern wall, almost as tall as I am now, in its second year of growth. I’ll have to move it to a more favorable location, which is becoming increasingly difficult to find for large trees in our yard, as we are running out of space for them. I’m considering placing it in amongst the blackberry canes, as they currently look similar in structure, and then it would allow us to pick the drupes when they ripen from the upper level of the vine fort (and also prune it to a more manageable size).

About a week ago, a rock squirrel came back to our yard. Whether it is the same one that raised some pups last summer, or one of the pups, or a different one altogether, I’m not sure. I do know that our neighbor to the south will be thrilled (insert sarcasm here). The squirrel had taken to eating his marijuana plants last summer, and he was not happy. I’m pretty sure the same squirrel had snuck into our garage over the winter and eaten some of my tubes of oil paint… WTH, squirrel? There were bite marks and little black paw prints all over the workbench. That must be some crazy squirrel. Not right in the head. Nutty. Anyhow, I was working inside and I heard this incredible sound coming from the backyard. I thought it was some kind of bird call, and so I went out to see if I could identify the source. It sounded like it was coming from the neighbor’s large mulberry tree, so I went closer to the wall and listened. I could tell I was getting closer to the source, but I couldn’t see any bird. Just past the little meditation house, I saw the dusty calico cat that has been visiting lately, perched on the wall, looking down with a puzzled look that mirrored how I was feeling at that moment. From the direction the cat was looking, I realized that the sound was coming from near or under the meditation house, and thinking it was a wounded bird, I scared the cat off. I looked around for the bird, but couldn’t find it, and the sound stopped once I stepped into the small house, my feet noisy on the pallet wood floor. After a while, I went back inside, still curious, but at an impasse. I remembered I’d seen the squirrel sitting up on top of the meditation house just a few days ago, and was wondering how a mate would find her in the middle of the city. Then I thought that the high-pitched sound might be a call, a kind of horny shrieking. Come over here and find me! I went to look up squirrel calls, and found out that they do use alarm calls (and this did indeed sound like nature’s version of a car alarm), however, during mating season, some species of squirrel males will sound out the ‘alarm’ call after being the first to mate with a female. Squirrels of both sexes are very promiscuous, so the male will ‘protect’ the female after mating for a while, sending out this alarm to keep other squirrels away to try to ensure that it is he who sires the babies. I can’t say for sure that rock squirrels exhibit this type of behavior, but it was an interesting impromptu lesson in squirrel reproduction.

(Today's title is inspired by one of my favorite artists: Aria Fawn) 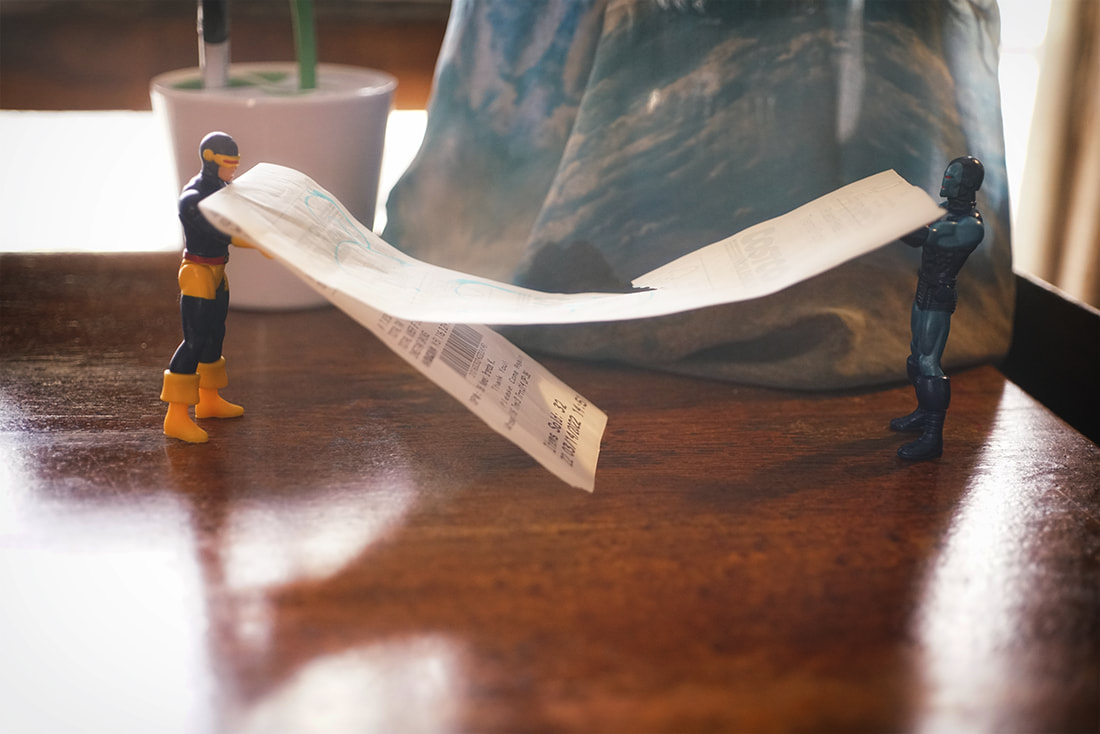