On the Road with Migratory Birds and Children... 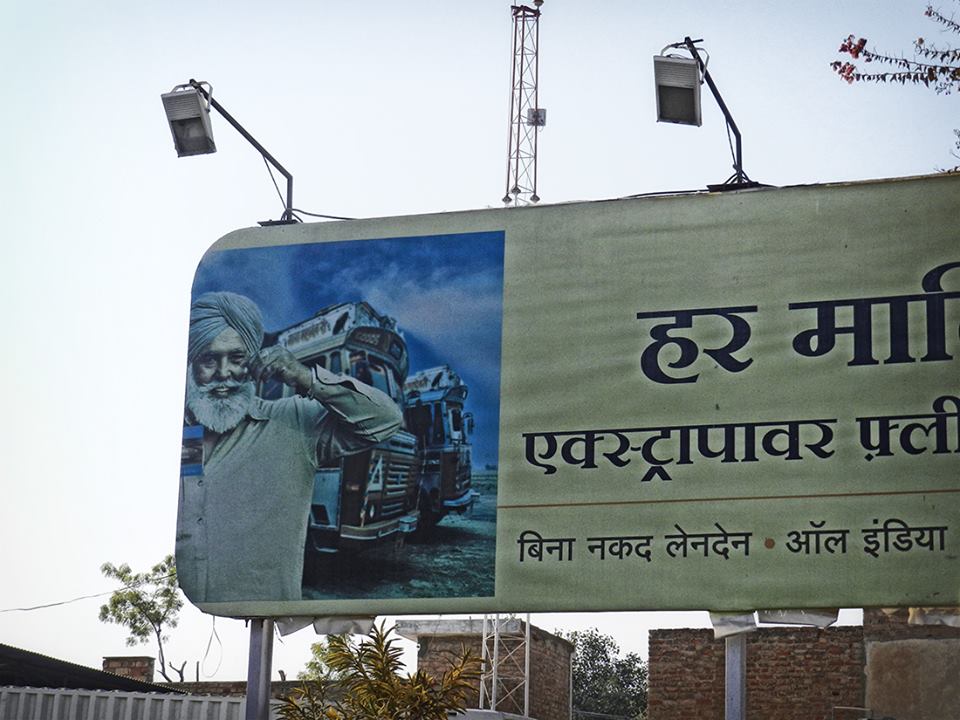 January 9th
We left Bikaner this morning. We were up early and got all our things together. We went down to check on the internet, but it still wasn’t working. We were down to meet Hukam a bit before 10 (he had teased us the night before about being late that morning – but in all fairness, I asked him when he wanted to meet, and he didn’t set a time with us – so for this morning, he said we would meet at 9:45 – which means we meet at 10, he said, and laughed). This morning, he was late. I guess it all works out. As we waited in the car, an old beggar woman made her rounds in the parking lot. I saw the couple in the car next to us give her money. I didn’t have any small bills, so I ignored her. She tapped at the window for quite a while before leaving.
Soon, Hukam came back, we stopped for gas, and headed out for Jaisalmer. 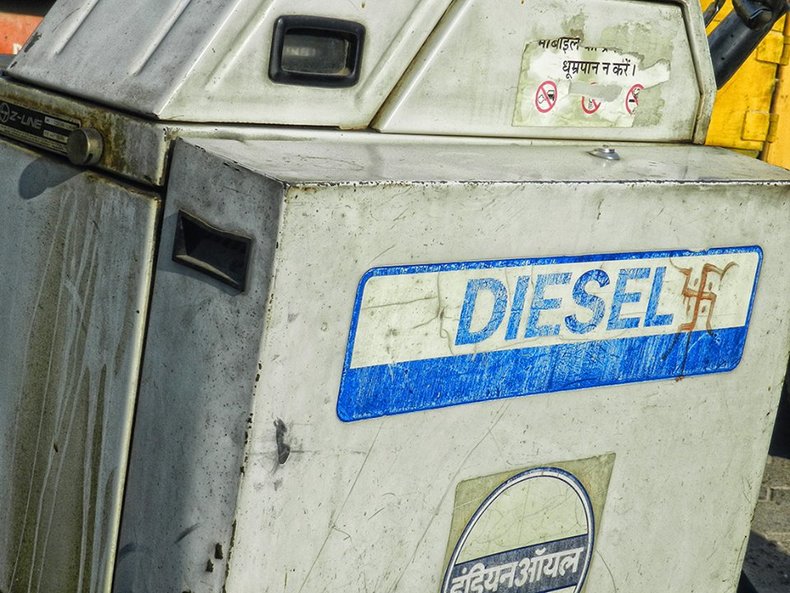 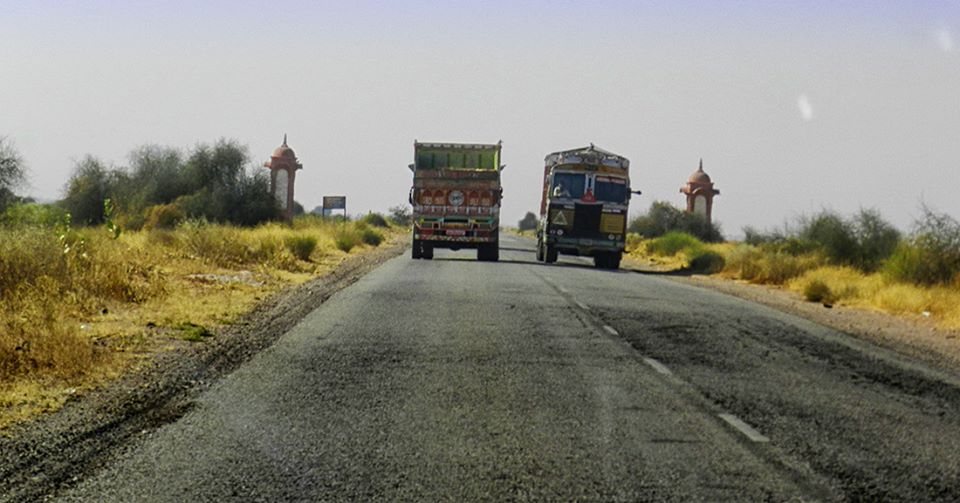 We drove for quite a while – some of the same road stuff – lots of cows – many decorated busses – I still have yet to get good, close-up photos of either – 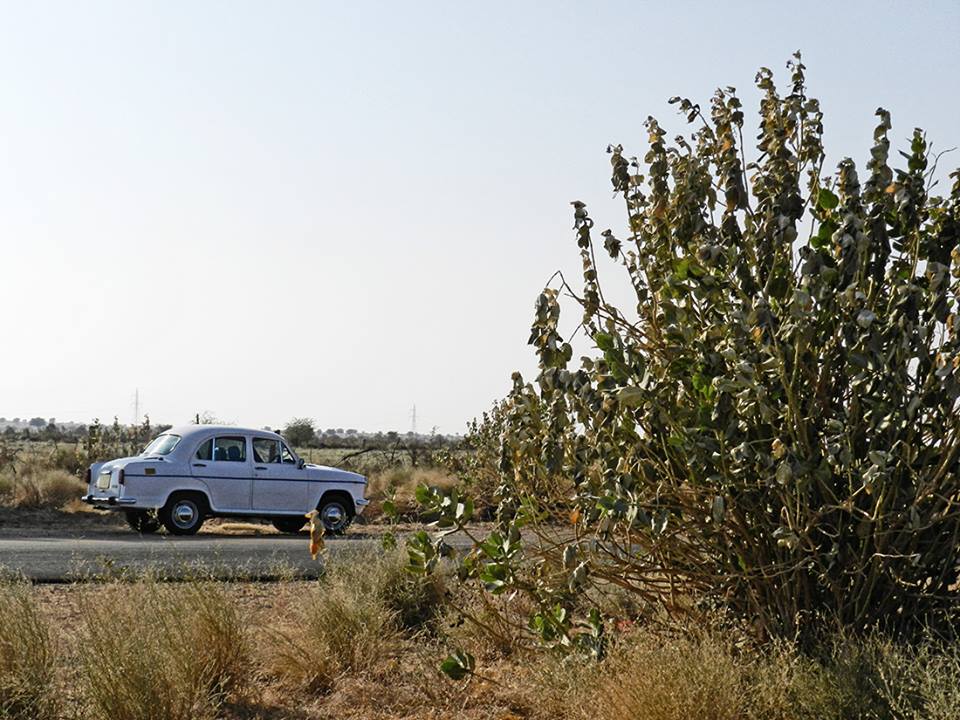 We started seeing different types of trees – these large, broad-leaf types, well, the leaves are large – the trees are rather small. Some fuzzy type tree, some Serengeti-type trees. Really cool. We passed some mines – for cement, Hukam said, and some tall smoke stacks where they make bricks.
We saw two trucks that had smashed into each other. People had taken bits of the broken-off pieces and placed them around the trucks – I guess to keep people from driving close by. It seems that if a vehicle is broken down on the road, objects are placed in the road around it, so people will avoid that area – I’ve seen rocks, dirt clods, branches all placed in the lanes. One place where they were repainting stripes on a speed bump, they had put rocks up across that lane. 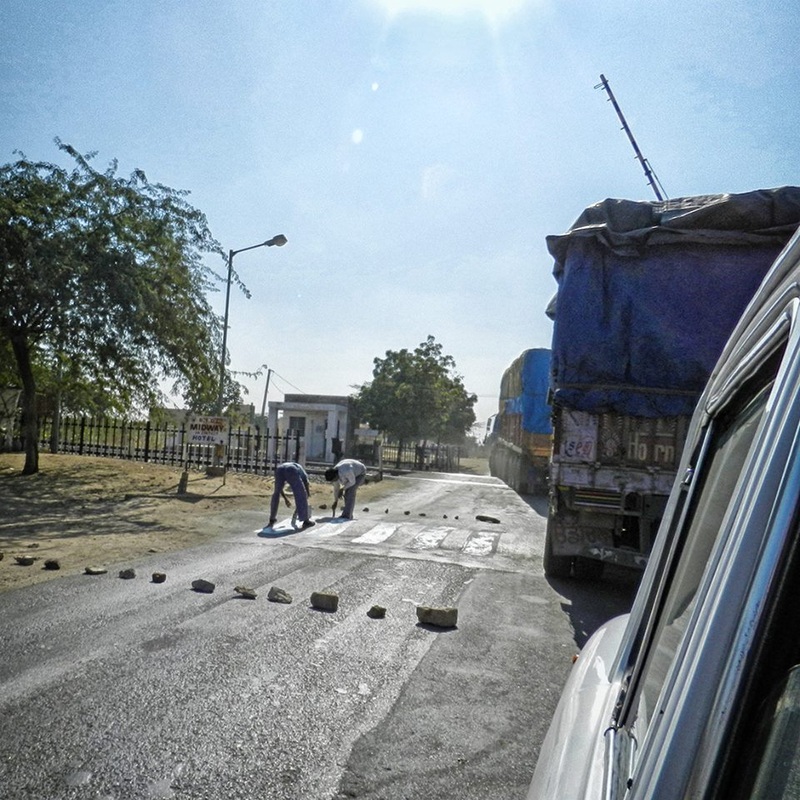 After 2, we headed down a road, and turned off. Hukam said we were headed to a secret place – but I thought he said a cigarette place, and thought he needed another smoke break. We got out of the car. A woman with a pot on her head was standing nearby. I asked to take her photo, and she said yes, so I did, then she asked for money. I gave her some, and asked for one more photo. She posed for another one, smiling happily under her veil, her rupees that I gave her clutched in her hand. 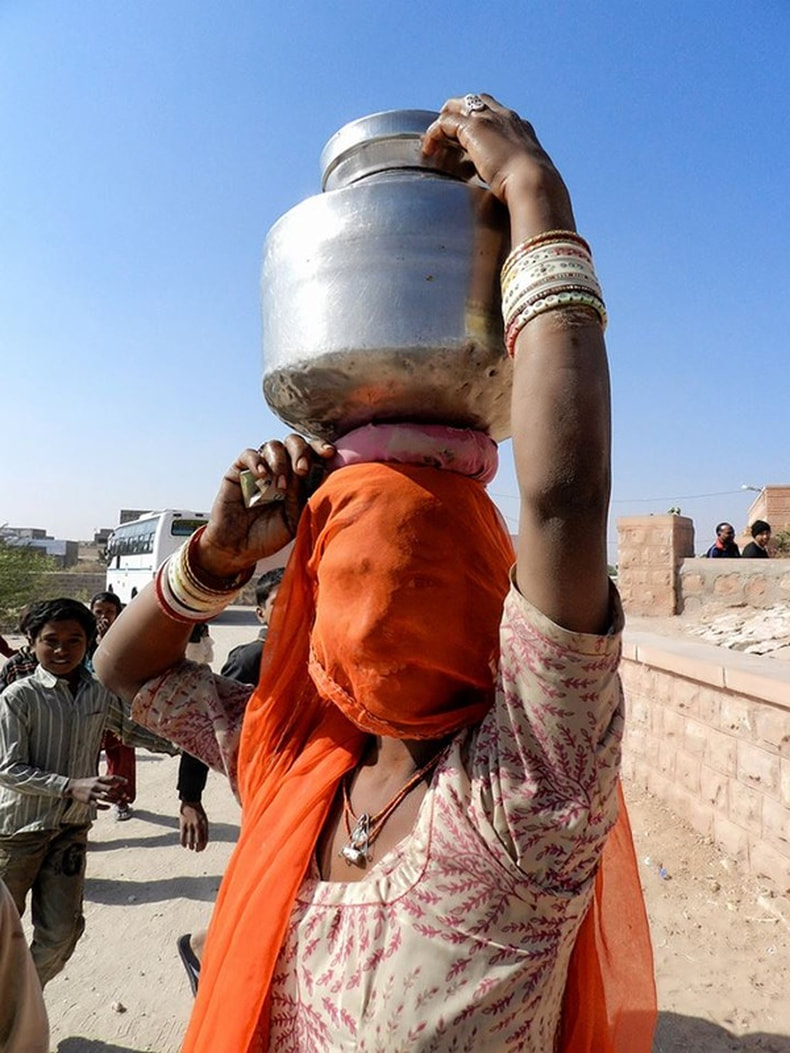 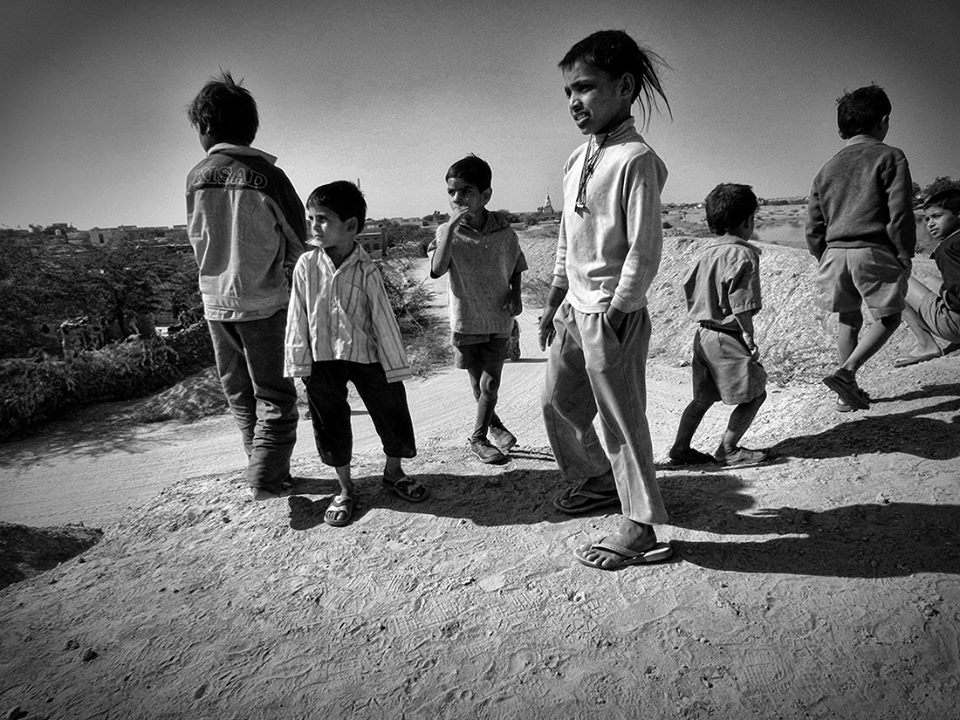 Around a dozen or so beggar kids surrounded us, and started walking with us. “Cho-co-lette, choco-lette” they kept saying. Some would say hello, and I would say hello back, and they’d ask for chocolate or money, or something else I couldn’t quite figure out. They would see my camera and say, “Hello. Photo.” But I still didn’t have small bills – and it’s best not to give money to the kids.
I got some sneaky shots of the kids as they walked with us. I would hold the camera down at my side, and aim it over towards them. They didn’t seem to realize I was taking pictures. If I put the camera up to my face or out in front of me, though, they would start asking for money and saying “Photo. Photo.”
We walked over to a small body of water where hundreds of cranes were staying for about 6 weeks in the winter. They were in from Siberia. It was beautiful. 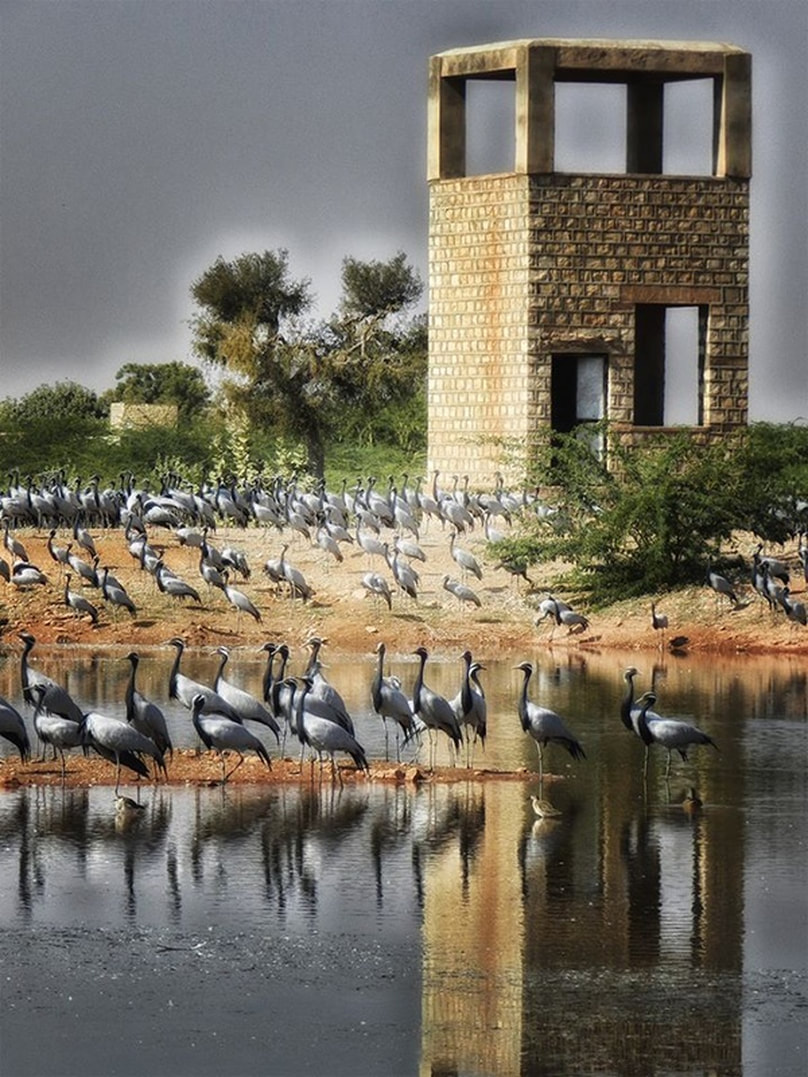 We walked around a bit, with the kids in tow – at least they weren’t touching us, or grabbing us. When we made our way to leave, I got out one of the tic-tac containers to give to the kids. Hukam told me to let him do it, and he distributed one or a few tic-tacs to each kid, who clustered around him, squealing and holding out their hands. Then you just heard crunching as the tic-tacs were consumed. Even Hukam had a couple. We walked back to the car through part of the village. I saw some kids at a school and a baby being bathed on a front deck. Some local boys tried to strike up a conversation. “What country?” “What’s your name?” Etc. They were all smiles.
In this area, much more stone was used in building – I saw many stone fences. 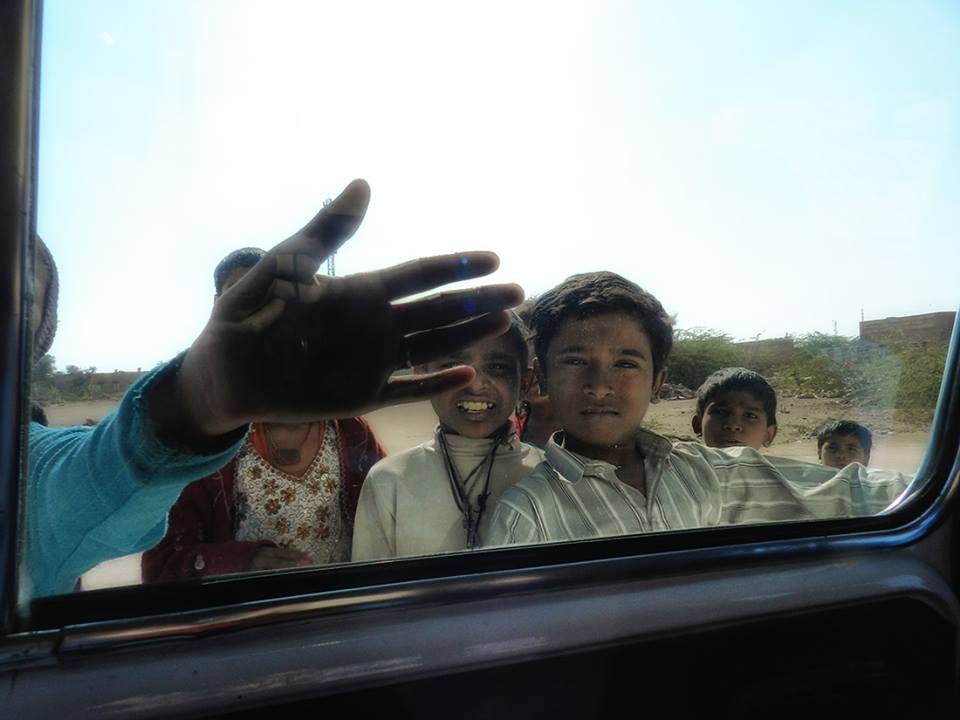 All the kids gathered around the car as we were leaving – all still begging for things. I tried to take a picture of all of them at the window. A little girl put her hand out to block the camera, paparazzi blocking style. No money, no photo. She left a dusty hand print on the window. We headed out, and stopped for lunch a bit later. I was strong and only bought 40 rupees worth of postcards from the gift shop. They were well worth it, though. I am going to try to only buy little things – inexpensive items – from now on. We went on towards Jaisalmer – very close to the Pakistan border, so there was much military activity around us – many Army encampments.
Mosquito count 8 ; 13 ; >50
We reached Jaisalmer – the golden city, thus named for the huge amount of gold sandstone carved to use in many of the buildings here. There is a huge fort made of the stuff, with people still living in it nowadays. We checked in to the hotel, then went to Sunset Point. We got a mosquito coil put in our room – actually, they brought a plug in repellant, and sprayed the room. (I don’t see any more in here right now.) We were going to use the internet, but the tiny room the computer was in had around 3 dozen mosquitos flying around. 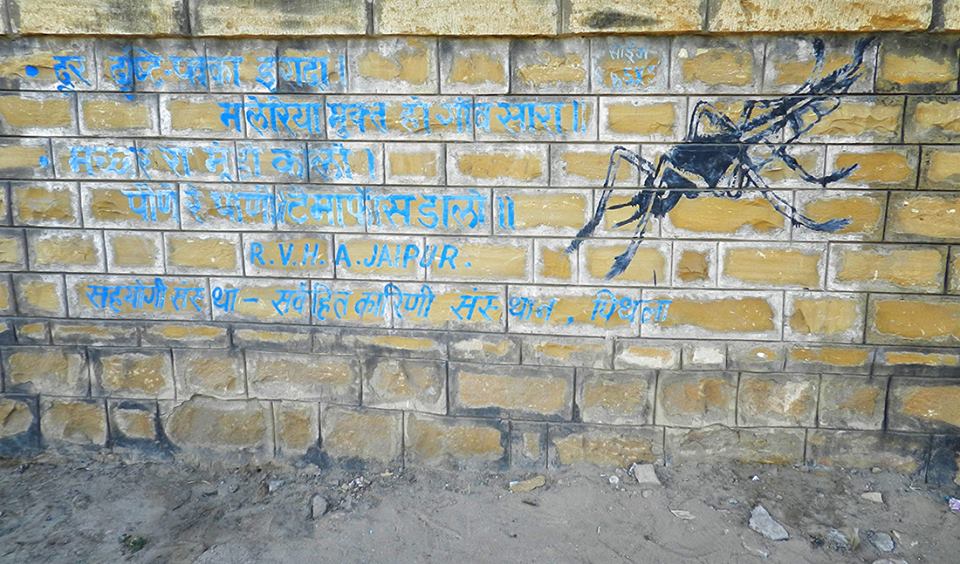 When we got back from Sunset Point, we were invited to have dinner with two ladies also on the same tour, so we headed out to meet them. The skeeters seemed to be gone. We went to a restaurant near the fort and ate up top – it was partially enclosed, and they had a fire burning. The food was good, and we had a nice time talking with the ladies. The city at night was beautiful. The fort is all lit up.
When we got back, the internet room looked safe, so I got on to check a few things. 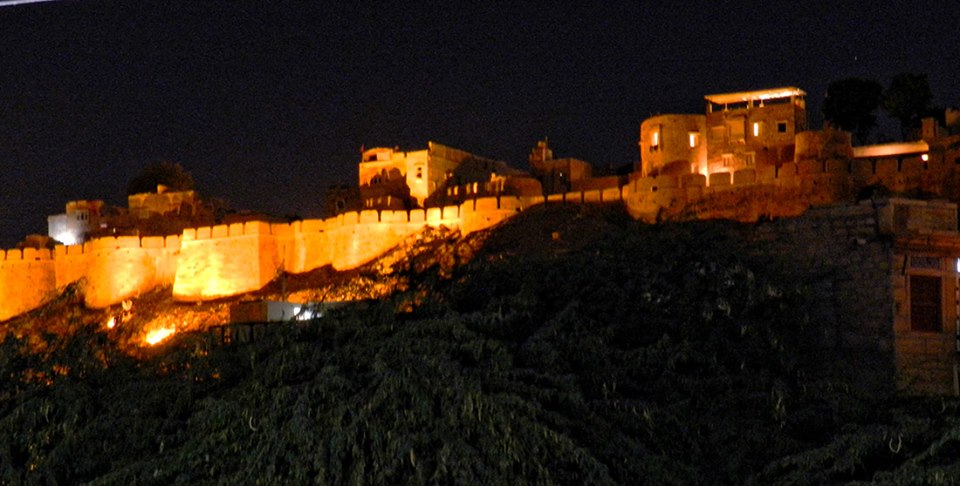 The drive here today was long, but we saw some interesting things. 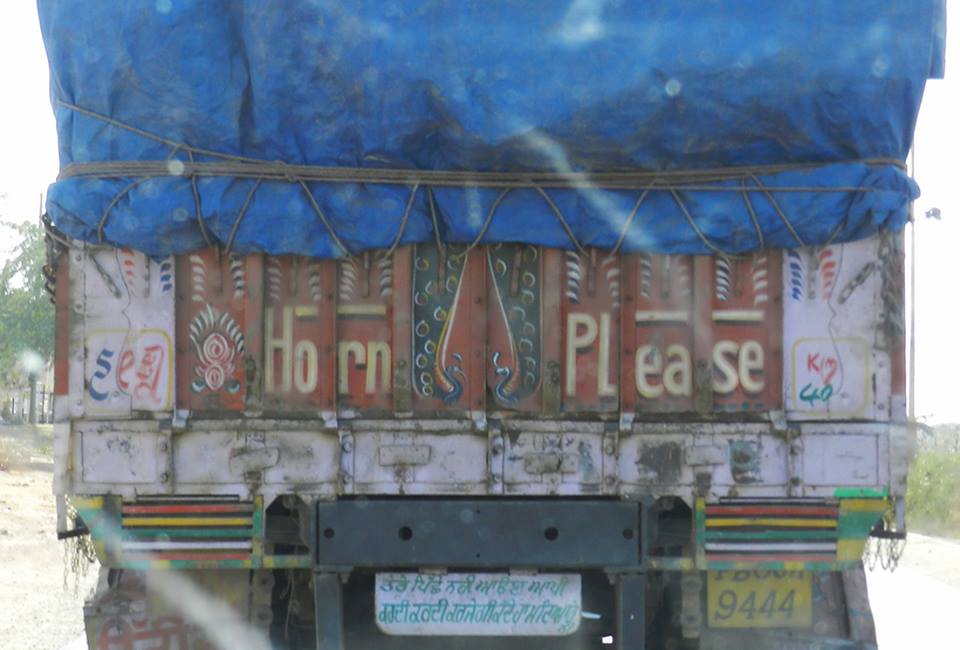 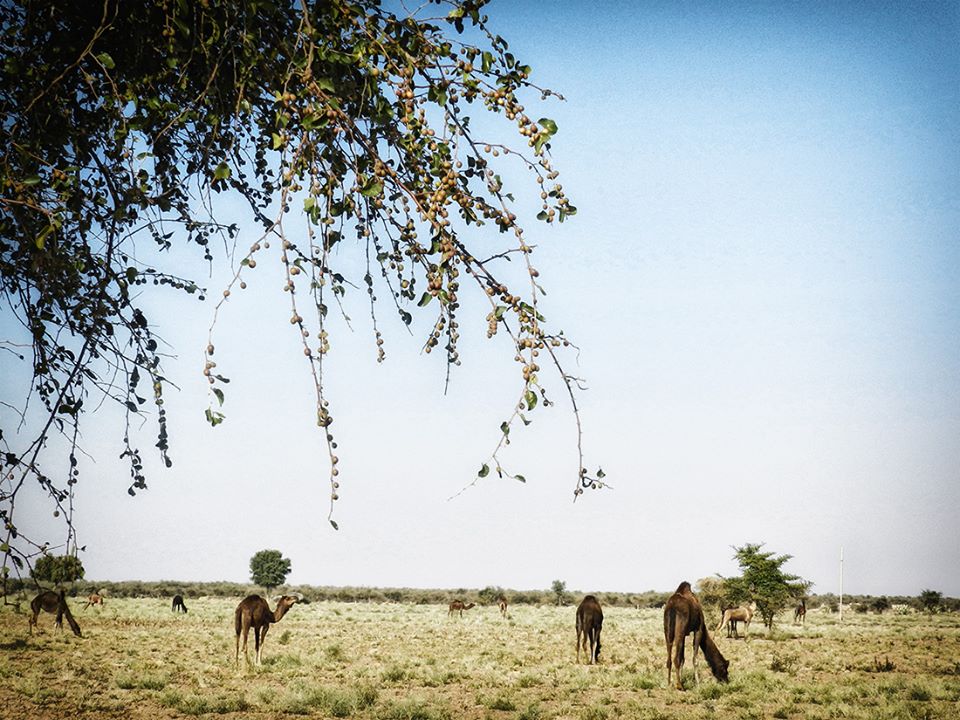 A field of camels, for instance. (The plant/bush in the foreground is henna.) I saw lots of crop fields – some strange looking plants with fuzzy looking seed pods on top. We passed many houses – many made of brick or stone, but some built of grass. Many women were out working the fields in their brightly colored saris – chopping wood, carrying huge amounts on their heads. We passed a section where pilgrimagers drop their shoes on the way to the temple – hundreds of shoes all along the road. We also saw some Jain people on a pilgrimage – many in all white suits walking on the road.