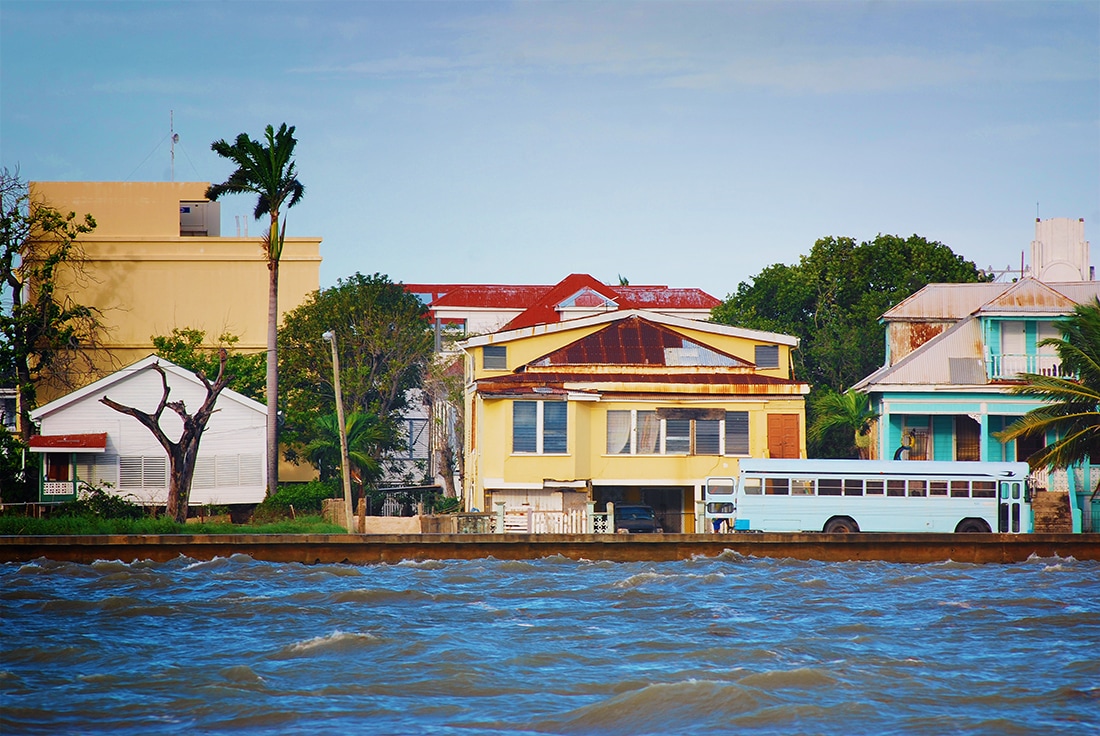 We’d had an extra hour in the morning, which was nice, as we had to be up and out at the tender at 7am. I got up early and went up to get some breakfast things to bring back to the room for us all to eat. Little dude was not happy to be up so early, but it was a beautiful morning. We’d tendered off the coast, about 6 miles out, at the only natural break in the coral reef. We rode in large pontoon boats to the dock. There were lots of sea birds in the water, fishing around us, and a small rainbow in the sky. Welcome to Belize!

On the dock, we met one of our tour guides for the day and he took us to our bus. We got on the bus with the exuberant Lion brothers – excellent guides, but a little to hyper for that early in the morning. One of them had a speech pattern that reminded me of Cheech Marin, and his favorite saying was “It’s un-Belize-able!” which was funny for the first ten times or so. We were also instructed to roar like lions in order to keep our group intact out and about off the bus, so we got to practice our roaring a bit, too. The brothers gave us a whole bunch of facts and history about their country on our hour-long bus ride to the stopping point: where the highway meets the New River. We passed by junk-filled yards, school grounds filled with kids, and large, open fields of low jungle overgrowth. We learned that anyone can squat in Belize – you improve your plot of land, up to 1 acre, for five years, and then you can petition the government for ownership. The brothers were very enthusiastic about this tour guide job. Their other job was working in the sugar cane fields, harvesting and burning in 100+ degree weather. “We love this job!” they said, but went on to say that when the tourists stop coming, when it gets too hot, then they have to go work at their other job. 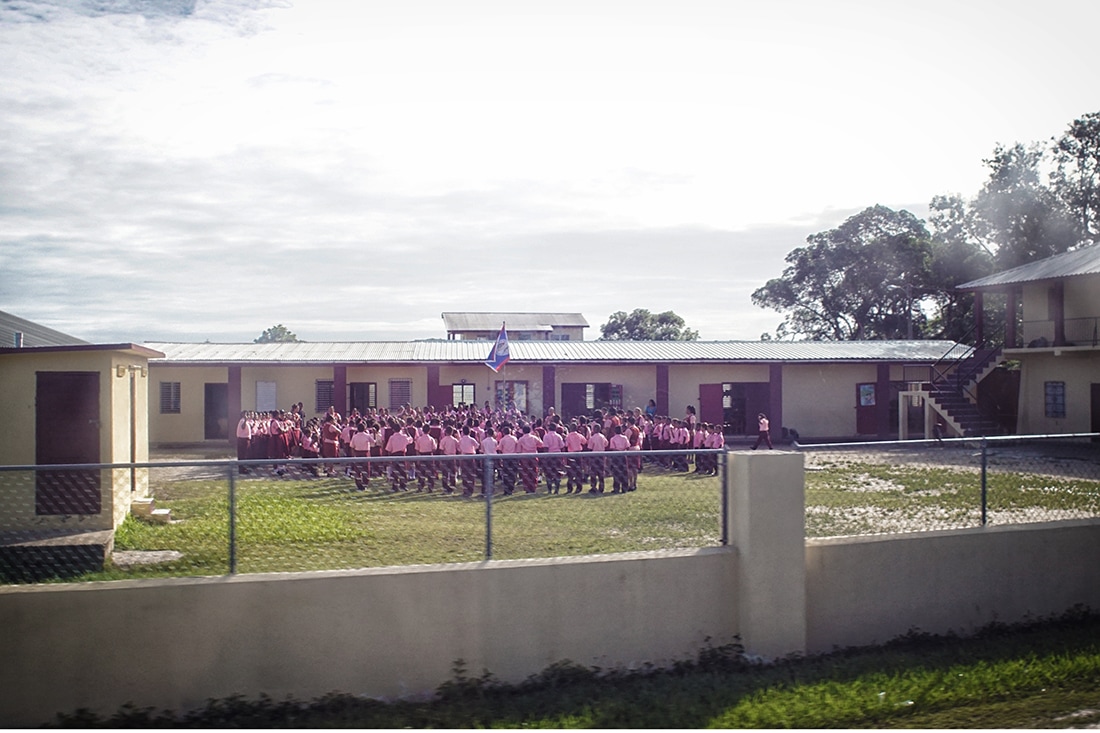 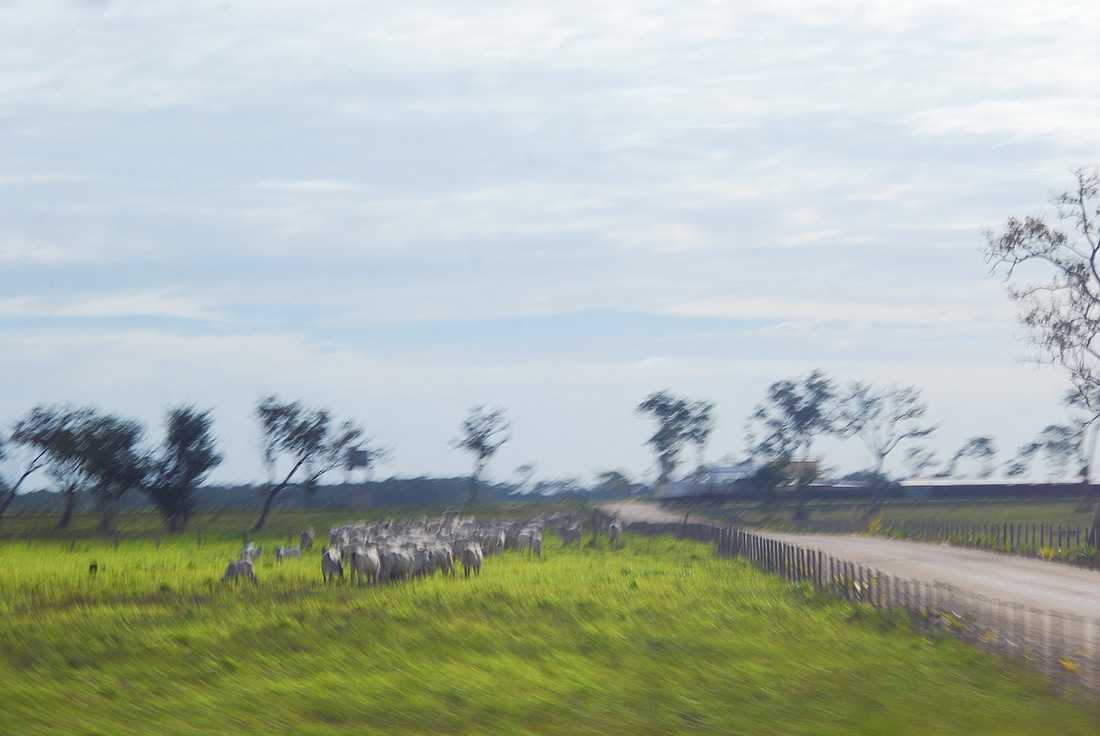 We got off the bus at the junction of the highway and the New River. There was a hotel of sorts there, with a bar/restaurant, and a dock at a pond where the river boat was to pick us up for our river safari up to the Lamani Mayan ruins, about an hour up the river. We waited in the shade of the thatched roof porch and I tried some cashew wine. It tasted like prune juice, and I didn’t like the way it emphasized my feel of non-stop rocking motion, even on land, so didn’t finish it. We all got on board the fairly big, covered motor boat for the second leg of our journey.

The New River was beautiful. I couldn’t help but feel bad for the amount of noise that the boat made (and pollution), and the wake from the powerful motor would wash up onto the surrounding vegetation. A big dark band was formed where it hit. It didn’t look healthy, exactly, and I imagined that soon all the trees close to the edges of the river would fall in, but there were endless rows of new trees behind them, just waiting to take their place. We didn’t see much wildlife – no surprise there, anything living in the area would hear us coming a mile away. We did stop and see a small Nighthawk asleep on an overhanging branch, “for all you bird lovers,” and “for all you snake lovers” we saw some huge yellow air plants that did indeed look like snakes twining around the branches of the trees. We saw termite nests in the trees, and a dead egret, its white body draped gracefully over the branch of a tree. We stopped to see some camouflaged bats on the trunk of a tree – little brown star shapes blending in nicely with the bark. We got quite a history on the medicinal value of the local flora, which I found very interesting. Along the river were large tracts of land that were Mennonite communities, their horses would wade in the river among the lilies. In my exuberance for getting close-up photos, I was whipping the camera with the long lens around, trying to capture the birds and details in split-second opportunities. Between that and the bouncing motion of the boat, not many of them turned out even remotely sharp.

We got off the boat in a wider lagoon of the river, with grasses growing deep along the sides. Then we proceeded to walk up the stone pathways, and then the unpaved, dirt pathways into the ruins. We first visited the Mask Temple, and while the masks on the sides of the temple structure were beautiful and of impressive size, I was disappointed to learn that they were replicas, albeit of the real things which were positioned behind the replicas. We learned even more about the “natural pharmacy” of the jungle, and walked to the large, multi-generational pyramid in the area. We got to climb to the top, though not up the steps up the face of the structure (too much wear on the old stones, and they had become slippery from rains and mud and mosses growing on them); instead we made our way up a steep wooden set of stairs around the back of the pyramid, then entered onto the stone at the second to highest level. From there, we could climb up the steps to the top and take in the view of the surrounding jungle. The kid decided that he absolutely couldn’t walk anywhere for the whole trip this day, except for climbing up and down the steps at the very top of the pyramid. We made jokes to our guides about carrying him up and not having a human sacrifice, which they did not laugh at. Other climbers were giving Mike high-fives for carrying the kid all the way up there, and it was definitely no easy feat. I was huffing and puffing just lugging myself, the snack bag and my cameras, let alone 30 extra pounds. After some shots of the surrounding scenery and a brief break we started back down.

We made it up and down safely, then continued on through the ruins into the ball court area and then the Jaguar Temple. Mike swung like a monkey on the thick vines hanging down from the canopy, and we heard howler monkeys off in the distance and caught a glimpse of a couple spider monkeys hanging around in the trees. In the entry part of the ruins there were a few small buildings that housed the ‘gift shops’ for Lamani. I went into one and talked with the woman there, who was running it that day with her mother. She really liked my son, and said he reminded her of her own son, who had just turned 2 the day before. She showed me a picture of him on her phone, and they did look similar, especially the hair. One of her friends came up while we were talking and he saw my son from the back and thought it was her son, too. They gave him a little wooden turtle toy, and I bought a beautiful woven table runner (I had to ask what it was for – a belt? a scarf?). All of the items for sale in the shop were made by a women’s collective, from Central American refugees, so I felt good about supporting the cause. Mike got us t-shirts from one of the other shops, too. 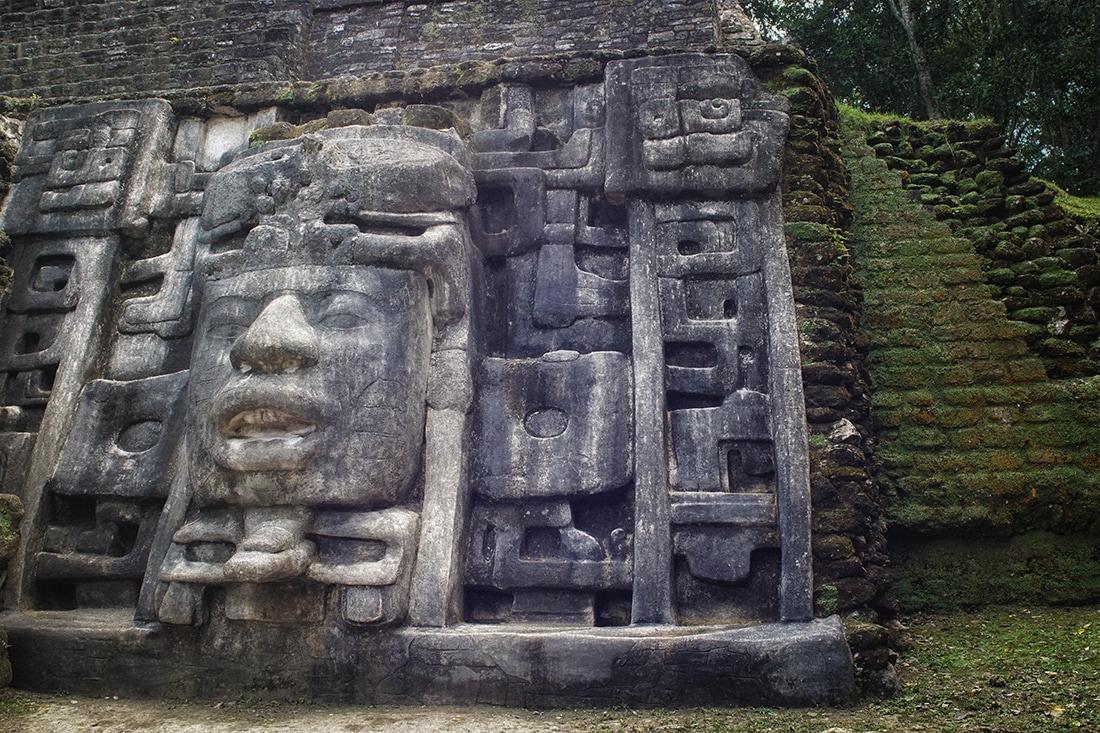 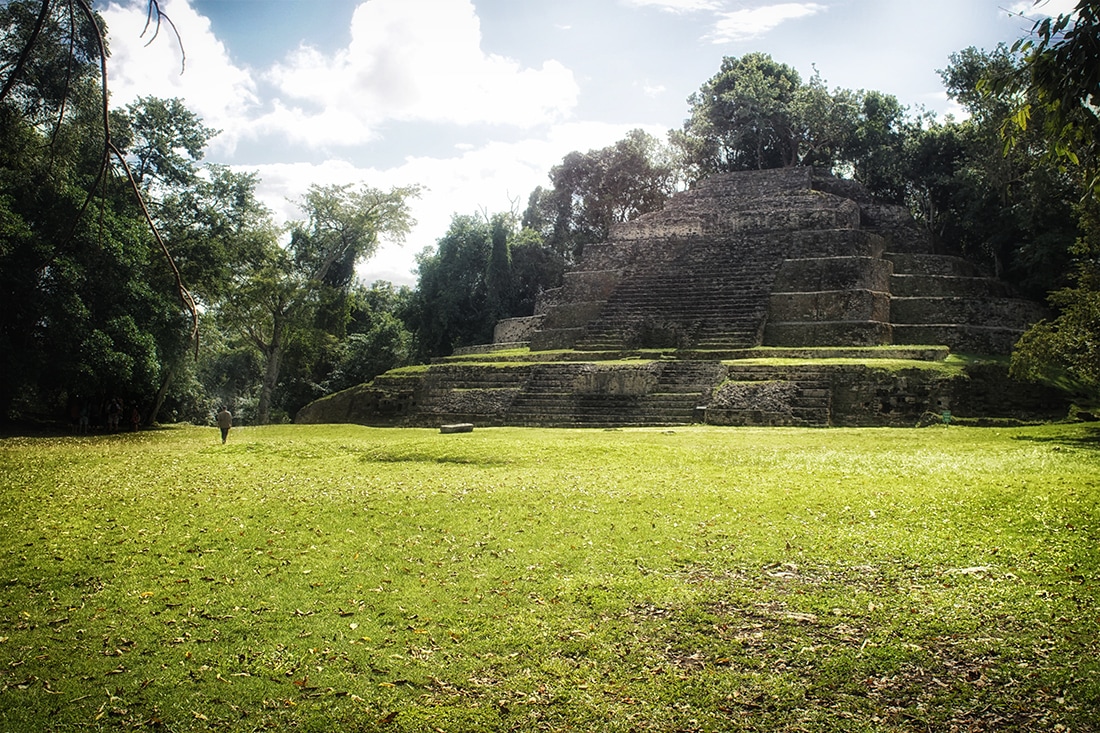 We were late in getting back to the river boat – the last ones to get back on. We were walking on the wooden walkway out to the boat, behind a couple that was rather slow moving. “Are you with the Lions group?” I asked them, and when they said no, I asked if we could hurry on past them, so they let us. We climbed into the last seat in the back of the boat. I was a bit disappointed, as the vantage was not really great for photos, and Mike kept getting splashed by the wake when we turned left, but it turned out to be a fortunate seating arrangement as it started raining on the way back and everyone in the front of the boat was getting pelted with rain, but we were almost completely sheltered all the way in the back.

We got back to the restaurant and had a buffet style lunch – beans, rice, and chicken. Not four-legged chicken, as the Lions call iguana, but regular two-legged chicken. They also had salsas of varying hotness, and some sweet bread for dessert. Afterwards, we got back on the bus and most of the passengers took a nap. The Lion brothers sat up front, talking quietly with each other and looking worn out. We got back into town just in time for the last tender back to the ship. 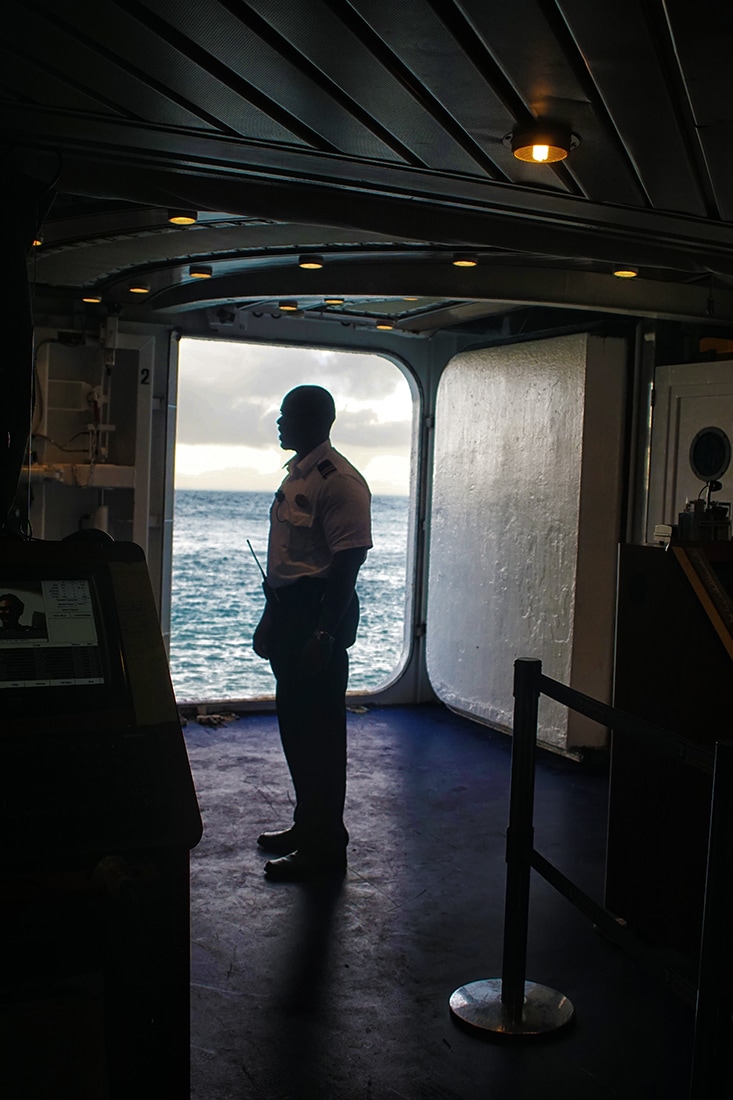