Forts, Rats and Falling in Love with Painting All Over Again... 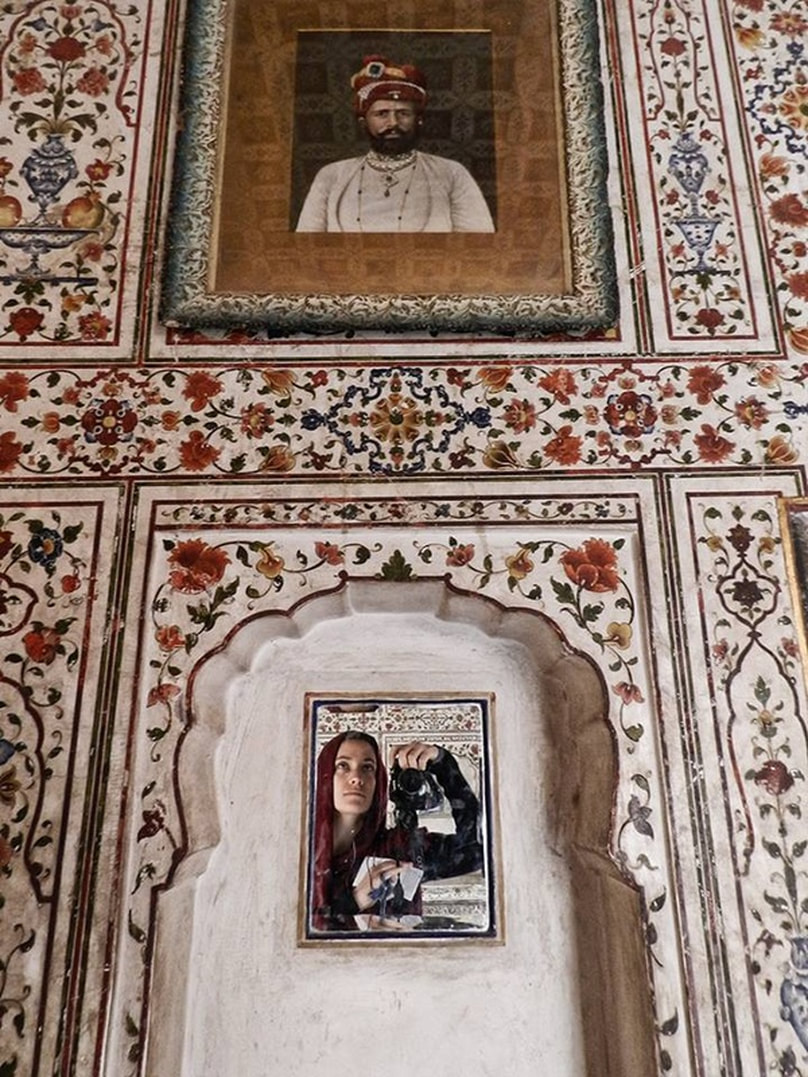 January 8th
Mosquito count: 5
It was very cold this morning. You could see your breath in the air. We began to rethink our desert camping coming up in the next few days. We met Hukam downstairs at 10:15. He called and let us know he was waiting. First, he took us to the Junagarh Fort. Amazing! 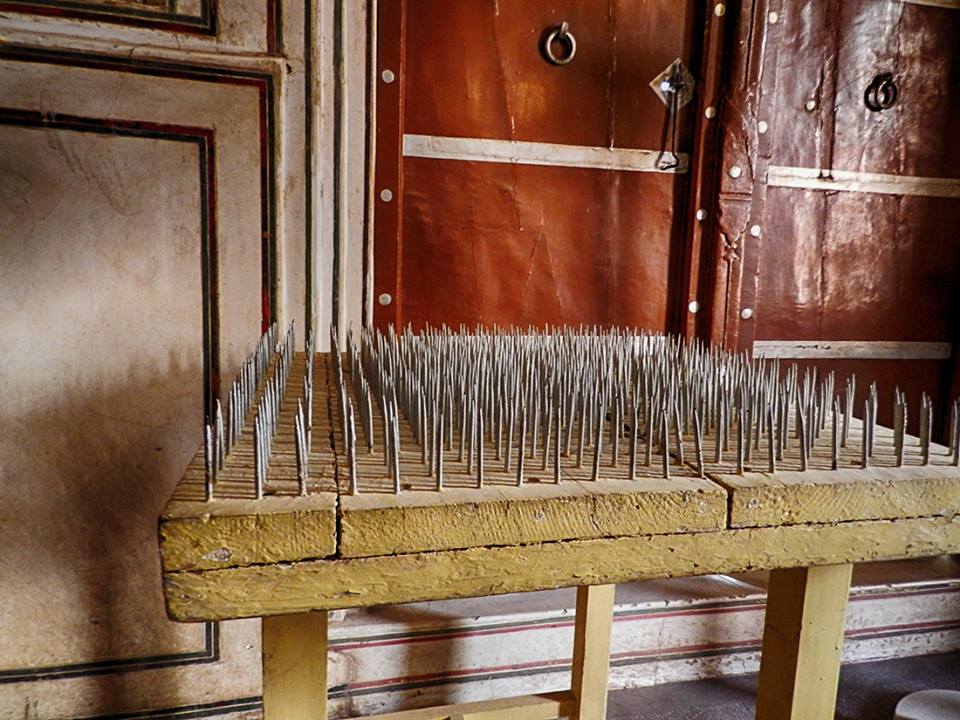 (Junagarh Fort - bed of nails)
There was an audio tour – they gave us a little player with pause, skip, etc, with ear buds. I tried not to think about the other people who had used my ear buds… The tour was about an hour and a half. I was running my last battery in the camera, and was surprised it made it through the entire fort! 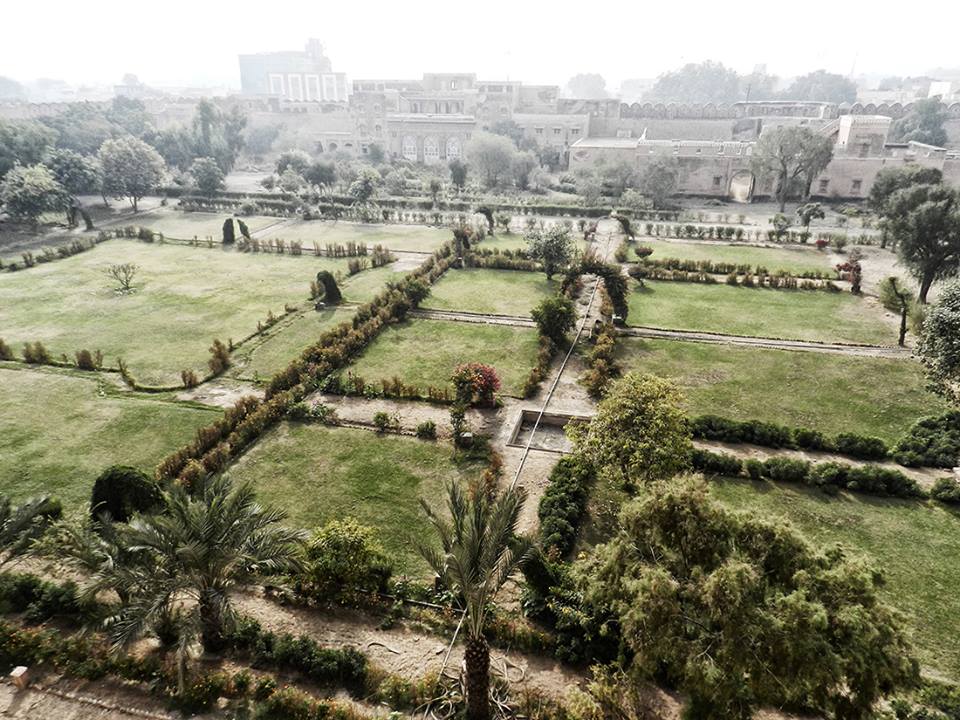 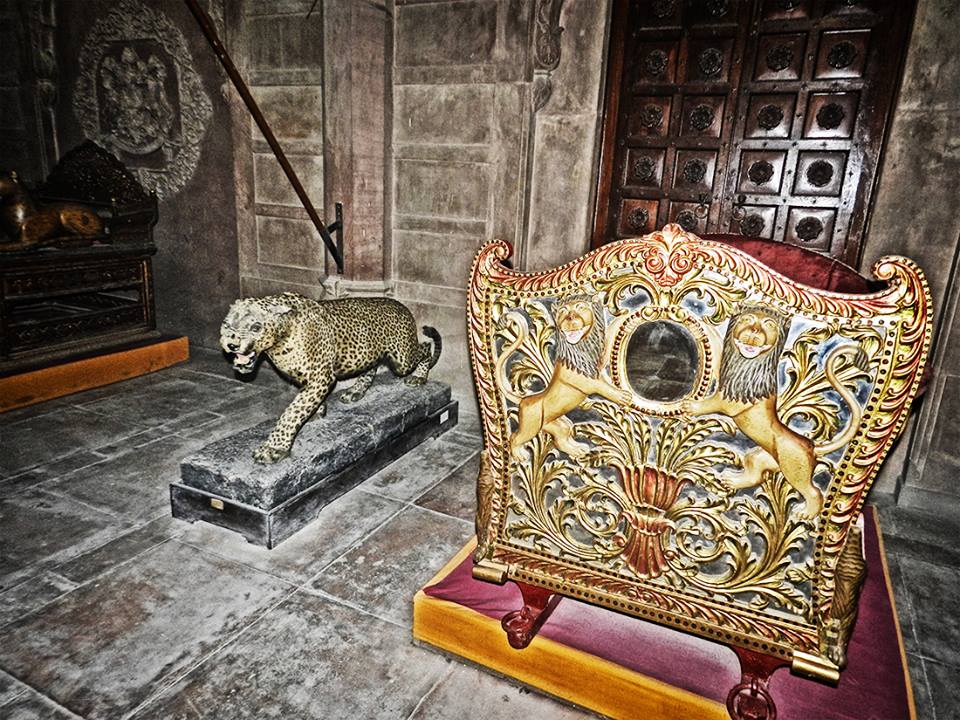 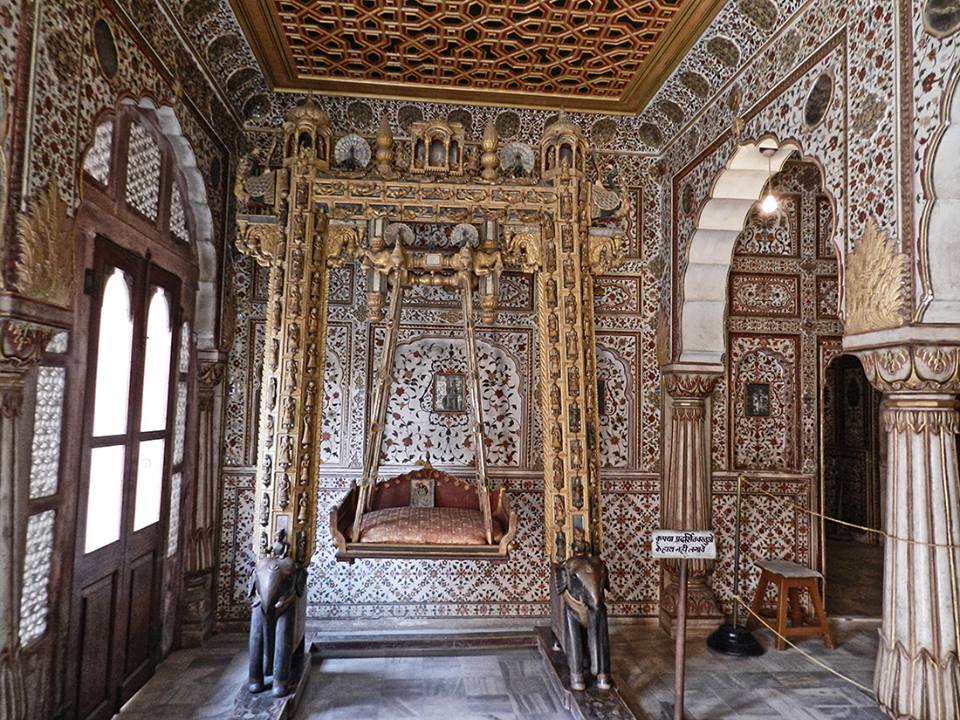 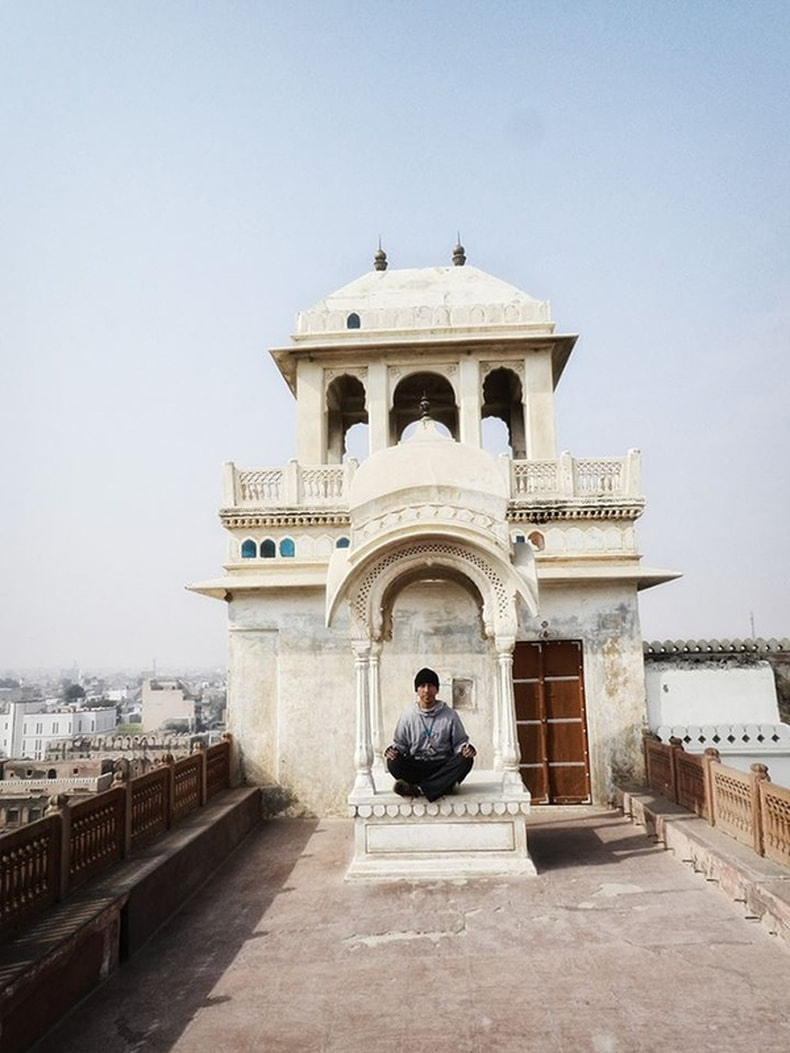 After the fort, we had the option of going to lunch, or heading over to the Mata Karni Devi temple straight away. This was the rat temple I was thinking of when we went to the Rani Sati temple earlier in the trip – no wonder people didn’t know what I was talking about and gave me strange looks when I asked them about the rats at Rani Sati :) 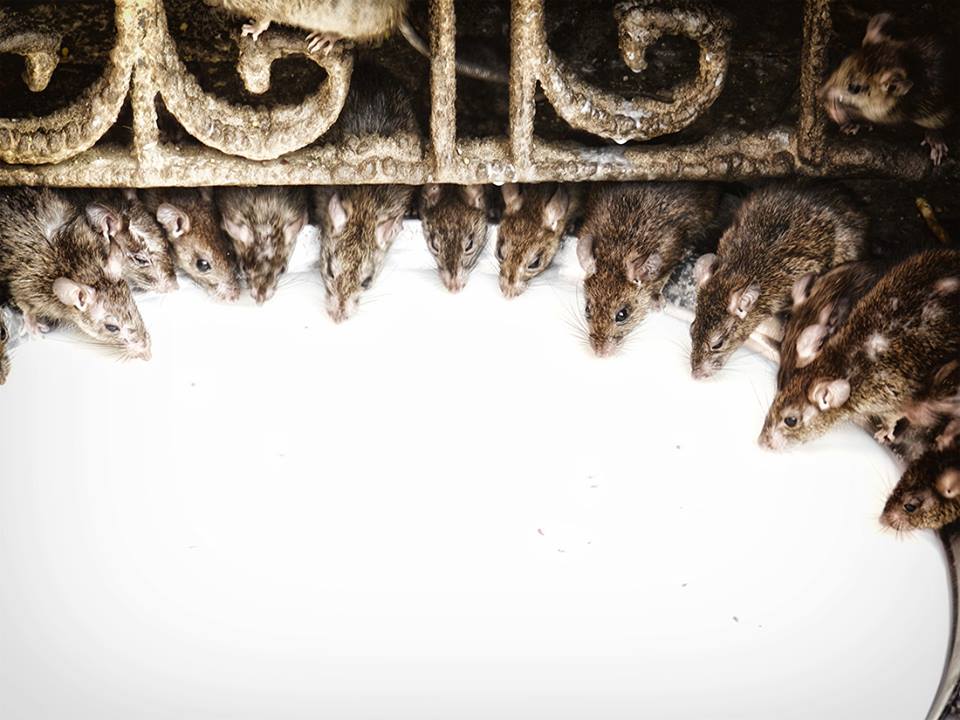 It was a little bit of a drive outside of town to the temple. When we got there, there was the usual crowd outside – people selling souvenirs and food, beggars, etc. We placed our shoes at the booth, and walked through the metal detectors at the gate (seems that all (well, most) the temples have them). This was the first temple that I felt gross about walking around in my socks – pigeon poo and rats all over the place. We walked into the courtyard and went to the corner, where the majority of the rats were concentrated. They were drinking from large saucers of milk, eating banana rinds, coconuts, bits of white popcorn-looking candy, and bread and the like that people threw to them. 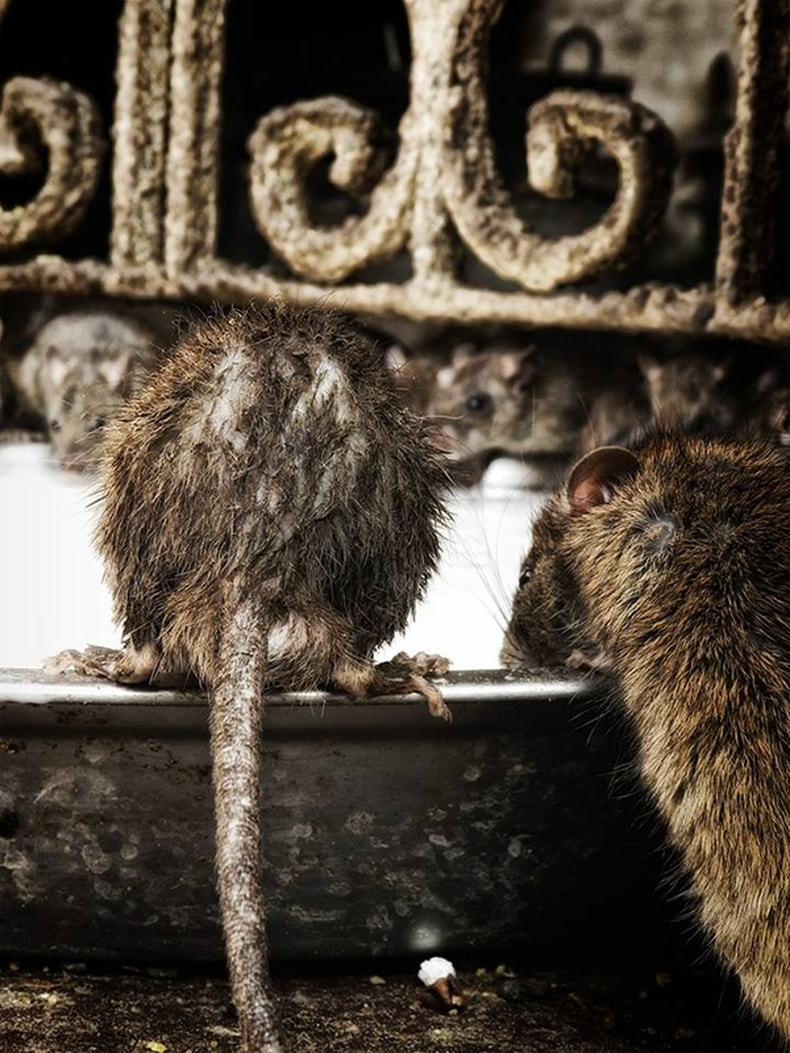 I paid the 20 rupee fee for camera use. The rats were crawling on the fence, over the sink where people washed their hands, nibbling on toes. Everyone was crowding around, trying to spot the white rat – it is considered good luck. A man shoved me out of the way, and I was getting some pretty strange looks. “Did you see it?” one man in the crowd asked. “The white rat?” I told him no. We didn’t end up spotting it. My last battery died in the camera shortly after we arrived, or course as soon as all these women in bright saris stepped right by me in the sun, lighting perfect, rats crawling around in front of them, falling off the fences and splashing into the milk. Oh well. We went to get our shoes. I saw a mangy, swollen dog outside, eating a treat someone gave it. It ate it, then began sniffing a female dog – she looked uninterested, if not a bit disgusted. 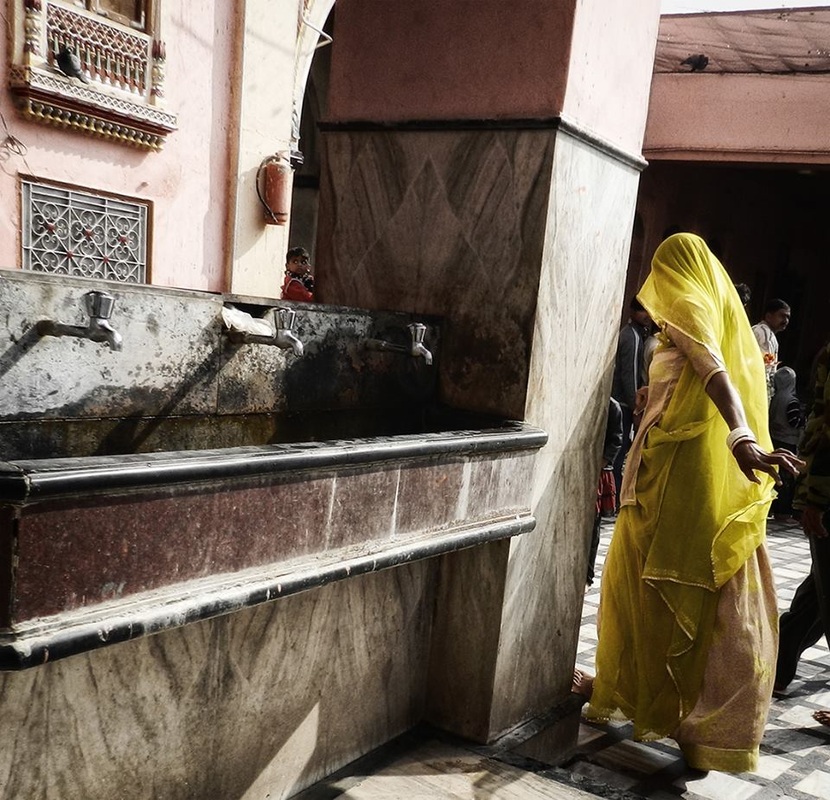 Most of the rats looked sick – scabs and puffy heads – some with milky-blind eyes. Many of them were fighting – one was rolling around in a plastic bag. One was trying to pull a newspaper that was folded up – another rat was inside it and finally jumped out of the newspaper and the other rat pulled the paper away. 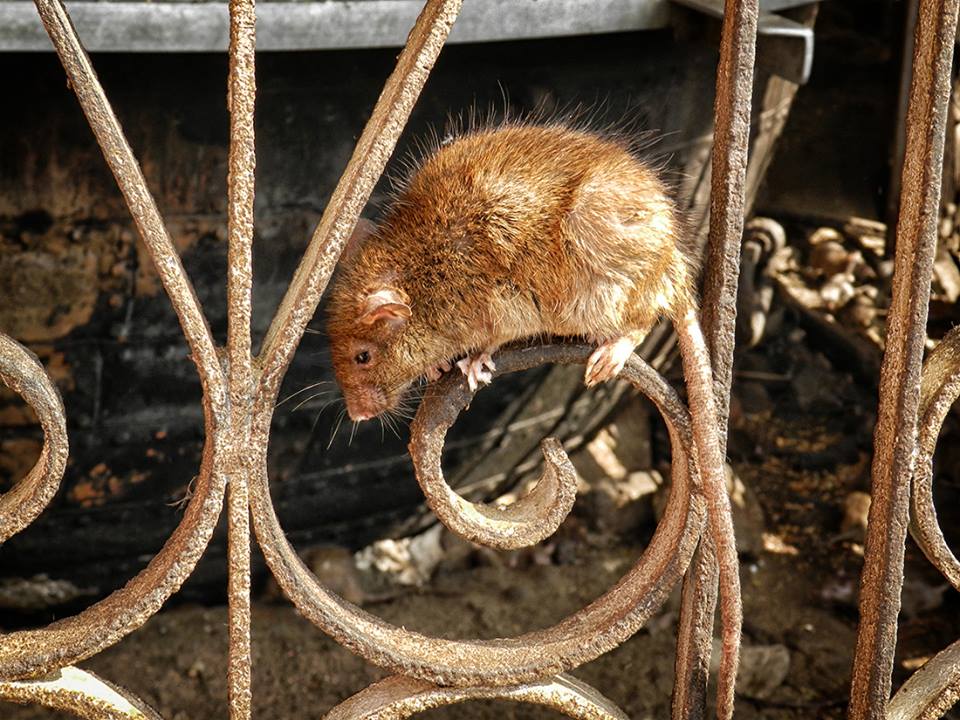 We went back to the car and headed off to lunch. On the way, we saw cows eating newspaper and Styrofoam. We went back over to near the fort and had lunch at the Gallop – the sign had a stallion on it, and everything – napkins, plates, cups, had the stallion on it.
…
I asked Hukam if we could go to a camera store to buy a battery, or to get an adapter for my charger. He asked to see the battery, and shook his head – “Adapter,” he said, so we drove to a section of town with little tiny electric shops. The first shop we went to – a young kid there – had and adapter, and my charger fit into it. I asked if we could plug it in to see if the light came on. It didn’t. We left, much to the kid’s disappointment. We went to the next shop over, and the man had an adapter there. We plugged it in, and the light came on. It fit loosely, however, and Hukam asked the man – I’m not sure exactly what he said, but asked him to make it fit better. The man took a small tool and moved the metal pieces inside around – bent them slightly – and it fit much nicer. I was very pleased. How much, I asked. The man said “40”. I practically ripped my bag open. Hukam held out his hand to me, and told the man 20. Then he told me 20. I took out 20 rupees, and we walked away with my charger adapter. Wow! Half the size or smaller than one I could get in the US, plus it works, and for around 40 cents! Can’t beat that. I was so happy, I almost skipped back to the car, but dodged traffic like a pro instead. Mike asked the waiter at the restaurant to plug in the charger while we ate – so I was only camera impaired for a few minutes. Maybe an hour... 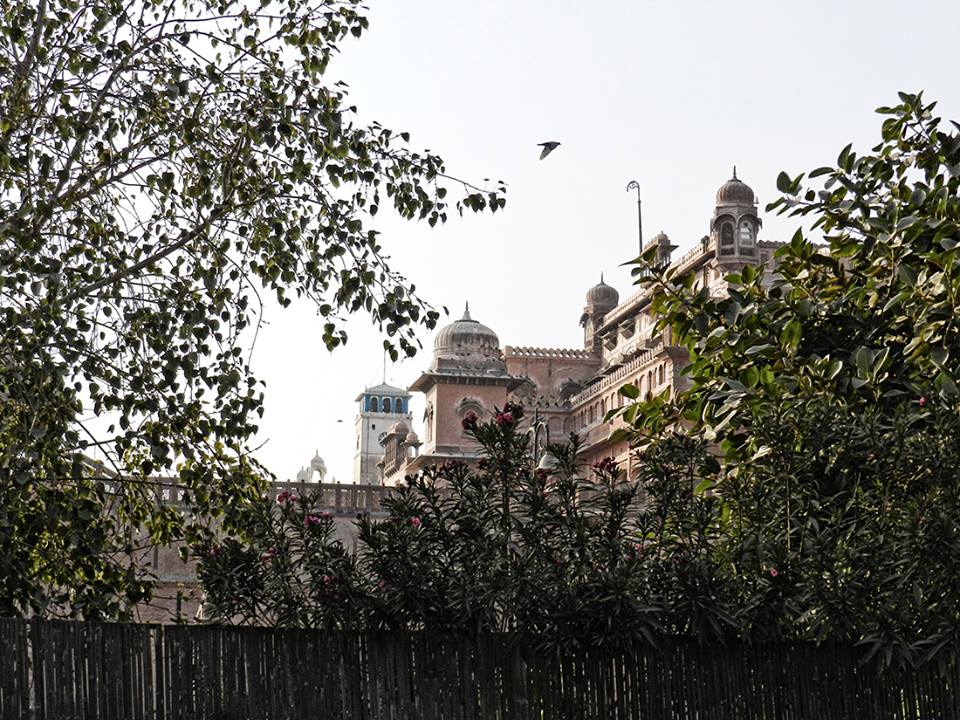 After lunch, we went to see “world-class painting”, as Hukam put it. It was amazing!

Shiv did a demo for us – he even painted my fingernail!

He showed us the pigments he uses, and his techniques. He let me take photos – “good publicity,” he said, and we laughed. The paintings were amazing! The detail was incredible! They gave us magnifying glasses to look at the paintings with.

Shiv is in the Guinness Book of World Records for the smallest painting! (1220 leaves; 30 birds; 70 flowers; 20 aquatic animals... all in a 3.5 x 5 cm painting - it took two and a half months, eight hours a day to complete!) We ended up buying a painting for the house, and I bought a small one that Shiv painted. I felt like crying, I loved that place so much. Shiv said I could go there to learn to paint – He said they do not charge people to learn, because it is a family tradition and they want it to continue – and the only way for that to happen is to teach them the techniques. When he learned I also like to paint, Shiv gave me one of his brushes – they are made of squirrel – or chipmunk – tail hairs, he said. I would love to go back and take classes one day.

After we left the painting shop – huge smiles on our faces, and our painting for our house rolled over a pvc pipe, and newspaper taped over it – I don’t know how that’s going to work at the airport – ha ha! – we were going to go to a camel fair, but when we got there – it was just around the corner from the painting shop, there was no parking, and it looked as though most of the camels had already gone home, so we just came back to the hotel – very happy, though, and feeling like we had a full day anyway. We decided to cancel our camping, and forfeit for a hotel, instead. We are being cold weather wimps. 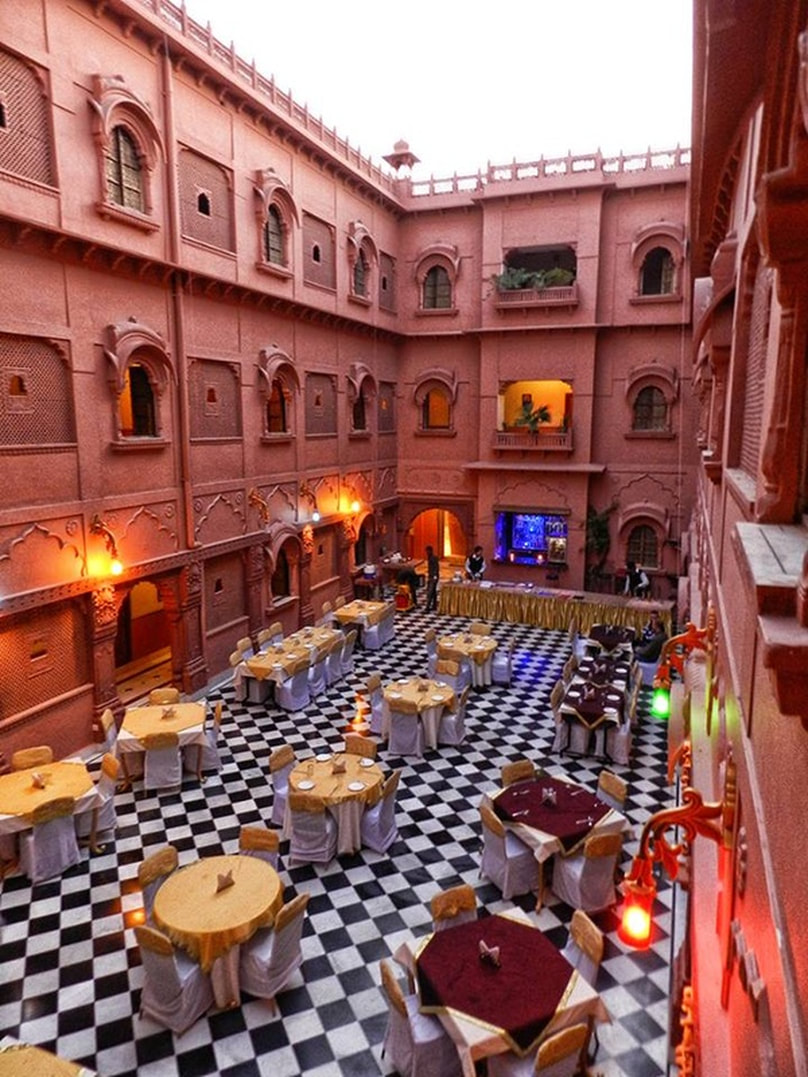 We went down to see if we could use the internet, but it was down – I guess we were lucky to get on when we did. We walked around the hotel a bit and took some photos, as we are leaving in the morning for Jaisalmer. We had our laundry done, we had it picked up this morning, and a man just brought it to our room – nicely folded in a little pink bag – he brought it into our room and placed it in our closet. He then took our trash out, and asked “What can I help you with?” We tipped him and sent him on his way.
…
Dreams and homesick
My second night in Delhi, I had a dream that the driving back home was like the driving here, and I had to go somewhere in my car. I ended up leaving my car at the destination, because I didn’t want to have to drive home.
The next night, I had a dream that in the sky over Albuquerque, there were two vortexes, and all the stars were sucked into them. I could see the stars swirling around inside them, and all the rest of the sky was black.
On the 7th, I had a dream that we were returning home, and at the airport, a security guard stopped us. He said he had to put us through some kind of scan, and made us stand together. Then, he sprayed us with some type of foam – like what comes out of a fire extinguisher. I got very upset and grabbed a fire extinguisher and sprayed an entire section of the parking area with it, including the ground, cars, and people. A guard came up and said, “It’s ok, because they sprayed her inside the airport.”
Bouts of homesickness come and go. Sometimes something will trigger memories, and I almost want to cry. I miss the dogs, the house, and my family not here with me. I miss familiar things I do regularly – but am having a good time, and don’t feel bad often.