Born from the Wreckage... 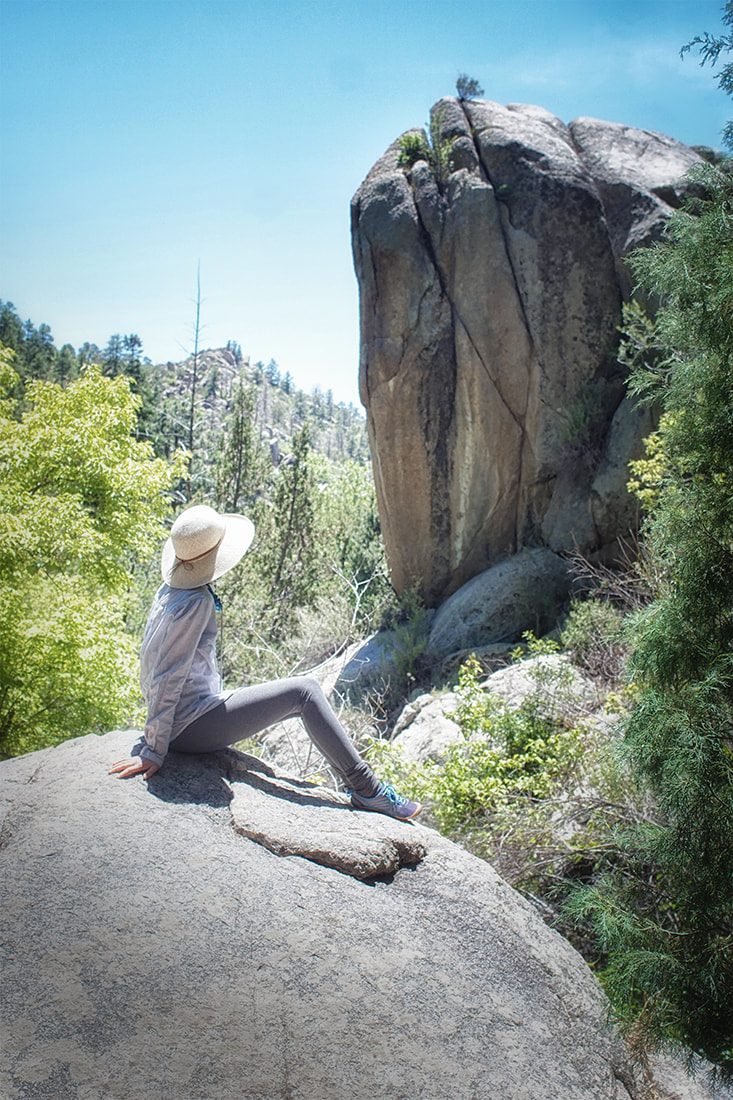 For years, I'd wanted to hike up to the site of a plane crash in the mountains just outside of my city. Time passed, and I didn't make the trip. I was pregnant and didn't feel up for a 7-plus mile strenuous hike, with portions climbing over 10 ft boulders. Or, I had a newborn infant and his older brother to take care of, plus heal from a c-section, and try to make sense of my new life in all its glorious chaos. I know. Excuses. Anyway, the day finally came that I got to make the trip.

My sister brought up the idea of a social distancing hike. I liked it. I felt it worked on multiple levels, getting the rare occasion to get out of the house, but to get away from most of the people. We are still on a stay-at-home order. Exercising outdoors is allowed, but it must be done 6 feet away from others who don't live with you. Mental health is also a valid reason for going out, away from home. Since the end of March, so more than 3 months now, I have stayed home almost exclusively, except for the monthly to bi-monthly excursions for food, and then we did take two bicycle trips out around the neighborhood, too. There was also the trip out to a friend's farm to pick up our monthly chickens from her CSA program, and the kids were SOOO excited to get to go somewhere in the car, you would have thought that I'd told them we were going on vacation to Legoland or something...

I guess the point I'm trying to make is I haven't been going out much. So a hike, alone with just my sister, and our kids at home, seemed like a dream come true. I put out the idea for the hike to the crash site, and we both agreed it would be fun to try, though I tried to not be too set upon reaching our destination, as the instructions I'd found online (I somehow couldn't locate the book that I'd first found it in...) seemed to be fairly complex, or at least, it seemed to be somewhat easy to lose your way on the unmaintained trail, without a GPS, which neither of us had. We decided to give it a try anyway, and just go for the adventure, not the destination.

We started out early, meeting at the Open Space just as the gates were set to open - though had I known that there was no one there to collect fees or open the gate, we probably would have done better to arrive even earlier and did the self-pay, since the gates would have been open, I'm assuming. There were plenty of other cars already in the area when we went to park, and several folks already returning from their excursions just as we were starting ours.
It was still fairly cool, compared to the mid to upper 90's it was set to reach that afternoon, and we set out on the open space trail that led up to the branch off into the wilderness. Soon we reached higher elevation where more trees provided shade - lots of box elders, and a couple apple trees that looked to be from some hikers passing decades before us.

The trail meandered along a little creek, and we walked under the dappled shade until the turn off to the final descent up the mountain, into a canyon where the pieces of the plane found their resting spot when they crashed. Along this final leg, there was much more greenery, and bees, hummingbirds, and butterflies flitted about tirelessly, visiting the pink blooms on the ancient, twisted locust trees and countless other wildflowers and flowering bushes lining the trail up into the canyon. We rested on cool boulders in the shadow of the cliffs, and occasionally the eerie scraping noise of the tram would distract us from the stillness, its lines passing almost directly above the crash site.

The 'entryway' to the wreckage was marked with a portion of the plane, a part of the body with a window that was broken out, and a very weathered and condensation-filled sign that told the tale of what happened to the 16 people who boarded a plane headed for Santa Fe and lost their lives when the plane crashed into the cliffside minutes after takeoff. It was hard to read the information because of the amount of weathering, so I've copied the text from the site where I found the hiking directions, and am assuming it is accurate, though I did have to correct the flight number (click here to visit the site; here is a link to a Wikipedia article, as well):

TWA Flight 260 departed Albuquerque for Santa Fe early in the morning on February 19, 1955. As the weather was overcast with very poor visibility, their air traffic control clearance was to proceed via instruments to intercept the localizer at Santa Fe; a procedure that would normally allow them to climb and navigate away from the mountains safely. Sadly, it was later discovered that a malfunction in the instruments led the pilots to believe they were flying away from the Sandias when they were, in fact, pointed directly at them. By the time their error was discovered, it was too late, and sixteen people met their tragic end only a few minutes into the flight.

I wasn't sure how I would feel wandering over the rocks where 16 people had lost their lives. With the strangeness of the world amidst the pandemic and the social unrest, I felt a sort of strange urging to be closer to death, physically closer to this sacred site where so many people died, and yet, in this canyon where plants were overtaking the wreckage and birds and insects were very much thriving, it felt very much like a place of life. A place of new hope. I felt peaceful, sitting in the cool shadow of the mountain, surrounded by so much death, and yet life was overwhelmingly present.

We wore masks. At least, we wore them around our necks, and kept distance from each other as we hiked and talked. So much talking, and laughing. The ridiculous chatter of sisters kept from talking candidly for much too long. We joked that our ruckus was loud and offensive enough to let anyone else out there know to steer clear. We set the way for social distancing by our silly, and sometimes serious, banter.

We only saw a few other souls way out there. At the marked entry to the site, where there was not room to get off the trail far enough, was a father and his grown son, there to also explore the wreckage, so we pulled our masks up as we passed them. They did not have masks and gave us sort of strange looks as we put ours on, but nevertheless, I felt slightly more at ease, and we didn't stay in close proximity for very long.

After looking around for a bit, we found parts of a wing, a seat, the propeller and engine, other sections of the body of the aircraft, a tire, and unidentifiable pieces of twisted, banged up metal, scratched and cut up from smashing about on the rocks as the plane crashed into the canyon. People had climbed up to retrieve the bodies, though left the debris there, and it is still there, due to the remote location of the crash. I wondered what bodies would look like, if there were even bodies, or just pieces. If the steel was cut up into jagged pieces, a soft human body would fare far worse. I turned my mind from the subject.

We paid our respects to the dead, to the silence, to the canyon, and then we began our descent. Stopping at a particularly nice outcropping of large granite boulders, we paused for lunch, resting in the shade of a huge ponderosa.

Down and down we descended. Usually, the way back down is much more quick, though it was so steep and slippery with the loose sand and rocks in so many places that going back down took quite a bit of effort, too. We tried to avoid climbing down the huge boulder, but it seemed much less formidable going down, using the large tree trunk that had been placed alongside it. Eventually we were back down alongside the little creek, and dozens of butterflies of all different types were enjoying the cool running water and the minerals in the mud on the edges of the channel.

Cactus and scraggly junipers began to reemerge in the landscape. We somehow ended up on a whole extra outward loop that probably added another mile to our journey. We shot off the trail on the road that leads into the Open Space, so we trekked along the pavement - wonderful in the heat, with the waves just radiating off the black asphalt. "Why didn't we make this mistake when it was cooler?" I asked, melting with each step. I'd run out of water a ways back. My sister had been talking about people being found in the desert that had saved their water so they wouldn't run out, and had died of dehydration, so they are found dead yet their containers still held water. I told her they wouldn't find any water when they found me.

We made it safely back to our cars, gave virtual hugs, and headed home, exhausted, hot and dusty, but our hearts and minds energized and full.

It was a transformative day. 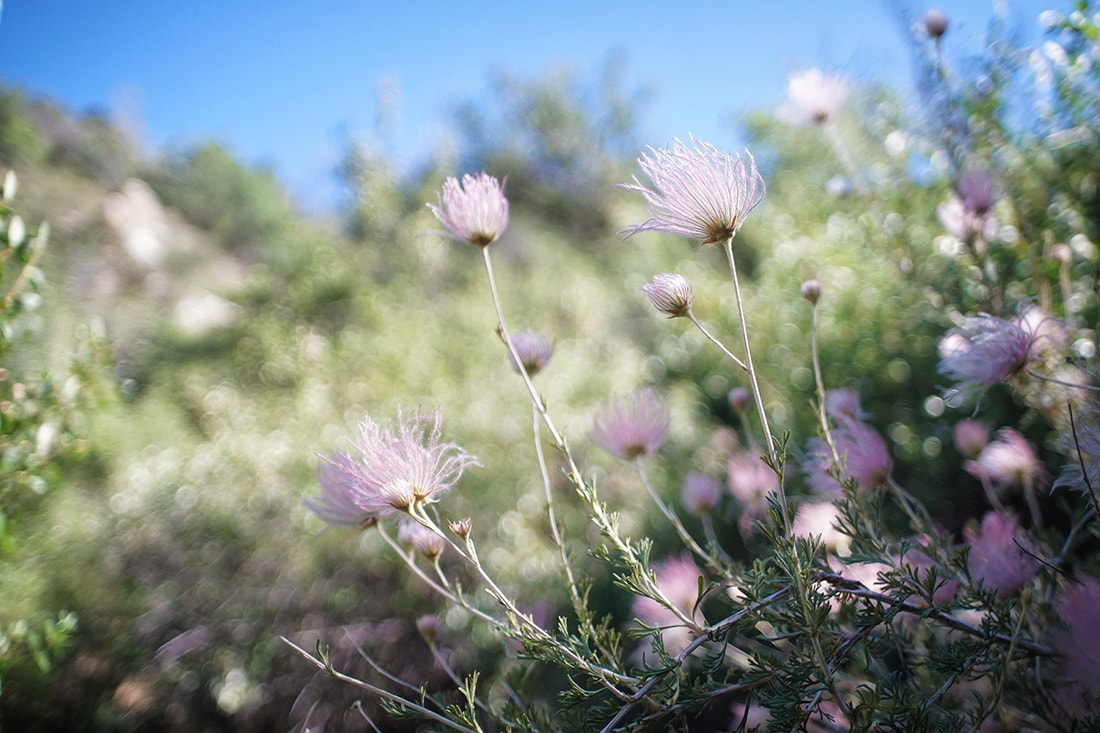 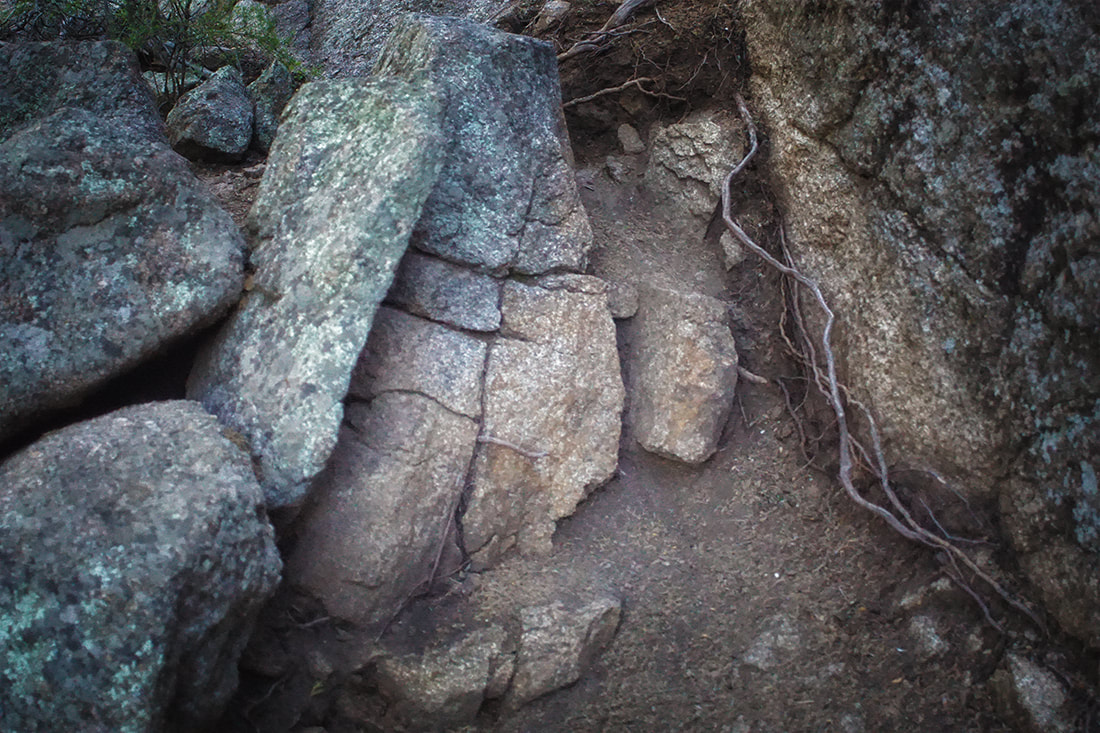 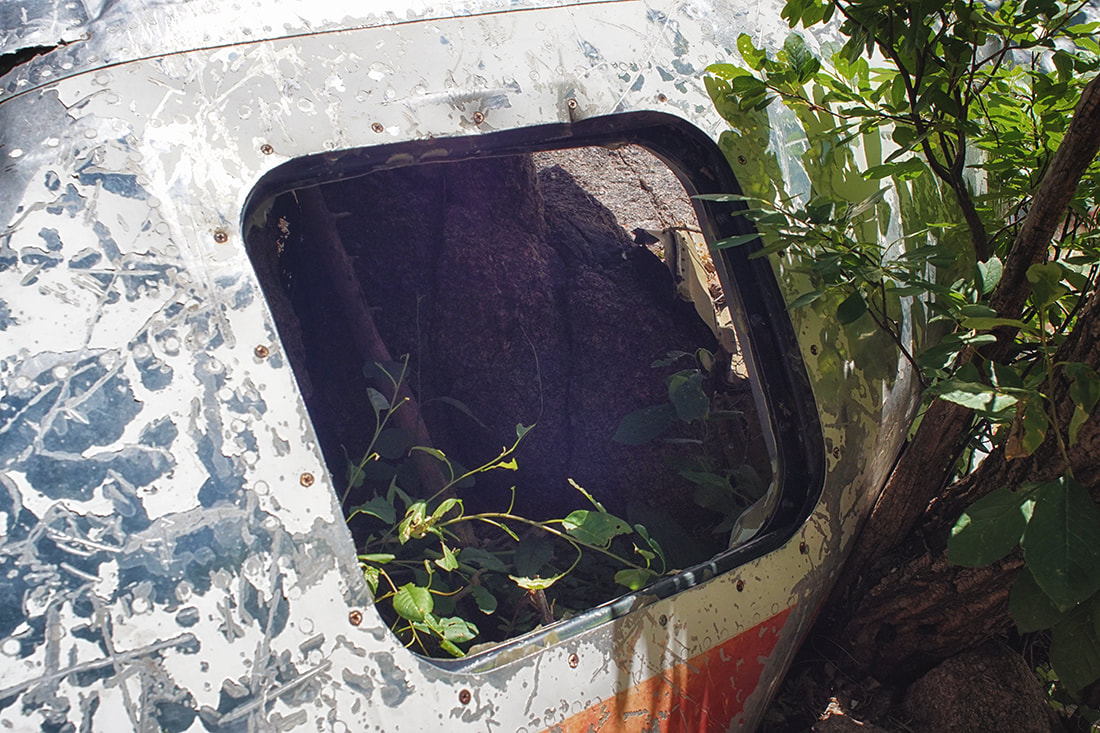 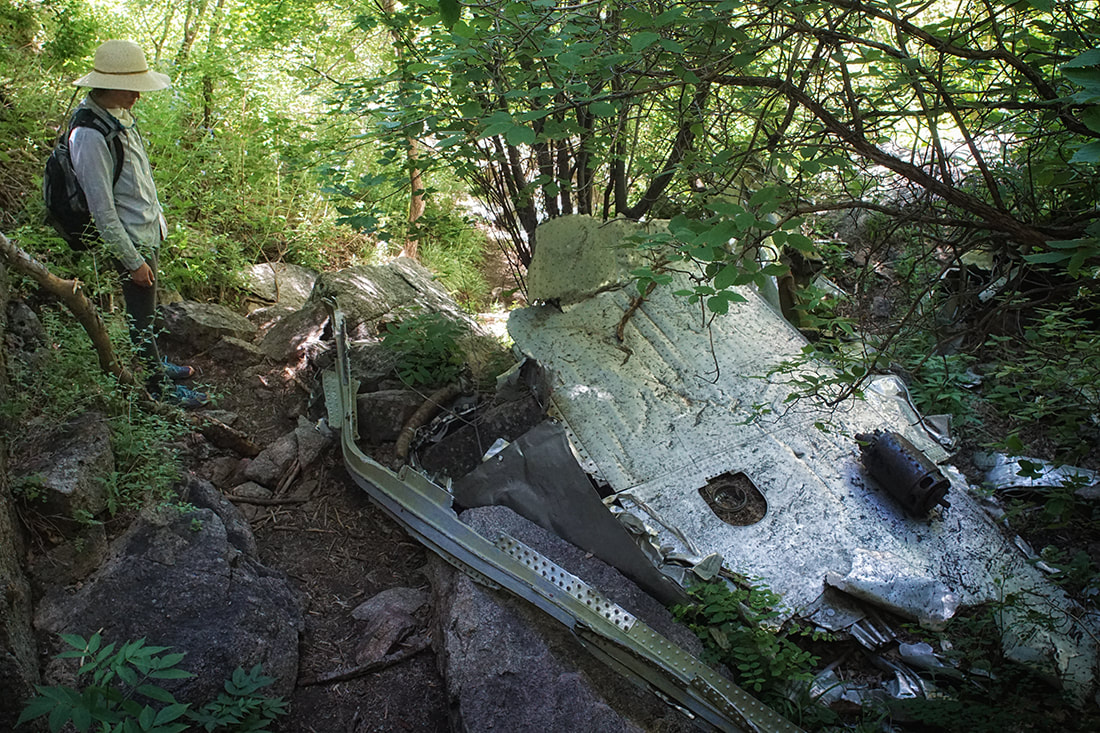 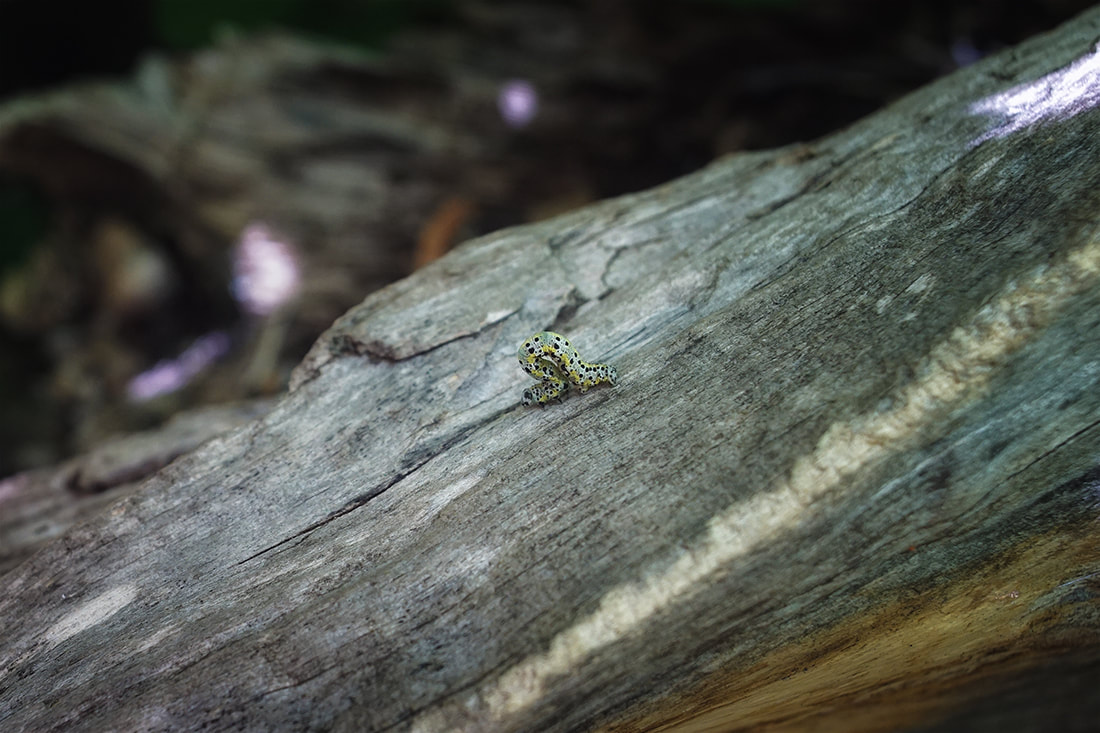