...and Giant Statues will Lead the Way to the Countryside...

Awoke early again, 5 am, and the horns, birds, and dogs all got up. I heard what sounded like Indian opera outside.
I sat in the window again and took some photos. I saw seven (!) dogs come up from a hole under the street – two adults and five juveniles. They all ran down an alleyway together. The other direction, two other dogs with coats on walked the street.

It seems a bit clearer today, but colder, as well.
The air outside the windows smells like fireworks.

I hope to get some bananas and oranges today, and trade my money in for rupees, as well, before we leave on our tour.
… 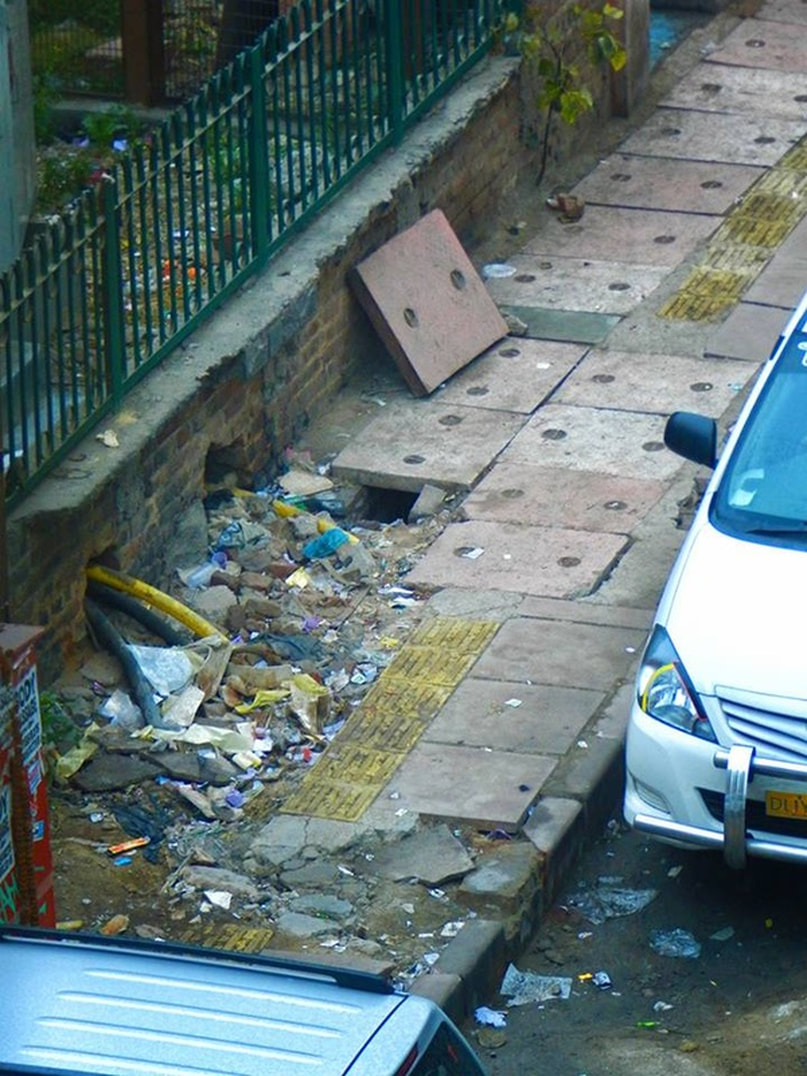 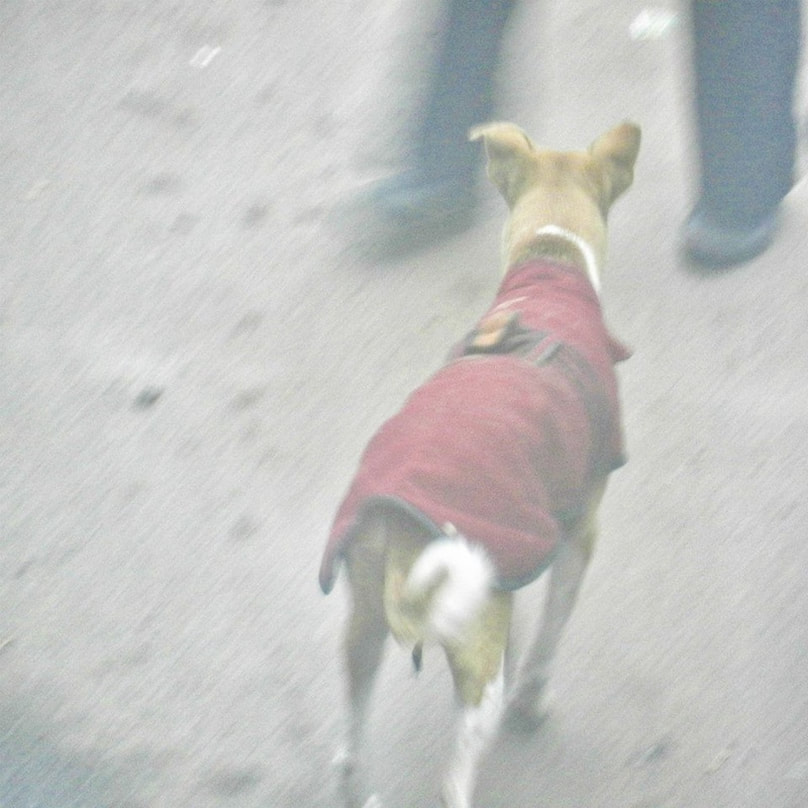 We were met by our new driver, Hukam, at 10:30. He had rode a bus all night from his home village in Uttar Pradesh and arrived at 6:30 am. We filled up with gas before heading out on our journey.
We left Delhi on the highway, and stopped at huge statues of Shiva, Ganesha, and others. 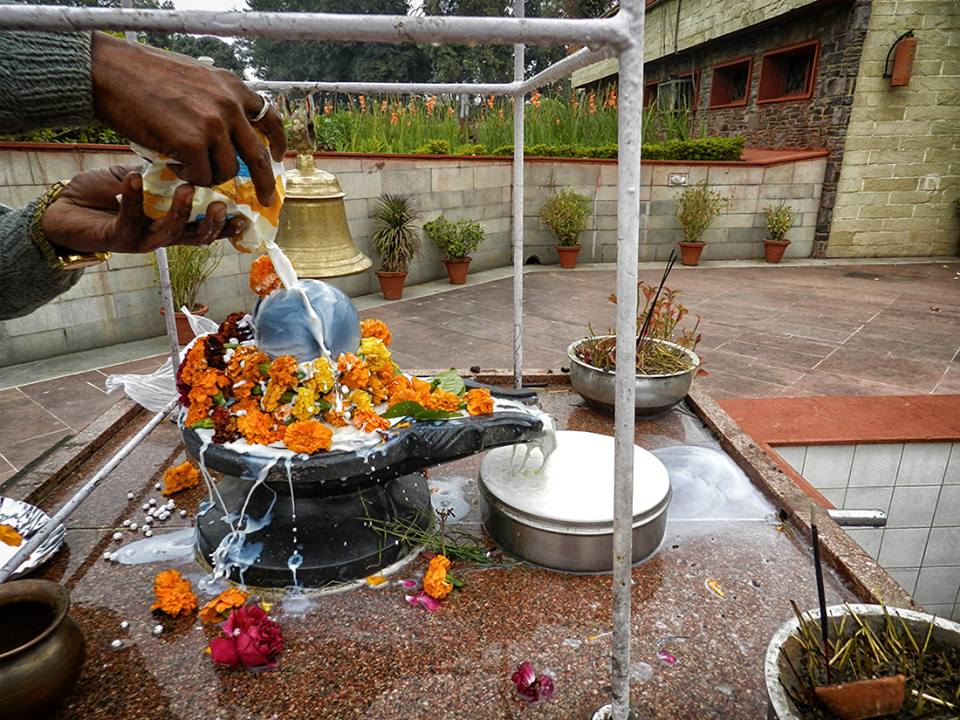 Hukam poured milk over a dish (a Shiva lingam) at the entrance, and told us it is good to pray to Ganesh at the start of a journey – when you are starting something.
We headed out on the road for Rajistan. The roads were less crowded, and we were soon out in the less populated areas in the country. It was agriculture area, said Hukam, and told us that the huge fields of yellow flowering plants were mustard. There were yellow fields everywhere. 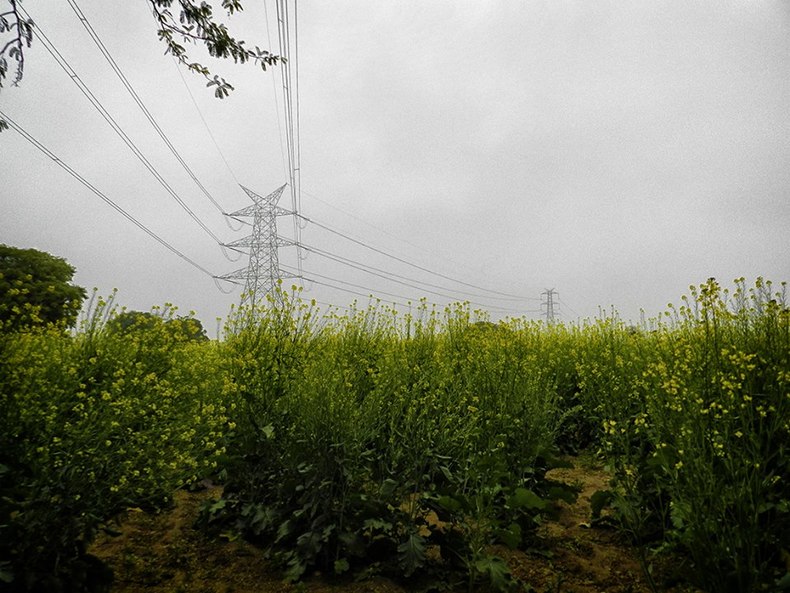 We passed many people living on the roadside – they have little tents – if anything – set up, and cook, bathe, etc. all in that little space. I saw a bunch of clothes hanging out on the fence in the middle of the lanes of traffic. I joked to Mike, saying we should have hung our clothes there to dry.
-After washing them in the sink, I had expected them to dry overnight – but due to the cooler temps and the humidity, they were almost as damp as when I hung them up.
…
We drove by many military buildings – the first one had a tank outside by the highway, and a jet.
We also saw the metro rail from the airport, and many cars. On the edge of Delhi, there is a toll station. Many beggars knock on the windows. Since first giving some money to beggar children in Delhi, and Prem told us it is better not to give them money, because it often goes to whomever they are working for instead of them, we split up the tic-tacs Mike’s mom had given to us into little containers to give to the kids. A small girl came up to the window, and Mike gave her the container. A woman with a baby came to my window. She kept knocking. I still hadn’t changed any rupees, and felt like tic-tacs wouldn’t do her any good. As I sat in my newly bought clothes, with my new camera in my lap, I felt like such an asshole for not giving her anything. She was the first of many. 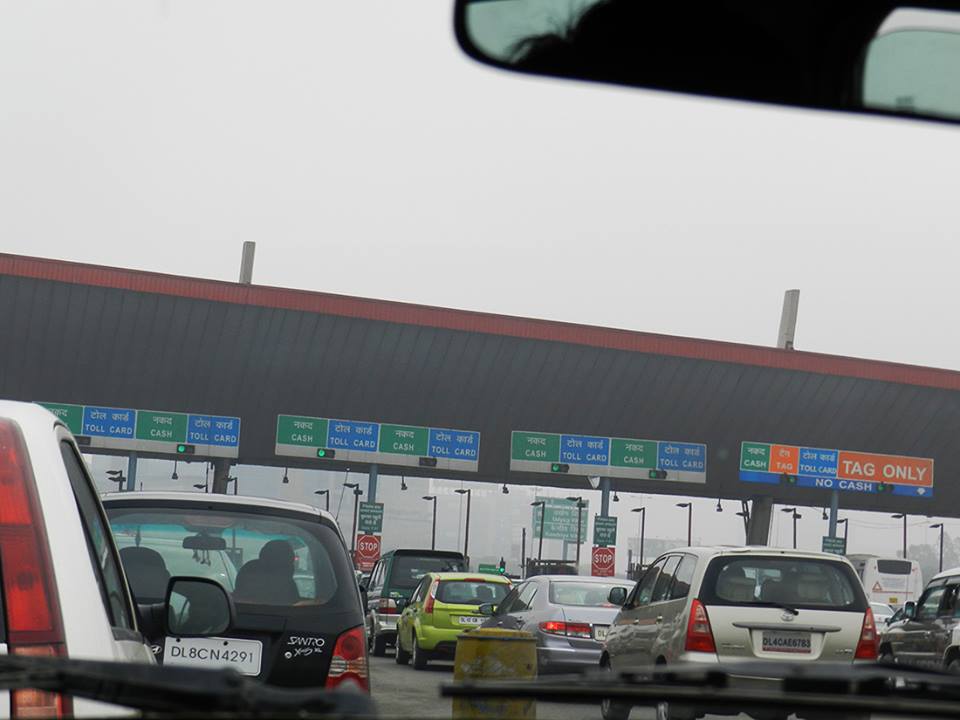 There were beautiful houses set in the fields, and once again, a myriad of tiny shops just about everywhere. I started seeing cows. Lots of them. Eating garbage with the dogs. I saw a cow eating a condom… 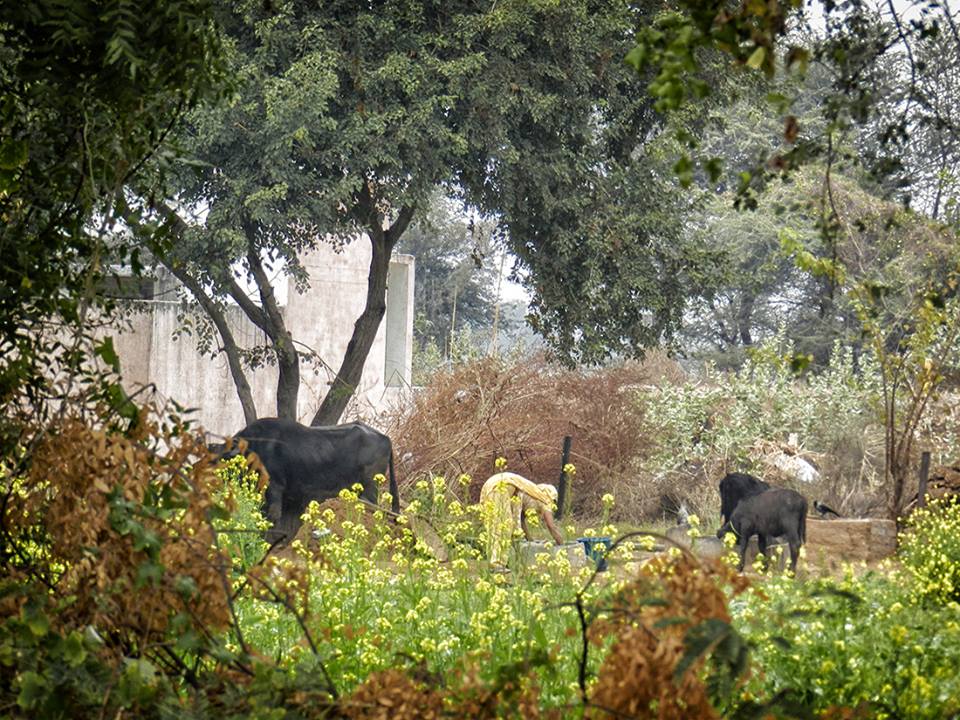 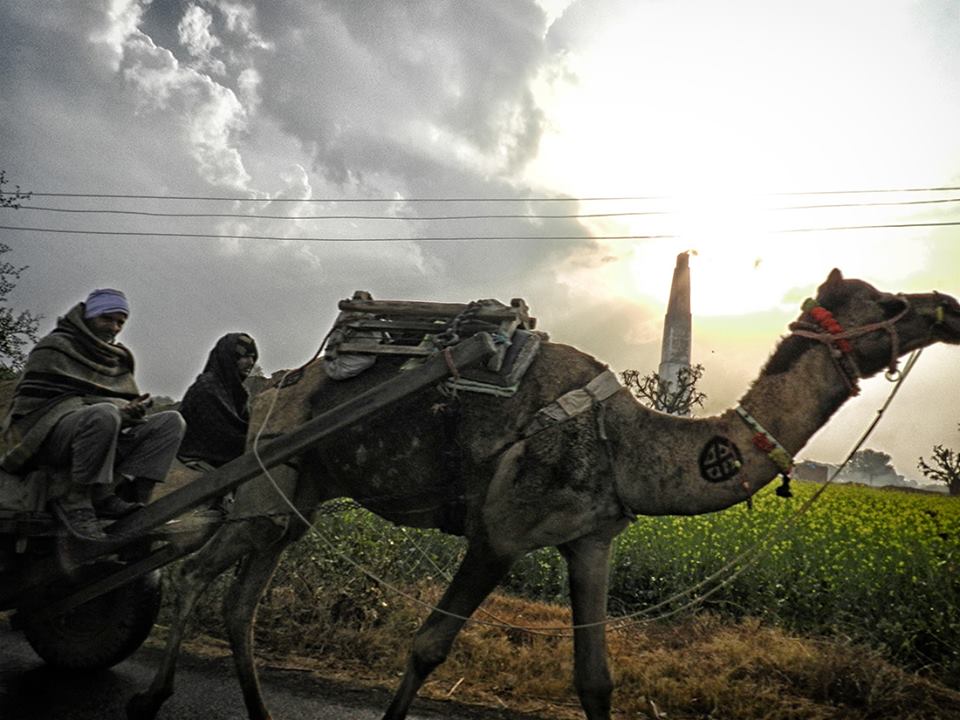 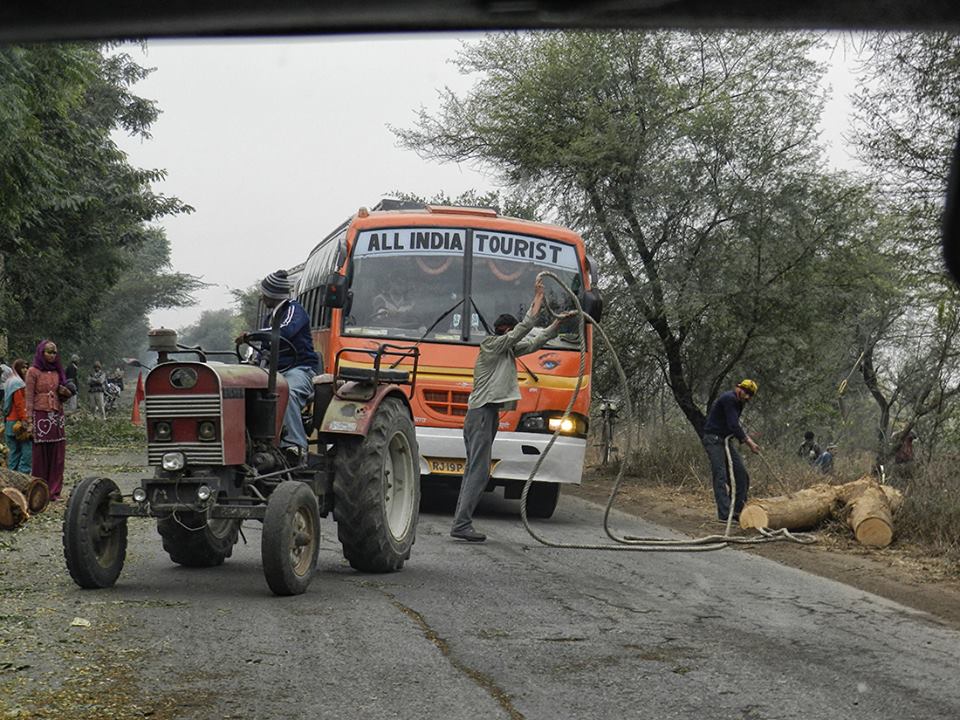 I am amazed at the resourcefulness of people and animals here. Even in the most barren and hard places, without anything, they are still managing to live a good life, using what is around and what is available to them. It is an inspiration to me – there are so many things that can be taken for granted. 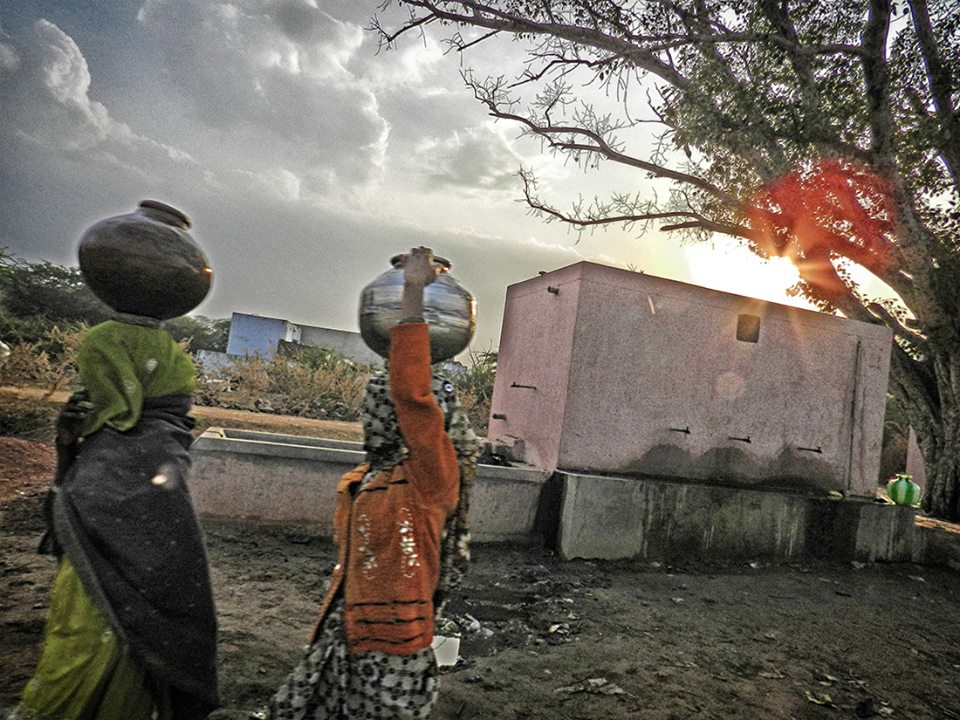 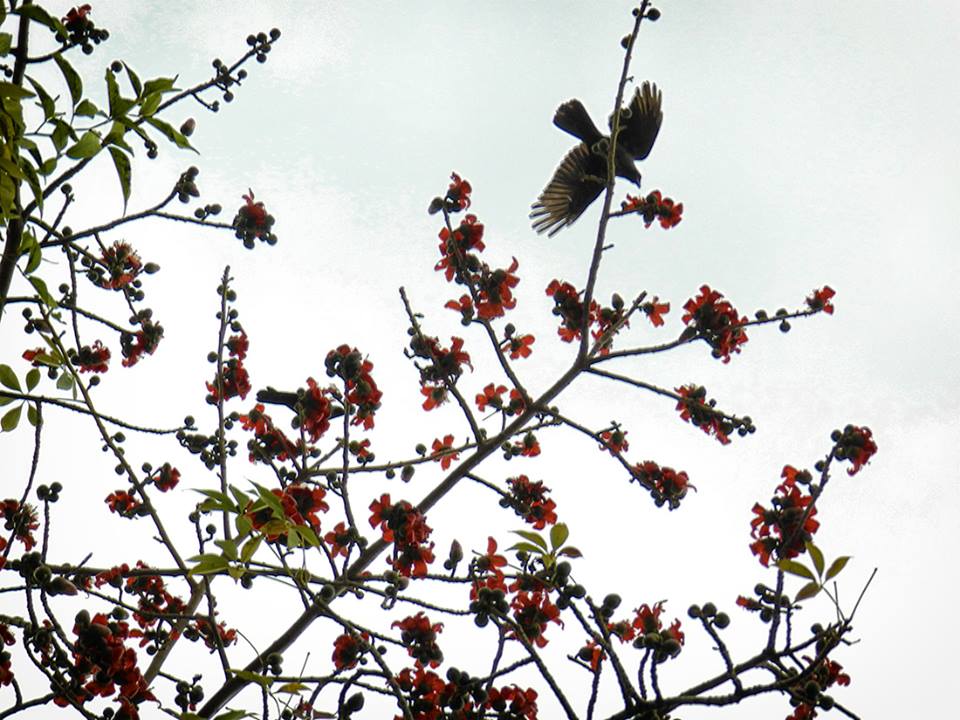 We stopped for lunch at a nice little “resort”. 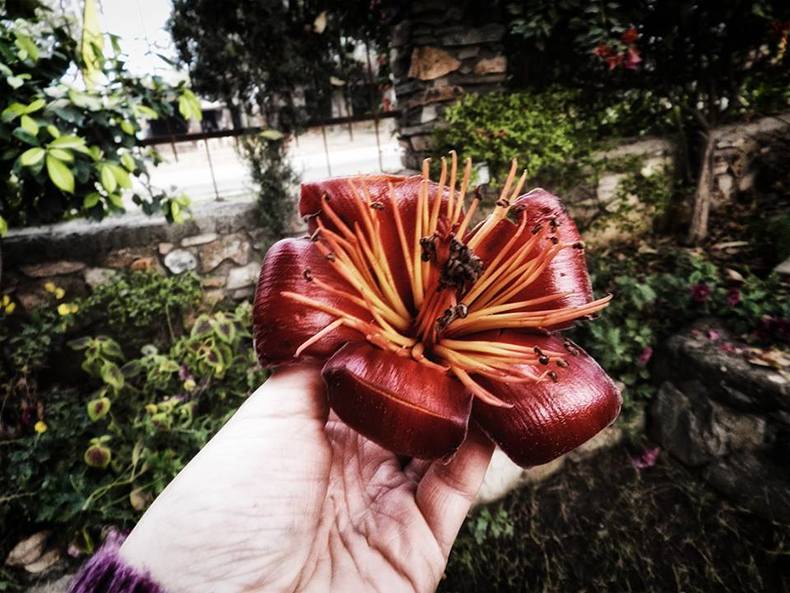 We ate in the garden until it started raining. (Banana flower)
Then everyone ran out and grabbed our plates and seat cushions and we ate the rest inside. I had a banana lassi and dal masala and garlic naan. It was delicious! It was about $7. 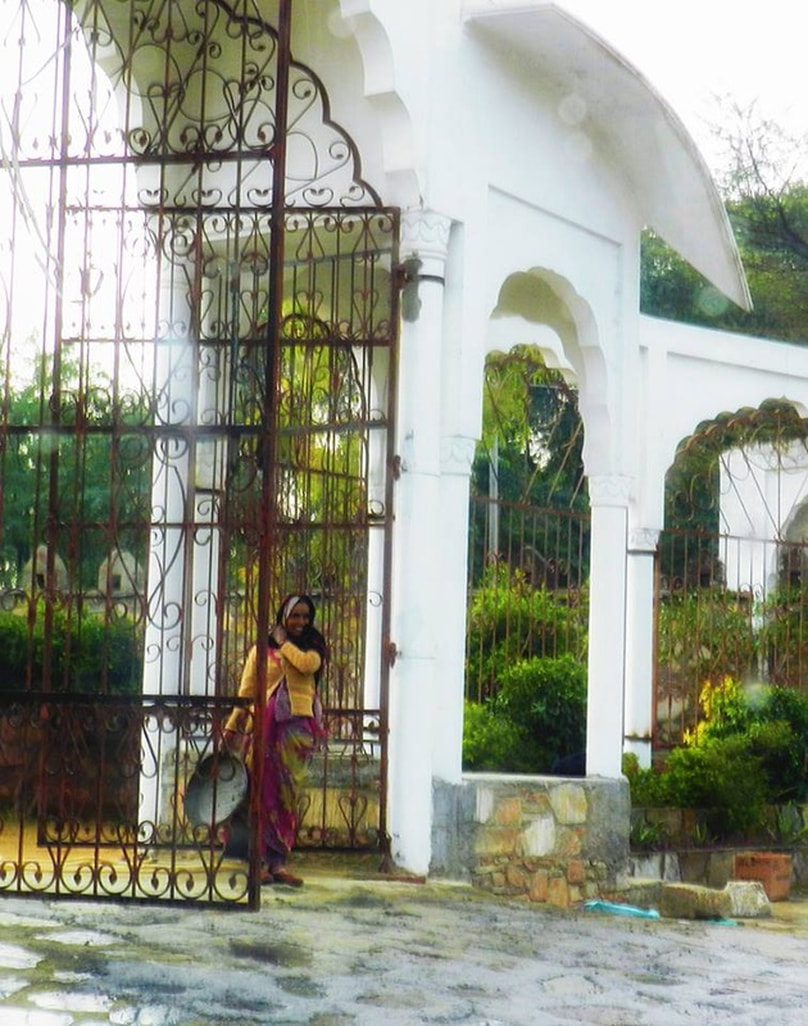 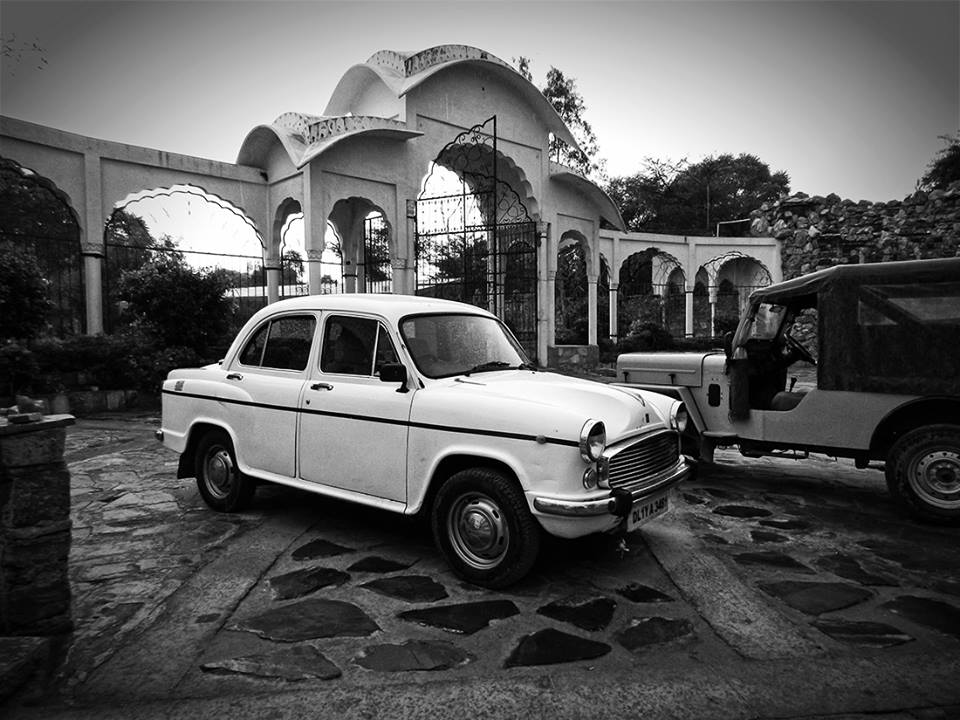 On an auto-rickshaw on the way to Bikaner – Better late than accident.
…
A few words about driving here in India, and the roads:
On a two lane road, there can be as many as four lanes of traffic, including horse/donkey-drawn carts, bicycles, cars, trucks, auto-rickshaws, cabs, all honking and changing lanes – and all working together, fairly well.
As far as smaller roads go – on a single lane “paved” road, if you are bigger, you have right-of-way. You honk for people to get out of your way, and you move out of the way for trucks and busses. At night you flash your lights. 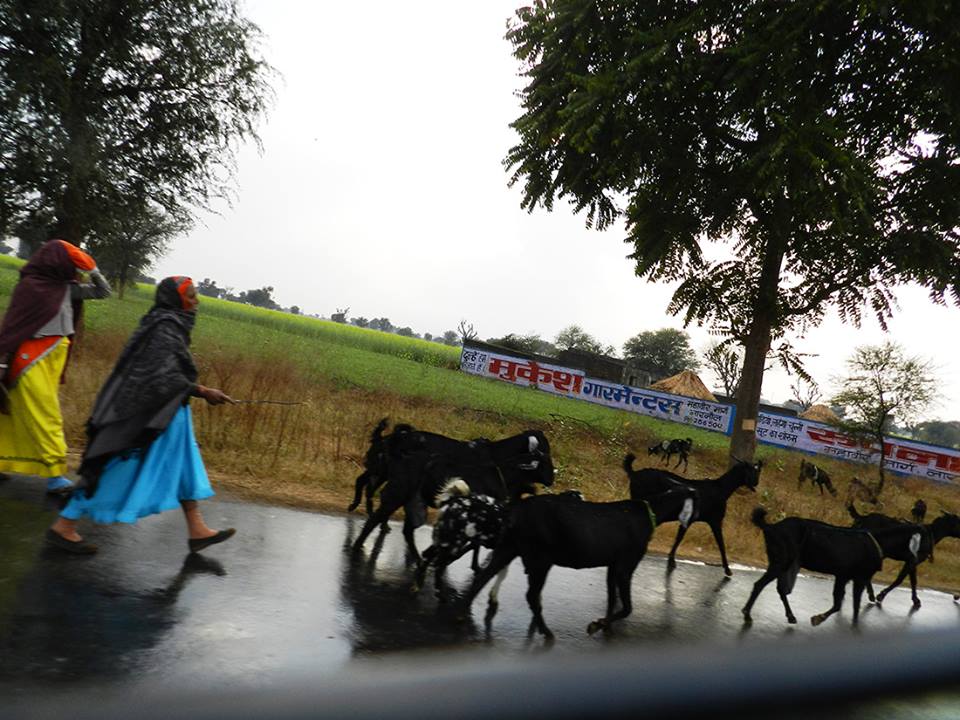 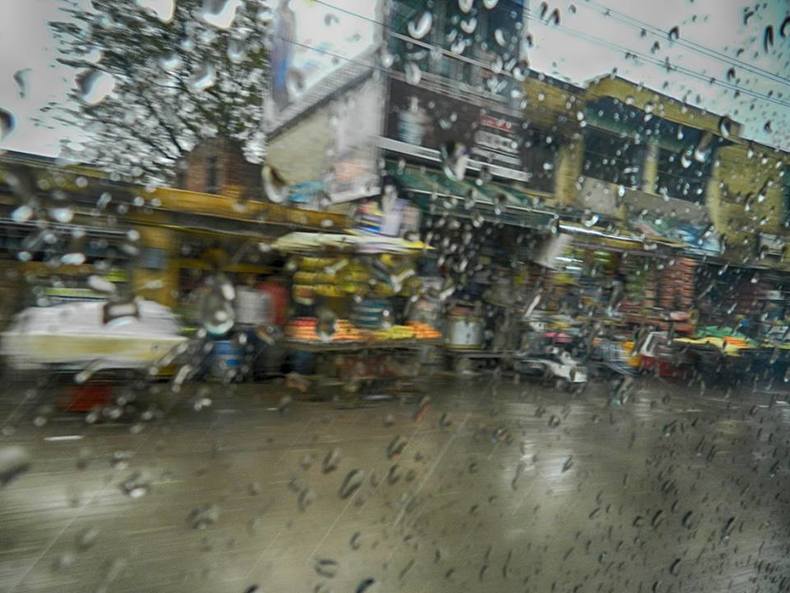 We drove for a while in the rain. The windows fogged up for a while, and Hukam had to keep wiping them with newspaper.
The rain soon stopped, and the colors all around us were even more pronounced and vivid.
I took many photos out of the car window.
Around 6 pm we arrived in Jhunjhunu for the Rani Sati temple visit. We walked around the grounds – a thousand rooms, apparently, and went inside the temple where the priests were performing a ceremony. The temple inside was beautiful. Many pictures, and made all of silver and gold, with patterns all over the walls and pillars. I kept waiting for the rats to come out… Soon we left, and the guard kicked us out. 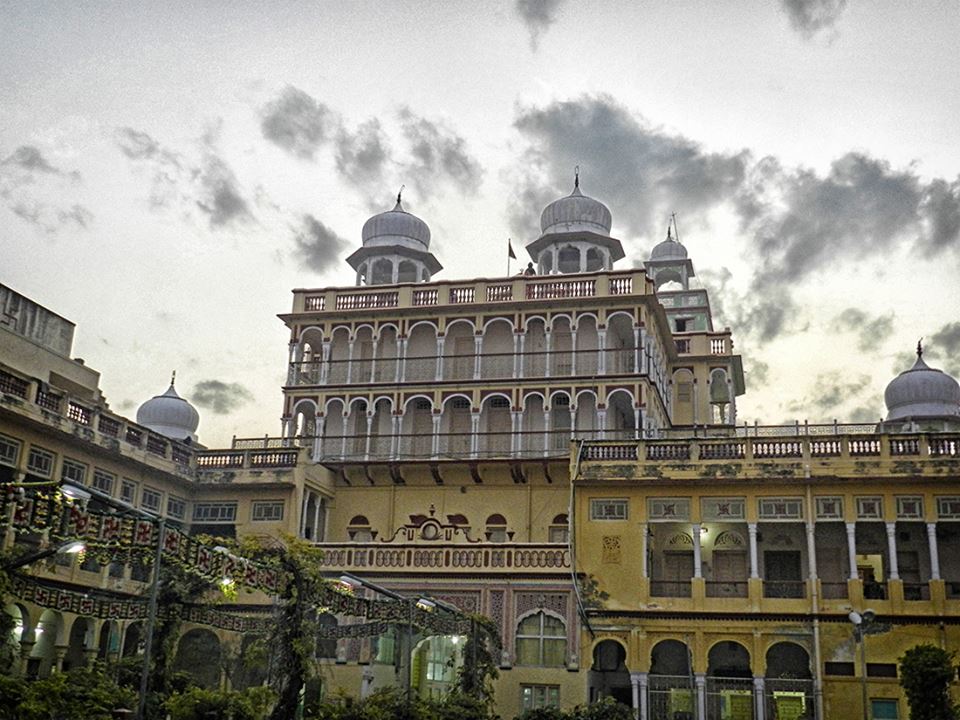 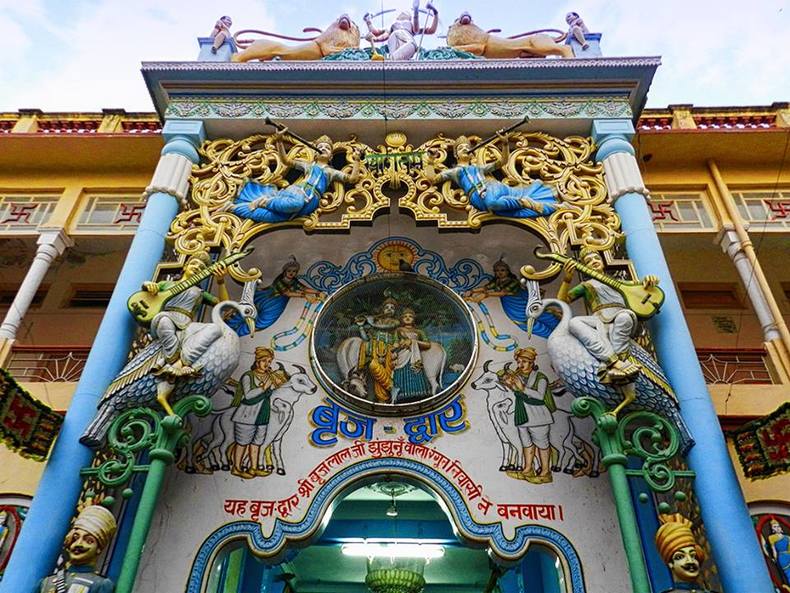 We got our shoes and were leaving when the man at the front gate stopped us and asked us where we were from. I told him from the United States. He asked if we had seen the singing fountains. We said no, so he took us back to see them. The water danced to the music, and different colored lights lit up the streams. The man asked why I was not taking pictures of it. I said, “You can take pictures here?,” since I had seen signs indicating no photos were allowed in the inner area – I thought that included the fountains. He said I could, so I began filming the fountain show. The guard (with his automatic machine gun) came up behind me, and started yelling at me, but the man shooed him away. 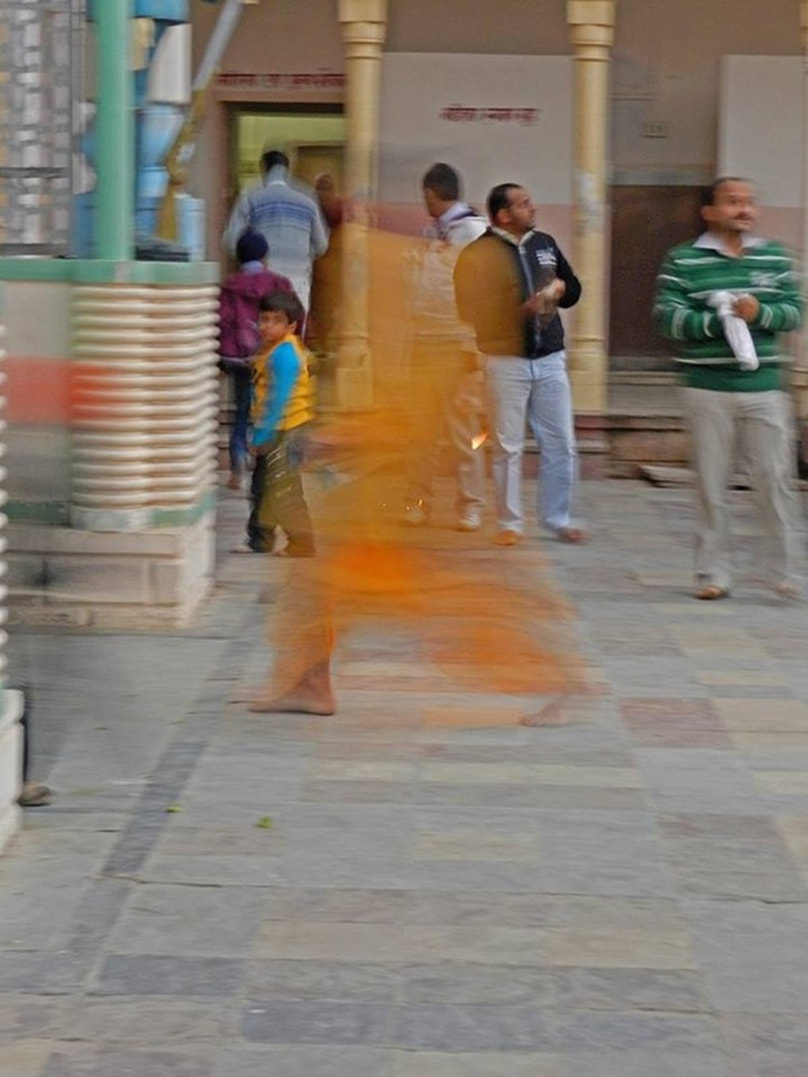 (Monk at Rani Sati temple.) After watching and filming a while, we gathered our shoes once again and left the temple; outside we met Hukam and got back in the car. It was a mad drive out of the town in the dark, twisting alleyways, and still carts and donkeys and people rushing all about.

We drove down the one lane road for a bit, then arrived at our haveli for the night –
(Gwala was the name of our room - it means 'a sound cows make' or something to do with cows (?) ) – it was breathtaking. 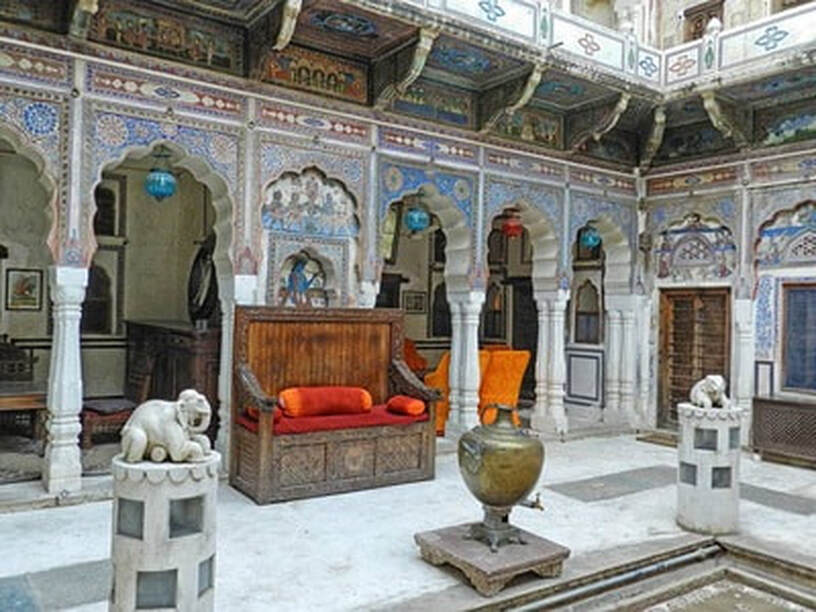 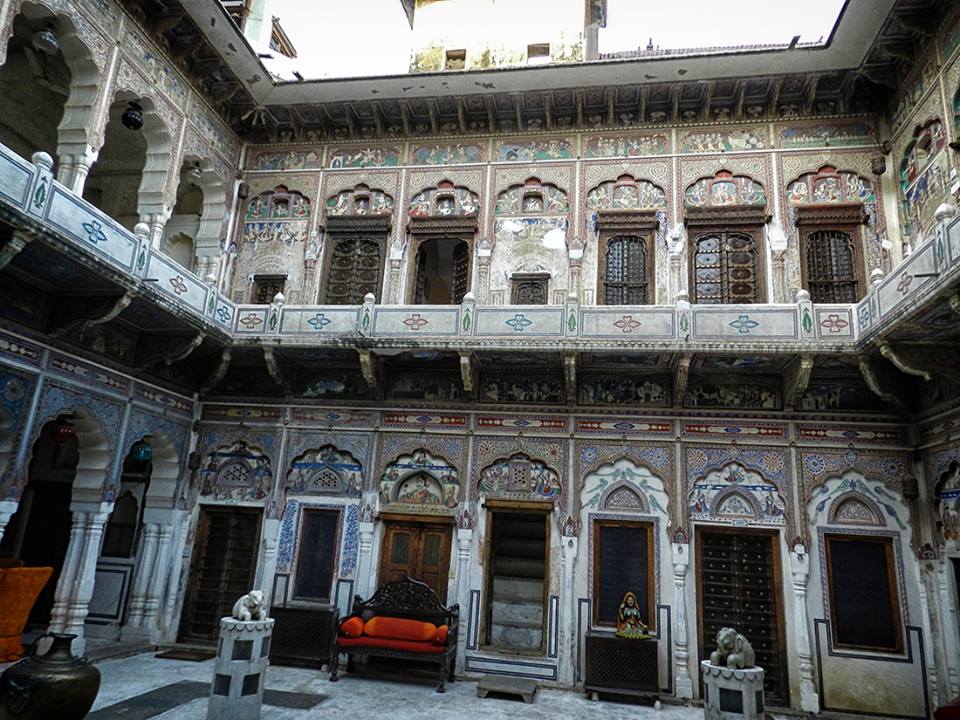 The inner area is open to the sky – the rooms have shutters on the windows – no glass on them, though, so it was quite cold. We got wool blankets, and they brought hot water bottles for us. The water was so hot, it almost burned against the skin – it was still warm at 5 am. So nice to sleep with at my feet, though. I fell asleep fairly quickly – Mike stayed awake and had some beer. 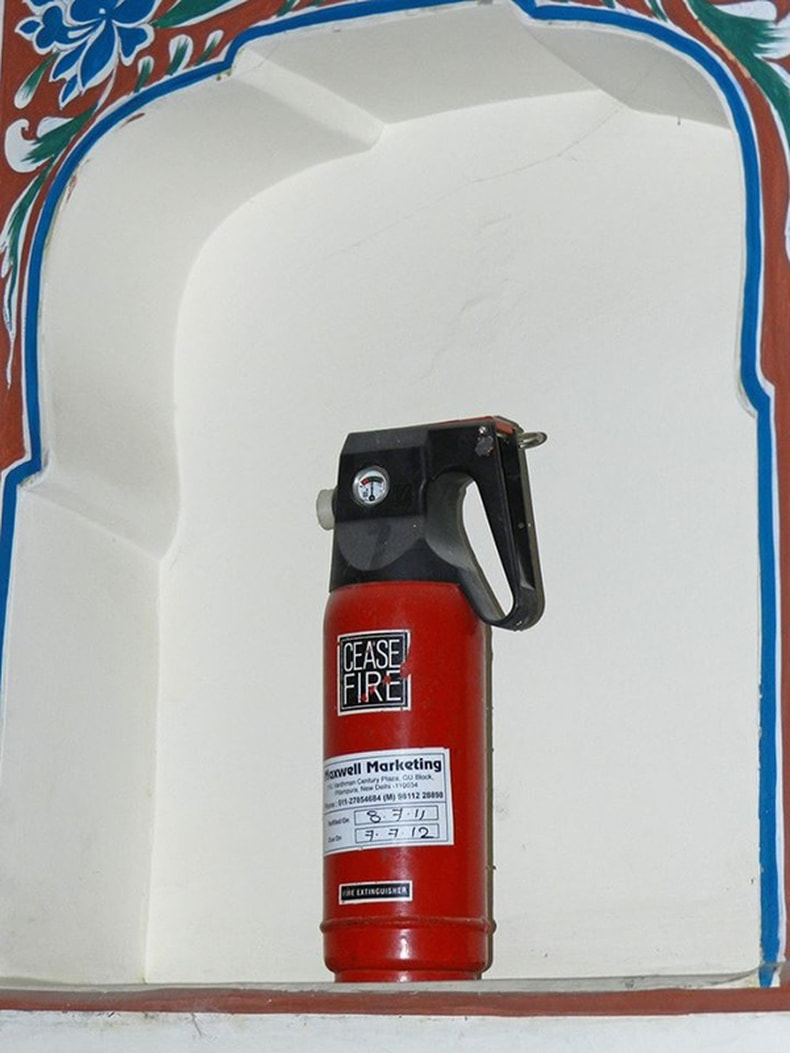 (In case our room caught fire - luckily there was a CEASE FIRE!!! ) 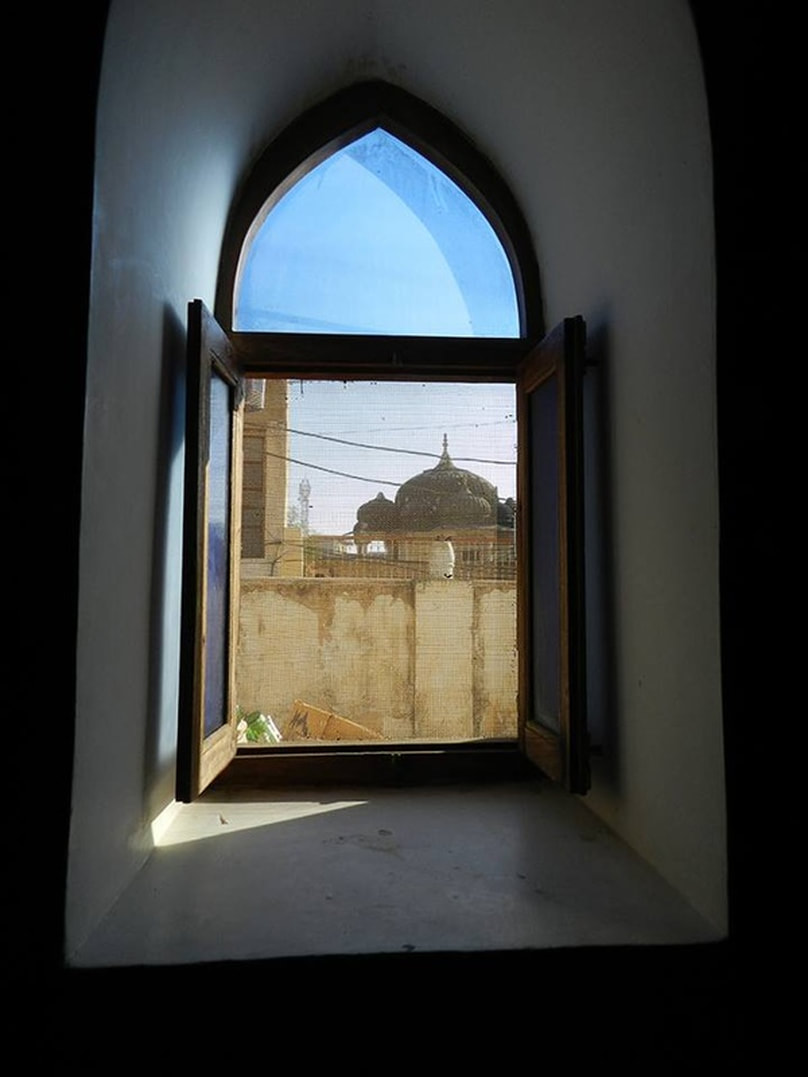 (The view out the bathroom window... 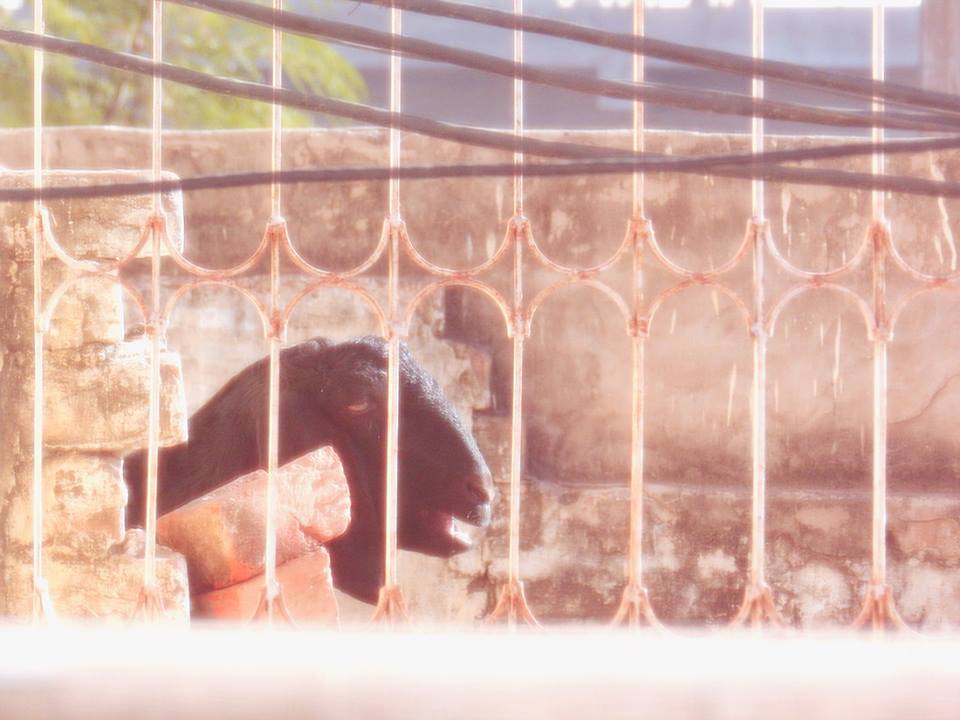