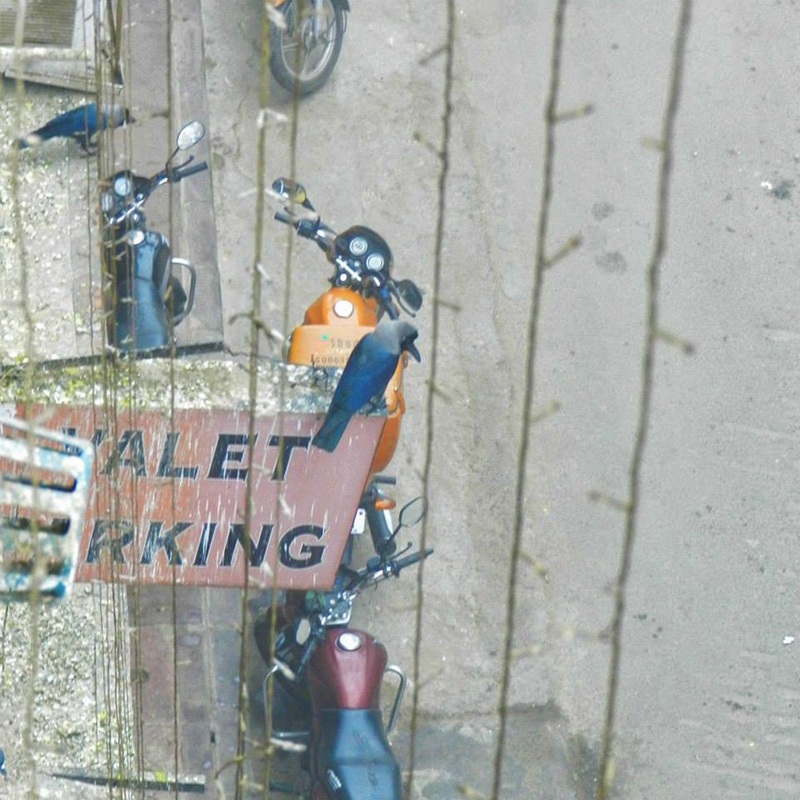 The noise level rose from around 5 am on – the horns grew more frequent, as did the vehicles passing. In addition were the loud bird caws, dogs barking, people talking, music playing, babies crying, children yelling. It’s easy to wake up early here – and alarm clocks are not really necessary – all you need is right outside your window.
The shower was hot, and the bed was soft – what more can you ask for? I sat in the window a while after I stretched a bit and took some photos. Soon it was time to head downstairs to meet with the owner of the tour company to pay him and finalize our arrangements.
We paid, and he made train reservations for our last tour day to leave Agra for Varanasi. I got rid of all my traveler’s checks with him – I’m glad – I don’t know why, but they were making me nervous. 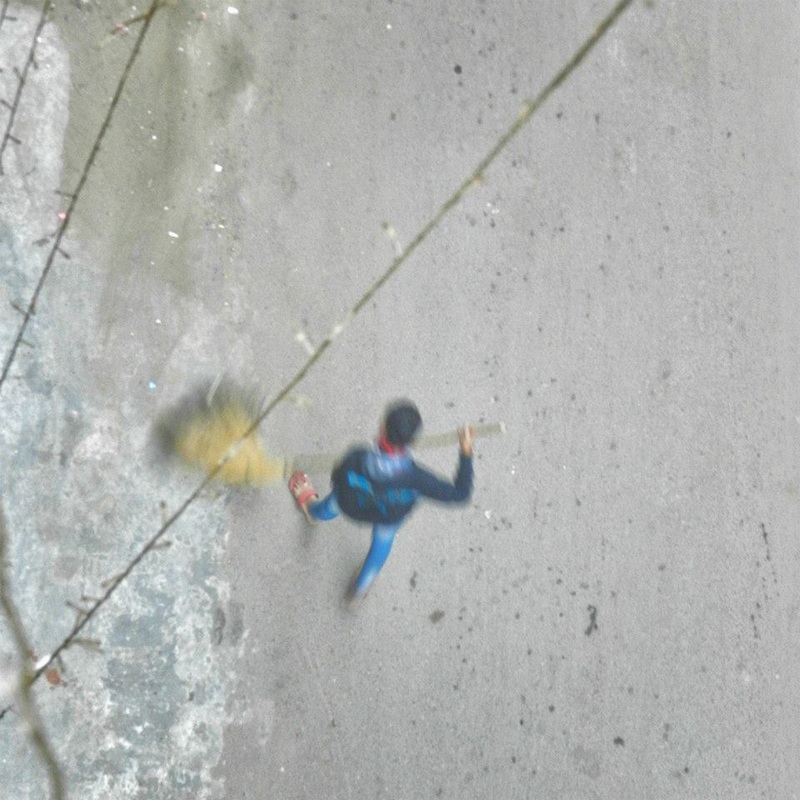 Prem took us on our tour of Delhi.

We drove by Hanuman’s temple again – 108 feet tall! - and this time stopped so I could take a photo. It was from across the street, and the train tracks cut Hanuman in half, though. I don’t know it did it justice. An awesome structure, anyway. 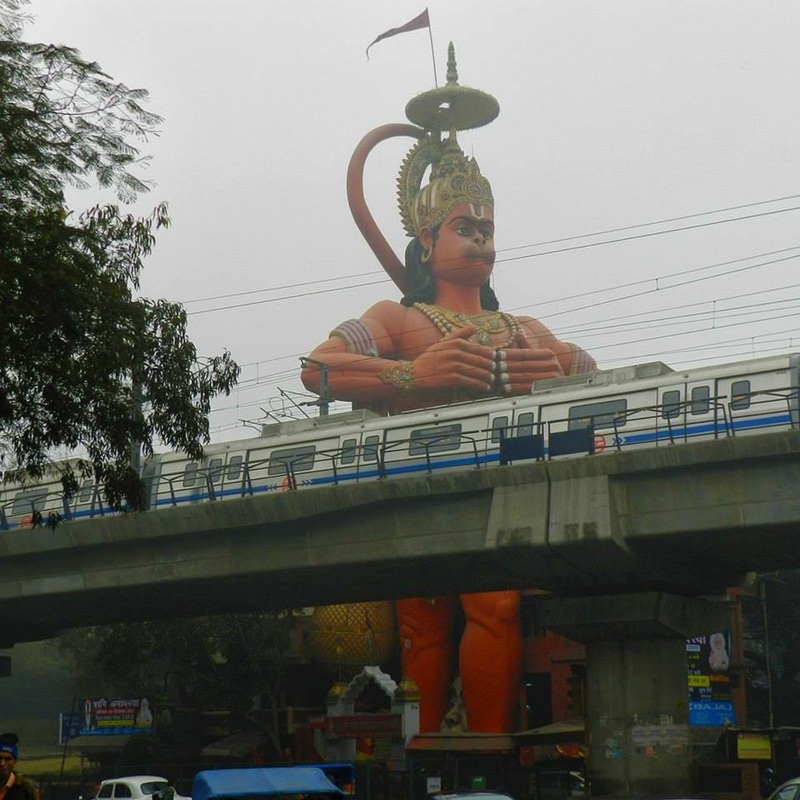 We moved on to Lakshmi’s temple. A fairly large complex with marble floors and many statues. We were allowed to take photos outside, but a guard locked up our phone and camera in the shoe room.
The marble was slightly cold under my feet. We looked at many rooms with statues of various Gods around with flowers and things at their feet. Prem prayed and bowed in front of each one we visited, and touched the feet of most in reach. There were also trays of pigments below many of the statues, and the priests working behind the counter would dot your forehead. Mike and Prem talked about the Gita and other texts - I listened. One of the last rooms we visited was the room of mirrors. It had a deity in the center and mirrors all around – to remind us that we are all one, and God is everywhere, Prem said. It was beautiful. We left and ignored the people pushing things for sale in our faces and windows. Mike took my photo by one of the elephant statues in the courtyard. 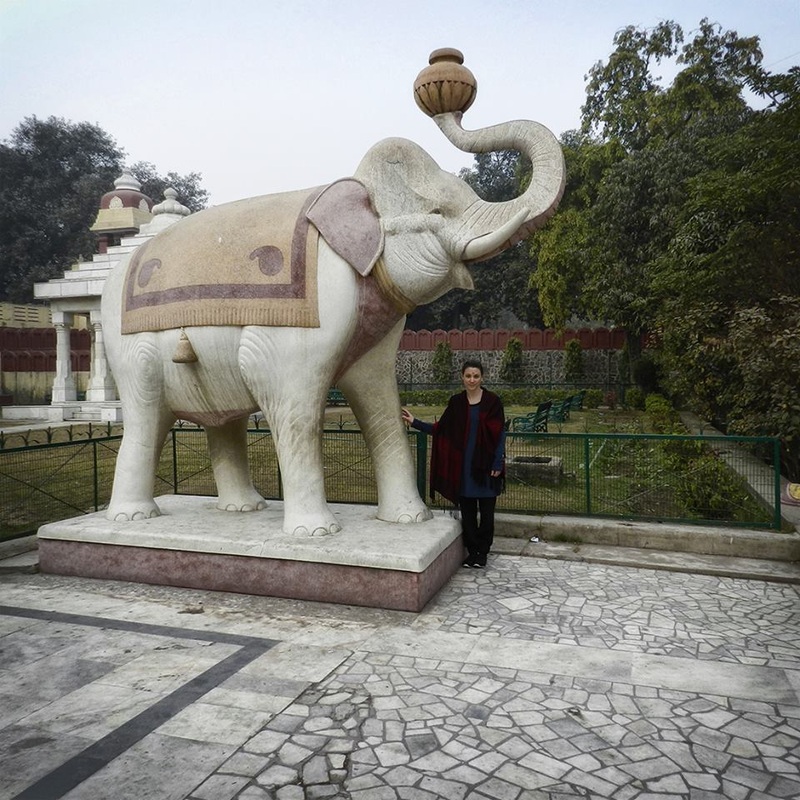 We visited another shrine – the priest gave us sugar candy from a bowl. It looked like mini-popcorn, little white puffs. 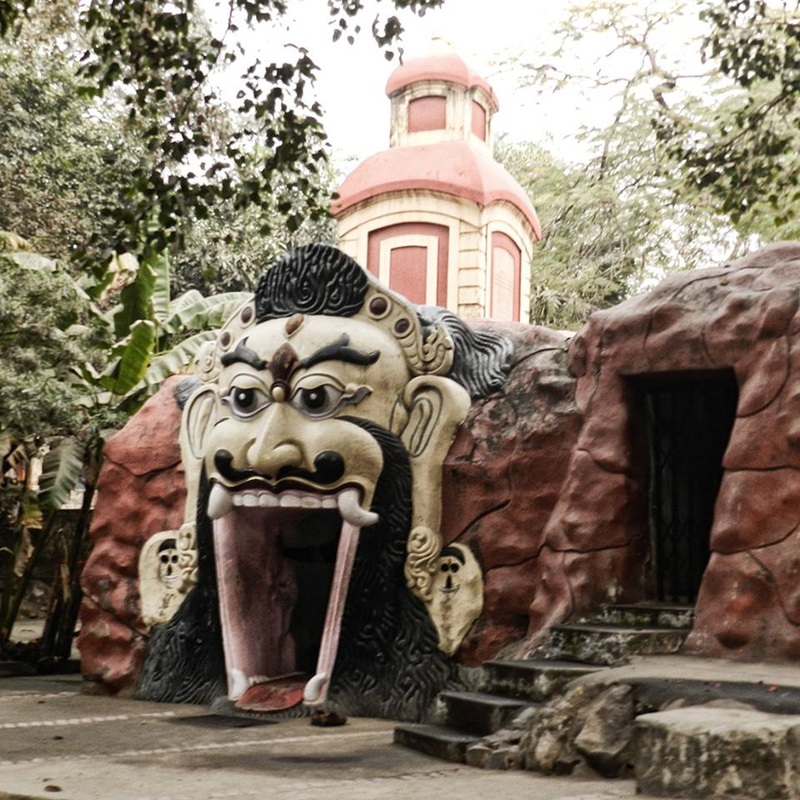 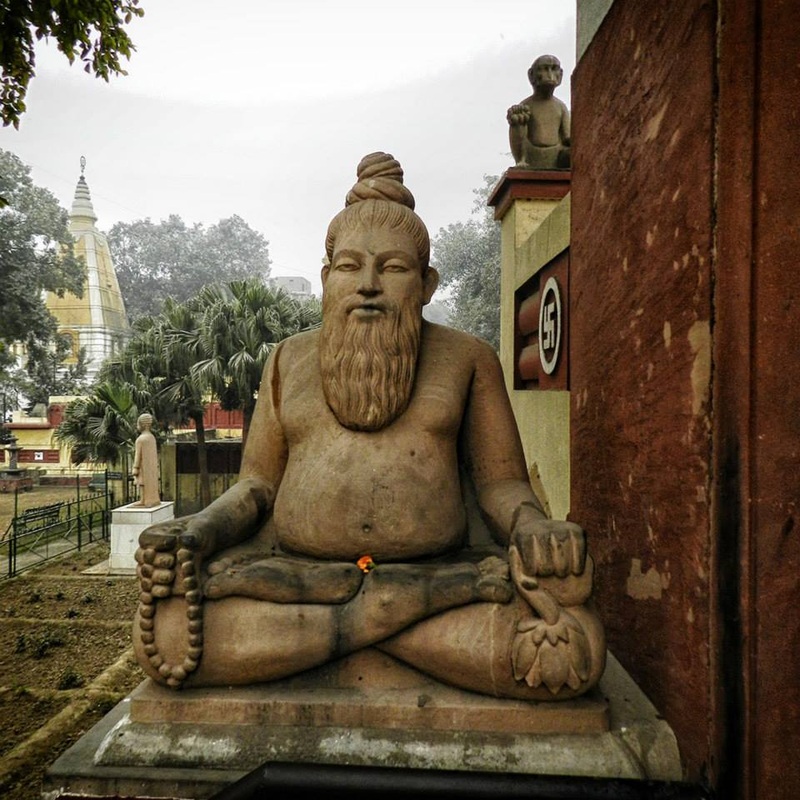 We then were dropped off at Qutub Minar – a huge complex of temples and ruins with a giant tower in the middle. Built by the Mughals. There were many people there. The architecture was stunning – the details, gorgeous. 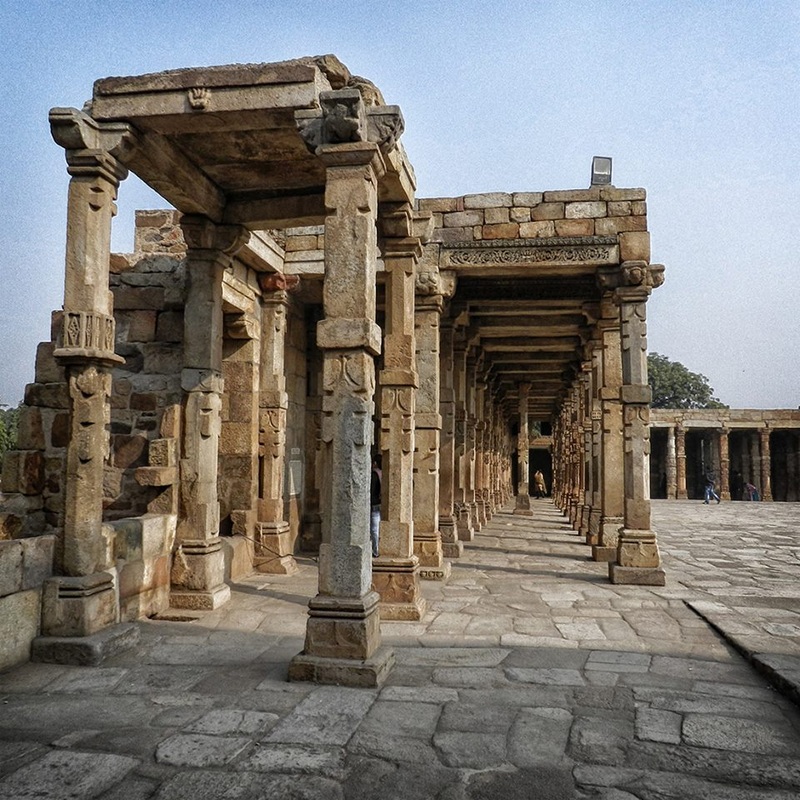 We then headed off to the Lotus temple. It is a massive structure reminiscent of the Sydney opera house – just in a lotus shape. 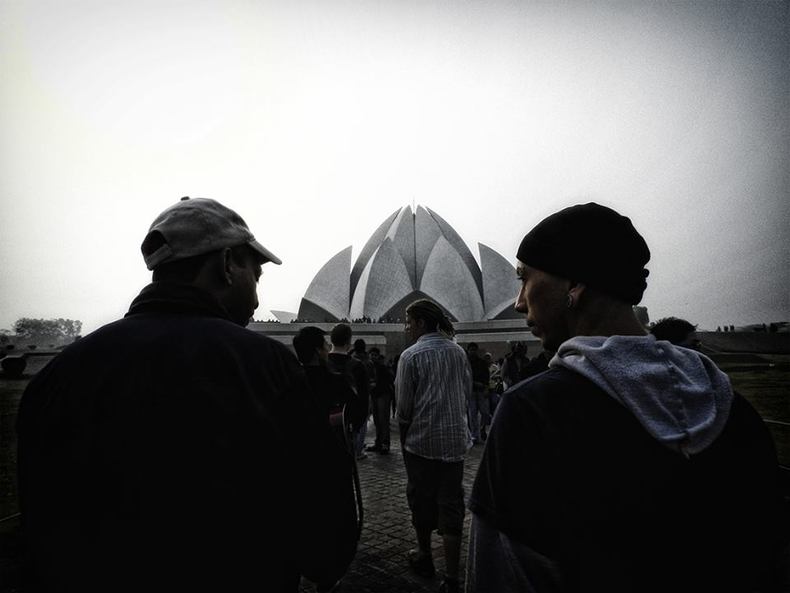 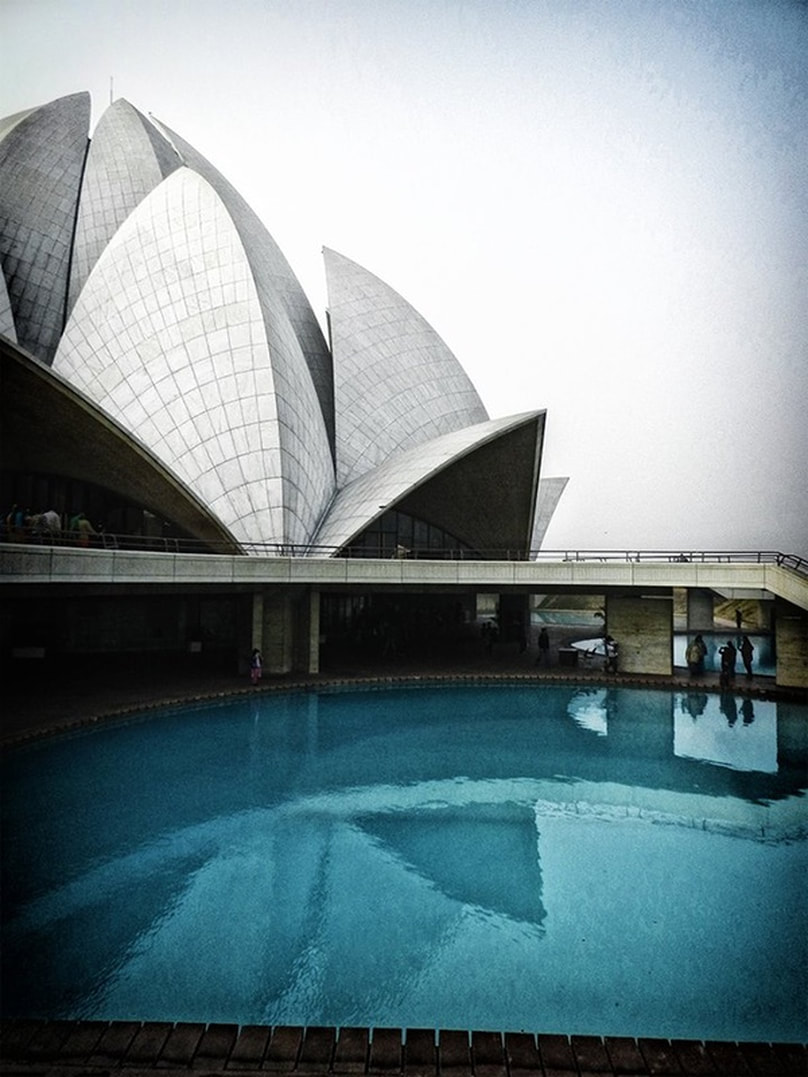 There were clear blue pools surrounding it, and gardens outside. 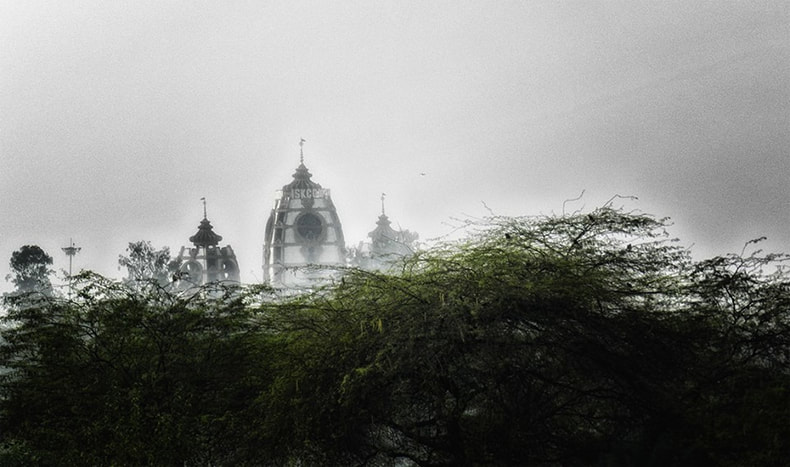 It was a bit of a walk to the temple – nothing major, though, and many people.
We removed our shoes closer to the temple, and placed them into a woven plastic sack that was checked in. Up closer still, all cameras and cell phones were to be shut off. We were lined up into regiments, then entered the temple after a brief introduction about the place in English and Hindi. There were wooden benches with marble seats inside. The acoustics were amazing. A prayer session was gong on – a woman was singing and the sound was amazing and so beautiful.
…
Each petal going up to the roof outside had a hollow chamber inside the temple, and joined the walls in a diamond-like shape. The lines were very clean and modern looking – definitely a newer construction. 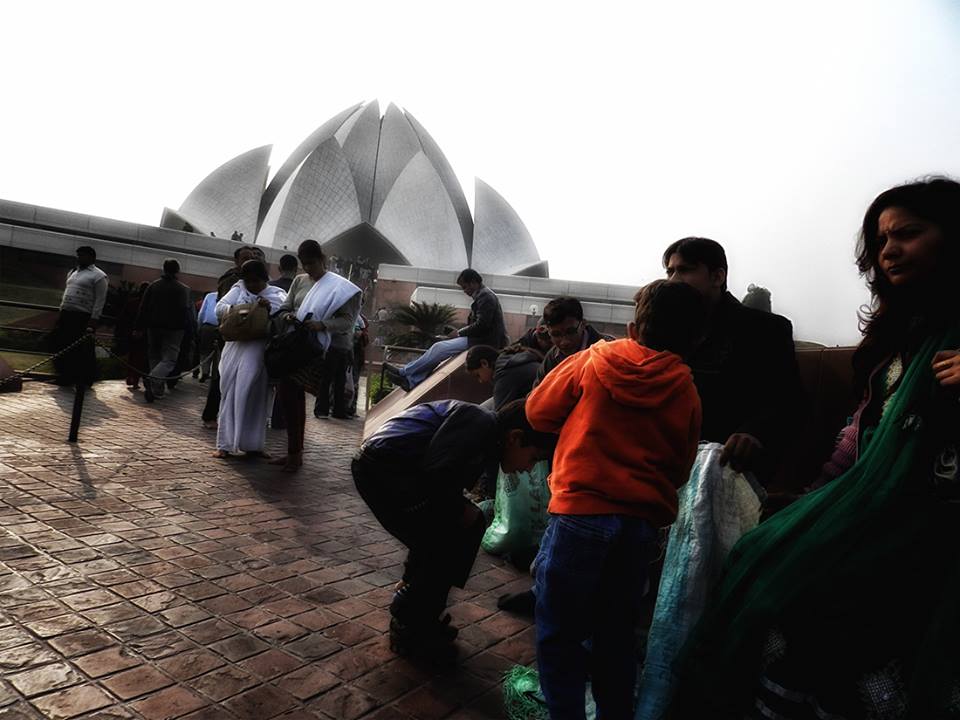 We stopped by the gate of India – lots of little things for sale. The people were quick to try and grab your attention with little toys and things – the Indian helicopter flew very high – another gentleman had little plastic dogs on an air line “leash”. They would squeak them incessantly when you came near with the little push button at the hand end of the leash. They would squeak and jump with the air forced through the tube. 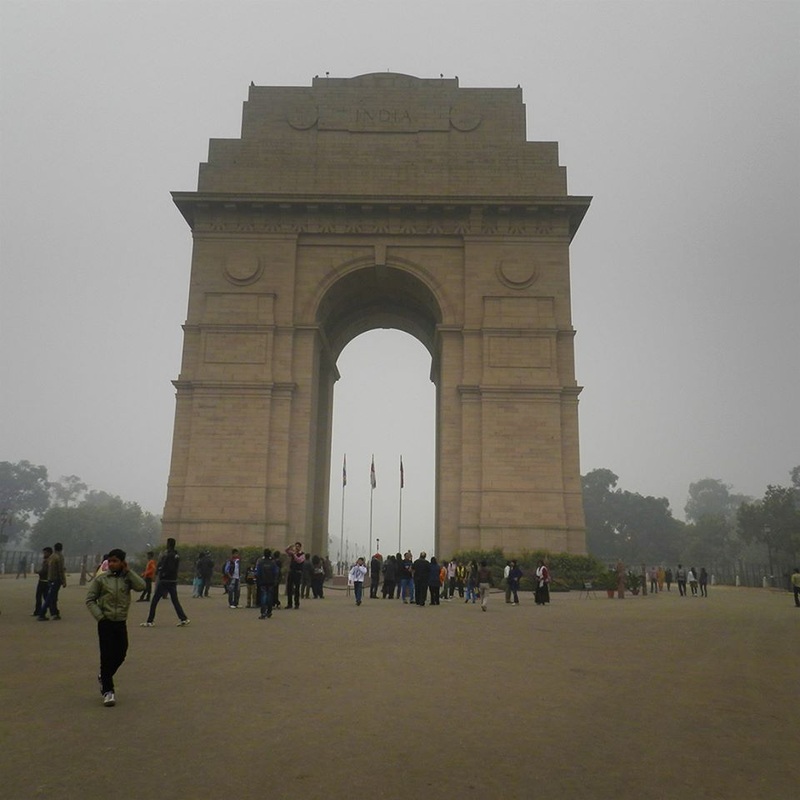 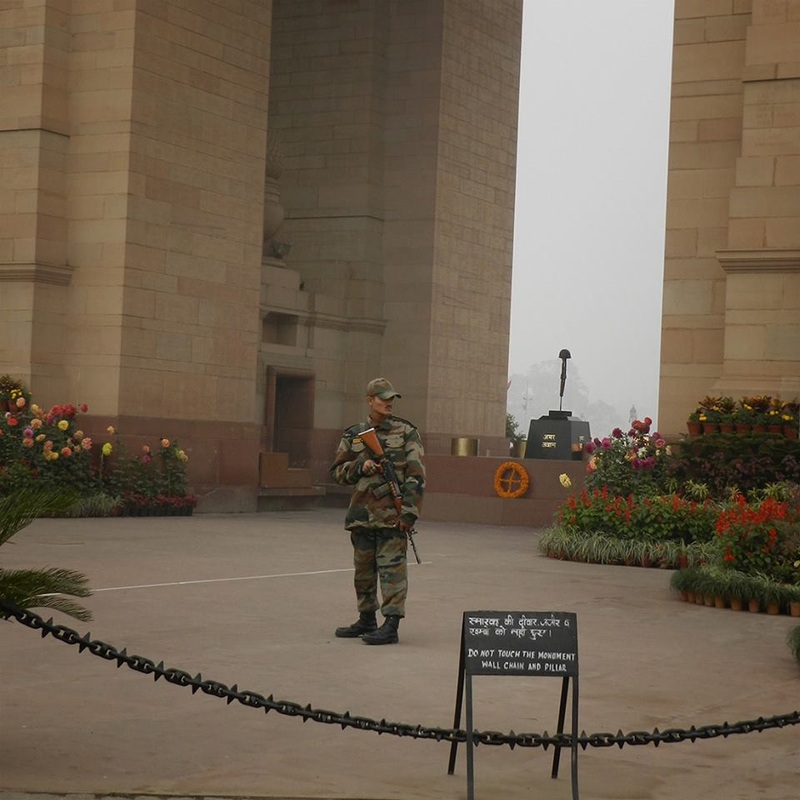 People were also selling food around – chickpeas and lime, chai, etc. We didn’t buy anything. People were burning plastic bags for fires to warm their hands. The gate had names of people who died in the Afghan war.
Along the road to our various destinations, there were many sights to be seen, as well. Beggar children dressed up and did dances; there were many families who lived on the medians between the roads.

Many interesting shops were along the roads – it seems they were just about anywhere there was space. Some that I remember were the “Worlds Pet Shop,” where cages with rabbits, birds were set up in stacks outside, and the Nikon store, with photos of scantily clad women, some with cameras, on the windows. 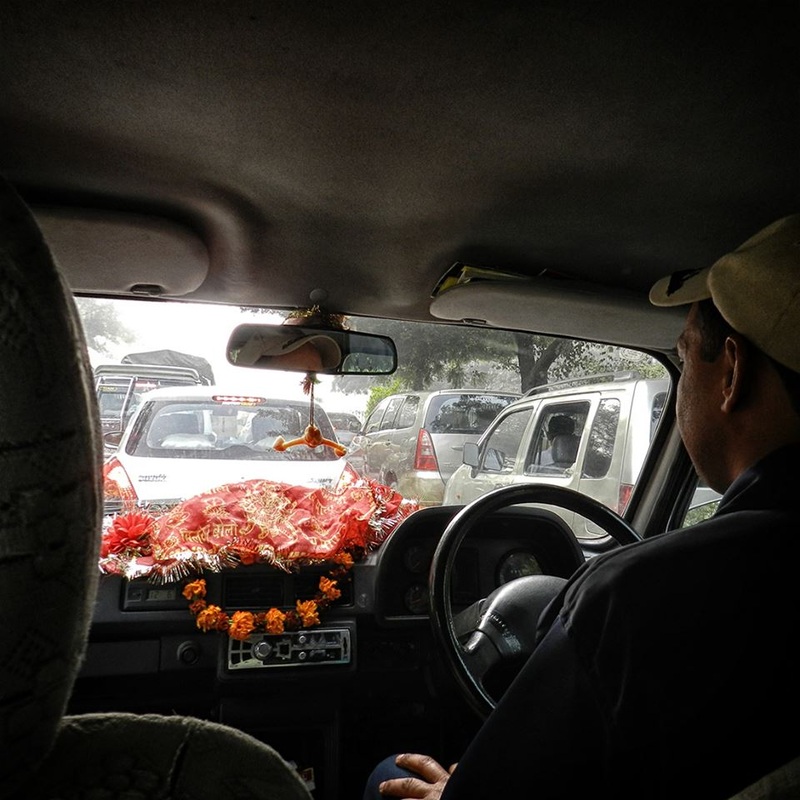 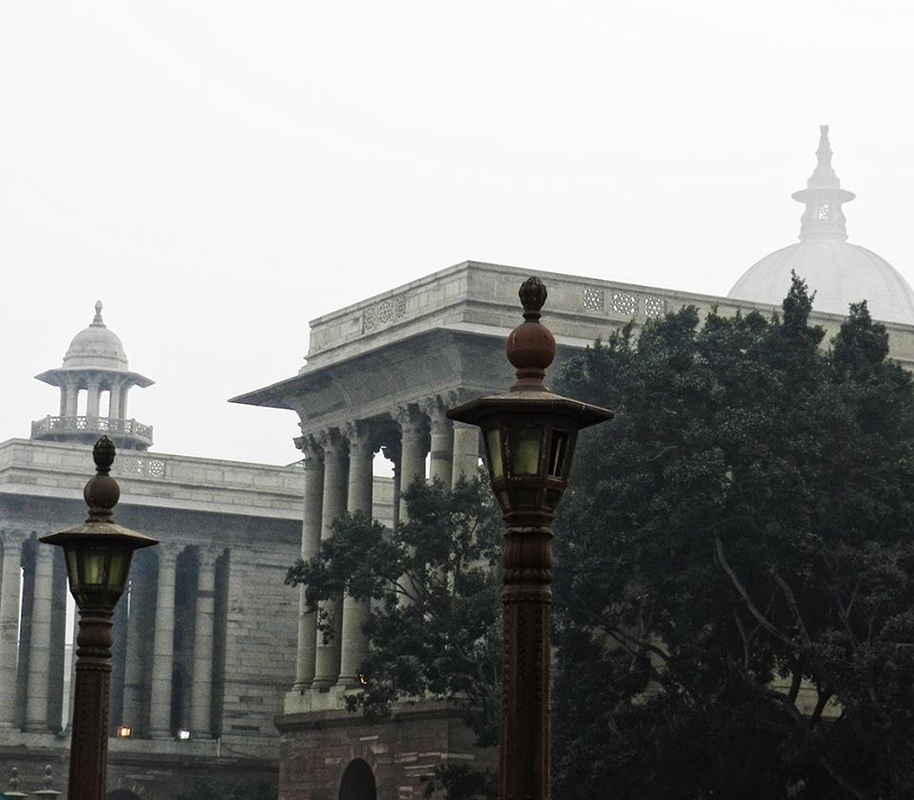 We also visited the president’s house.
A huge place. Many armed guards. 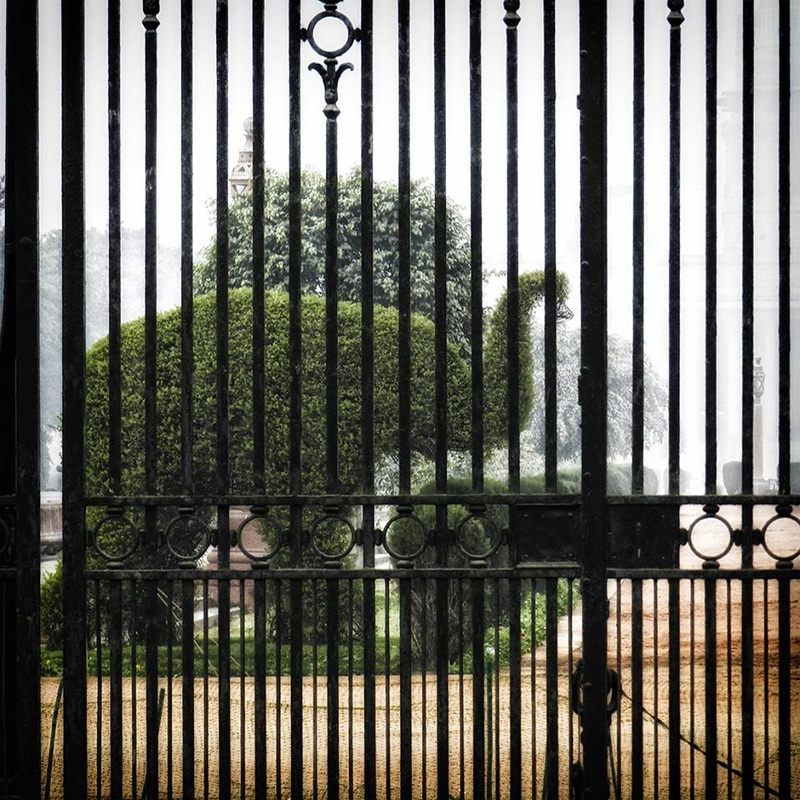 There were some nice gardens, too. The elephant topiary was cool. 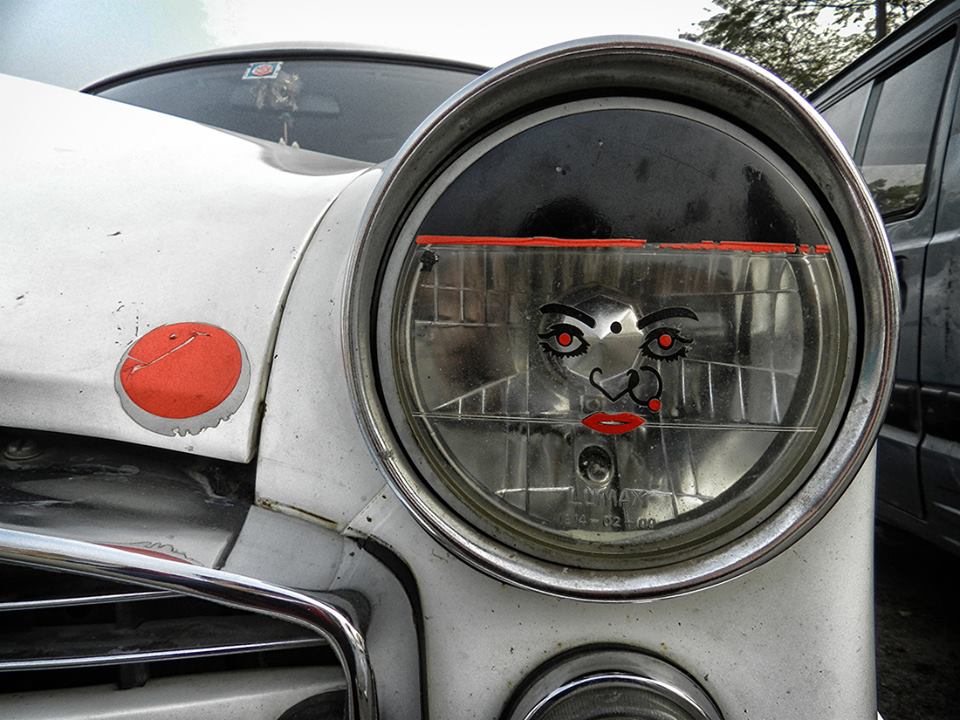 Many Ambassador cars there – they are used by all the Parliament, and not for common people, but V.I.P.s, said Prem. I like our Ambassador. 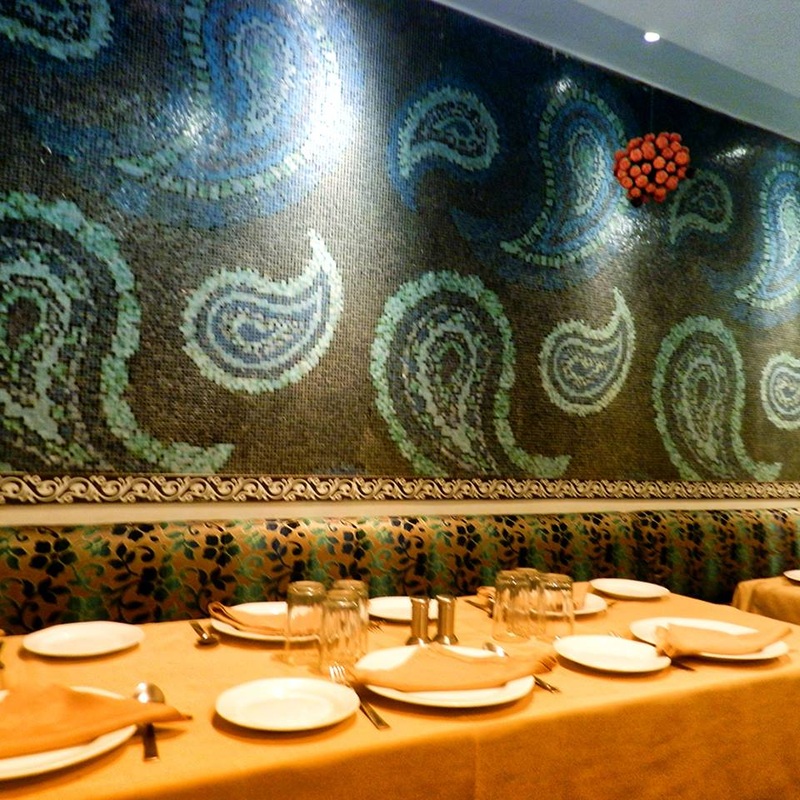 We had lunch at a nice Indian restaurant. The food was good, but got a bit too spicy at the end (we had our first introduction to these huge 'string beans' - HOT chilies that grew on trees (?); they had a creeping heat, and we both ate most of one each before we realized they were NOT green beans...), and my stomach was still adjusting, so I didn’t eat too much.
It was decorated really nicely. 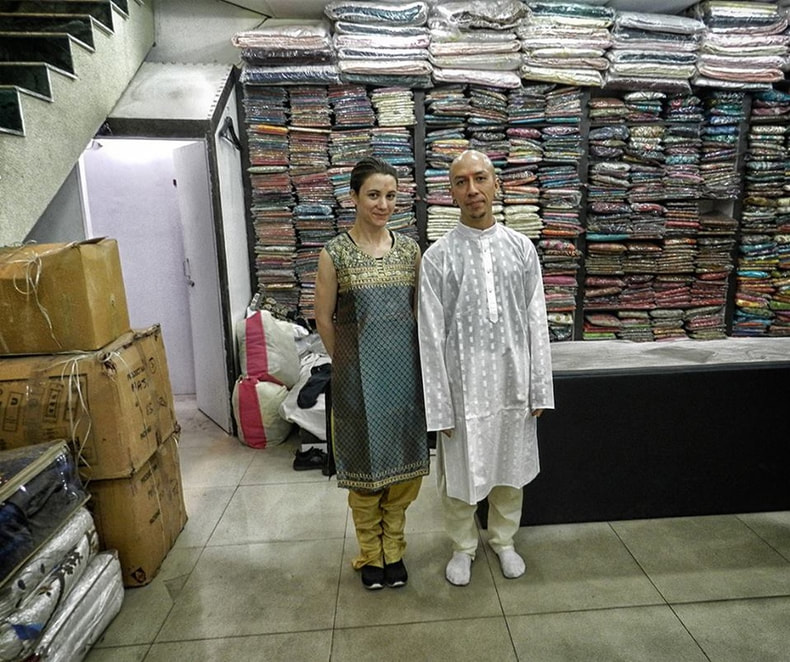 We went to the government store to buy some clothes. We got a few more things, and some gifts, as well. We were there for a while – there were cushioned seats, and the workers would take out just about every option in every color available and lay it in front of you for examination. There were three or four floors with different rooms, and beautiful things from all around the country. The workers served us chai in little cups – it was tasty. I was worn out after this shopping experience, so we set out to go back to the hotel. It was about 7 pm. 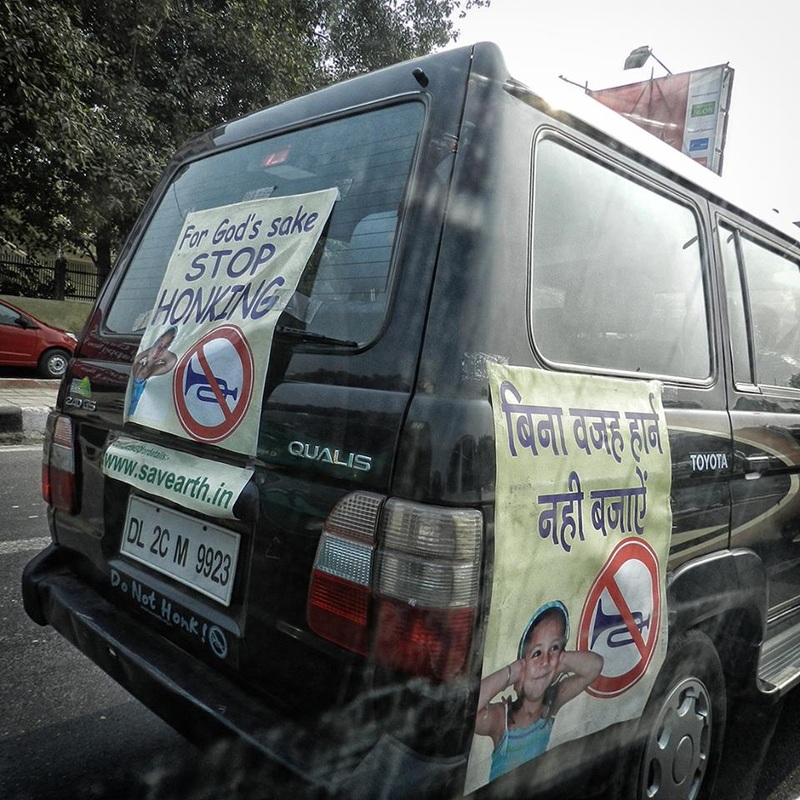 The traffic was terrible on the way back – very crowded. A motorcyclist ran into our car as he zipped between cars. Prem was angry, and honked the horn at him. The horn got honked a bit on that trip, which was unusual, since Prem said he tries to only honk the horn when necessary. We finally got to the hotel, and Prem parked in front of the hotel. The street was crowded, and other cars couldn’t get around. A man in a turban got out of his car and started yelling at Prem. It was a mess. I took our bags up to the room, and Prem moved his car. He came up to the room with Mike to say goodbye. We will have a different driver for the rest of our tour.
…
Prem seemed very nice. ('Prem' means 'love'.) He had much information for us, and tips for getting along well in India. He said we have to come back, and next time he would take us to see his village and through the Himalayas. He hugged us goodbye, and instructed us to call him if we had any problems. He assured us our new driver was nice – they are from the same village – and asked us to keep in touch. We wrote in his book, and gave him our email addresses. He asked us to be invited to our Indian wedding, when we come back.

I washed my clothes in the sink and went to bed.