A Flower in the Hand: Unholy Men in a Holy City... 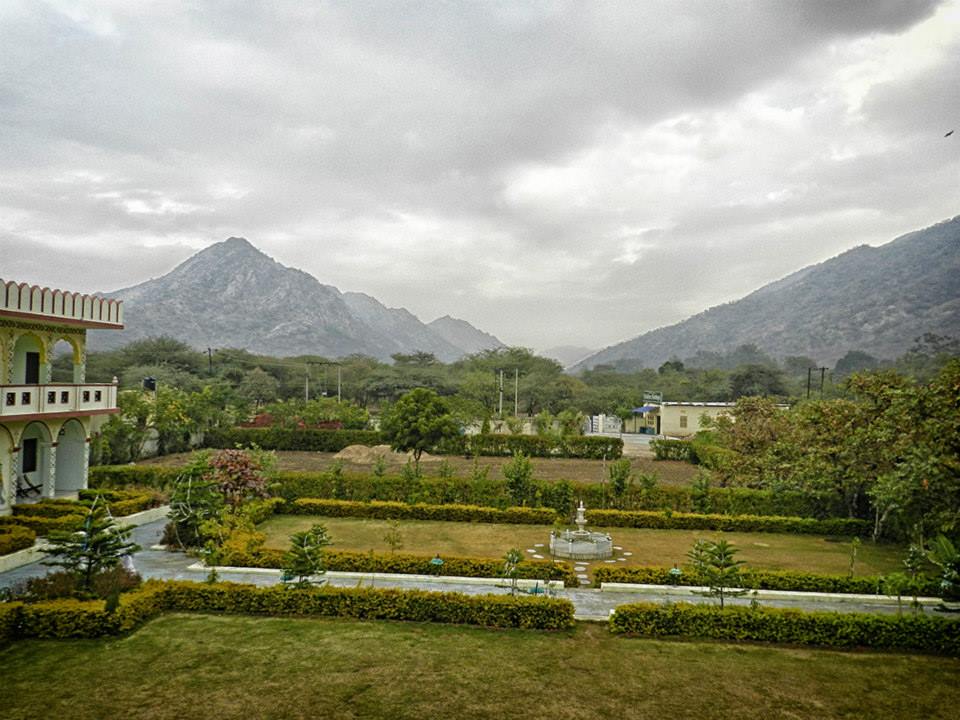 We went on a walking tour of Pushkar with our guide – Giri Raja – which means ‘Mountain King’. He was very nice and knowledgeable. 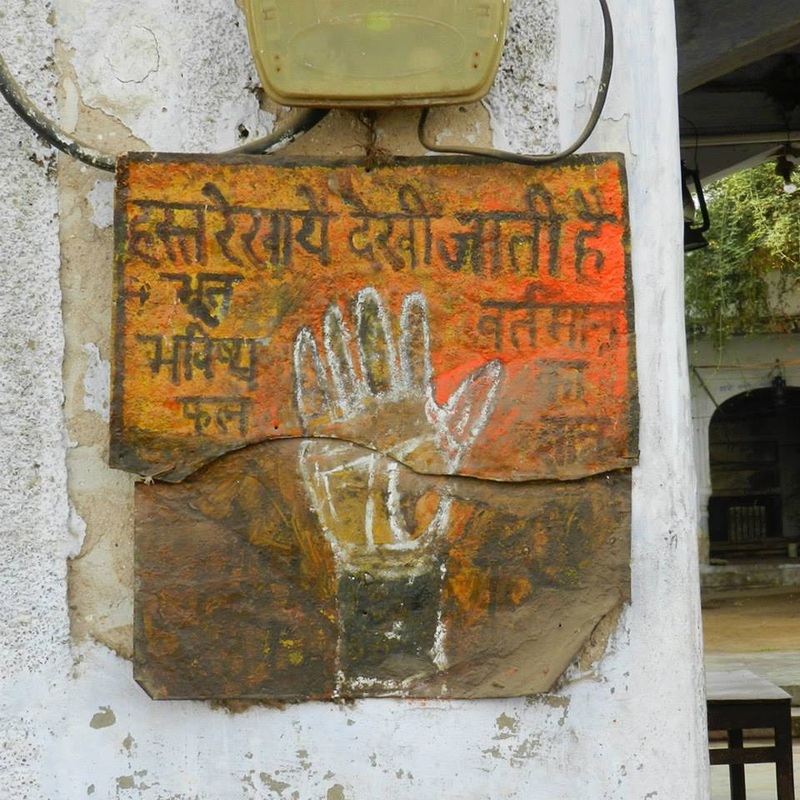 He told us of the history of Pushkar – as well as what the name means: Push: flower, kar: hand – the sacred lake at the center of town is where Lord Brahma came, and gave lotus flowers. 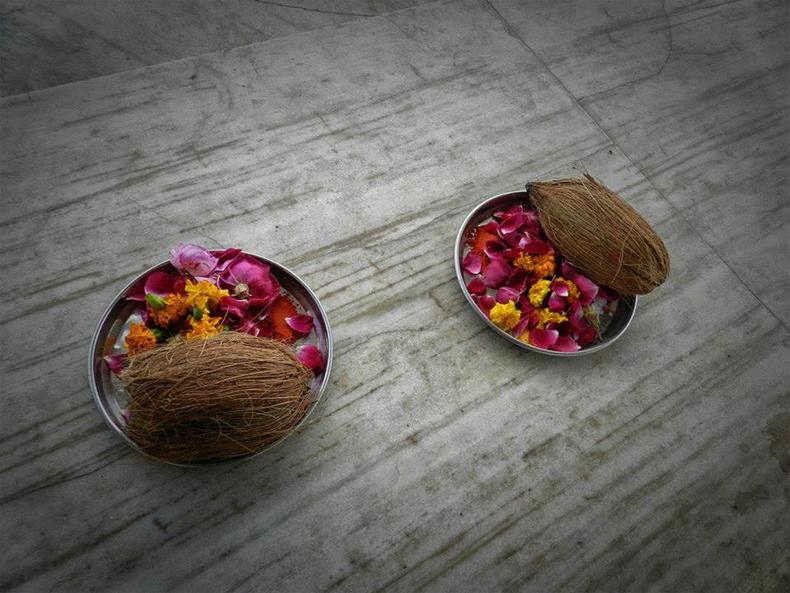 People go to put flowers in the water and to be purified and blessed.

We walked and saw many small shops, and daytime life around Pushkar.
We took many pictures on our walk. 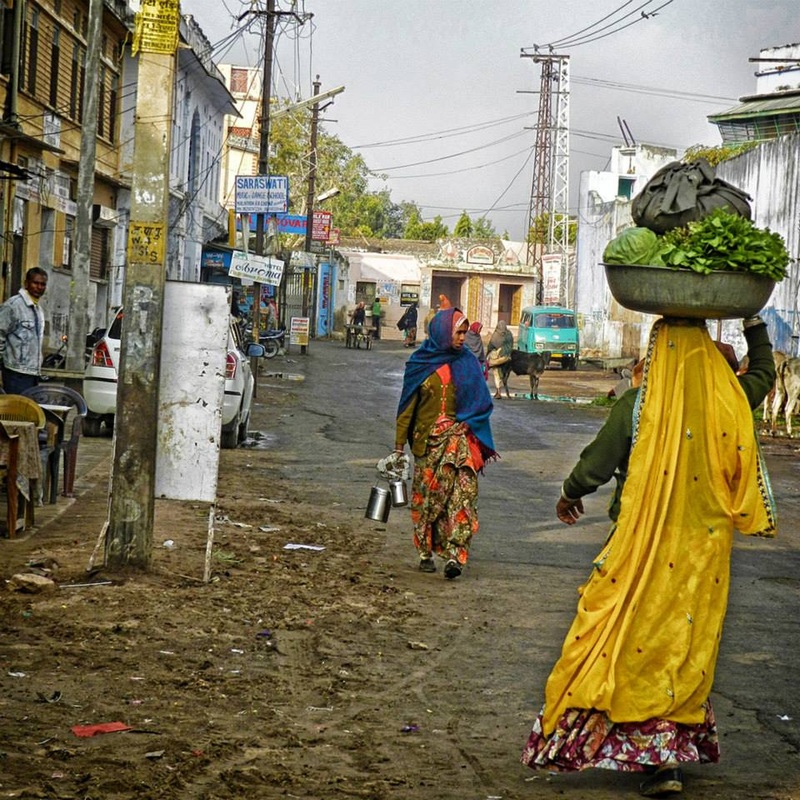 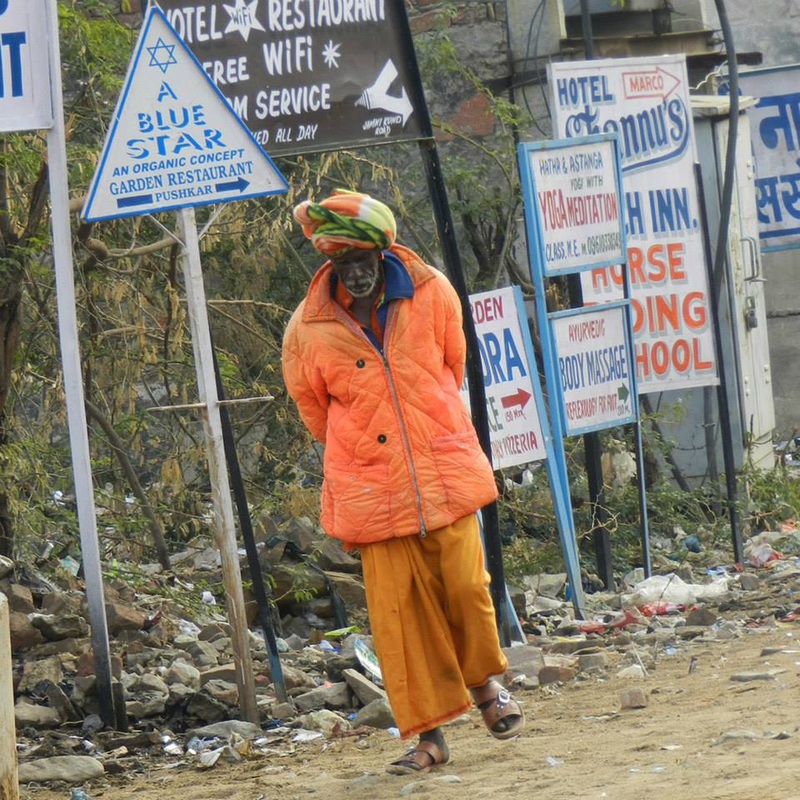 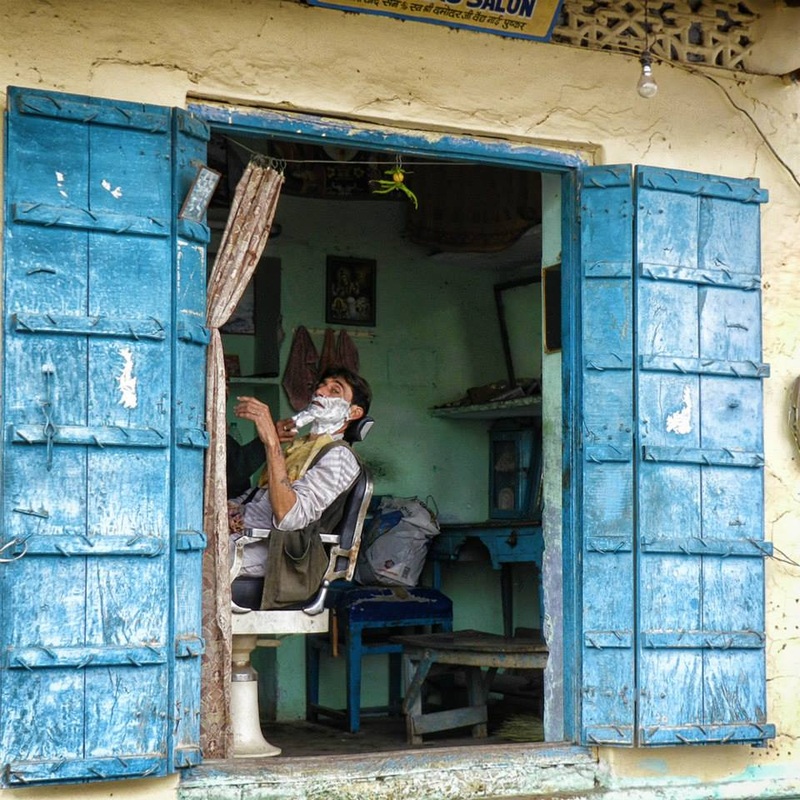 (Not a monkey)
At one point we saw a man being shaved at a barber – all three of us with cameras – me, Sandy, and Mary, took photos of the man. He started yelling at us that he was “not a monkey”. It was a bit of a scene. Our guide apologized and said he had not told us to take photos, and that there was no problem.
We moved on. 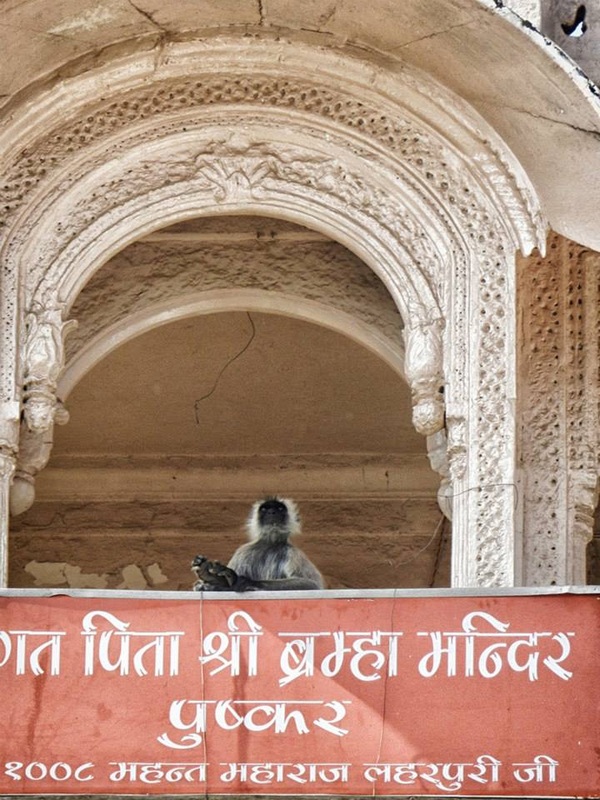 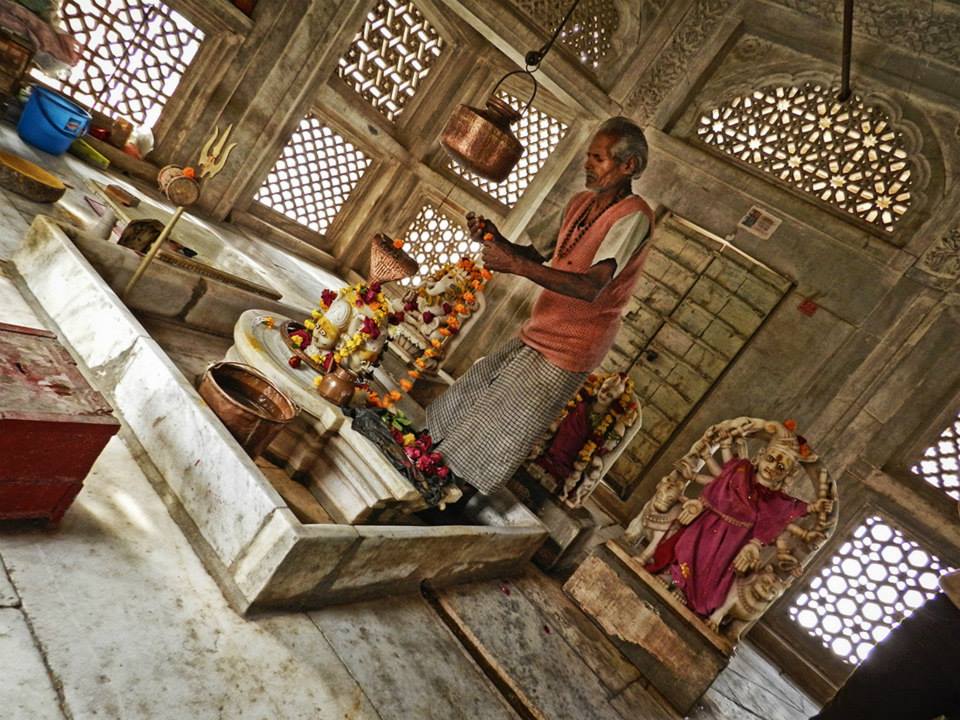 We went to a small temple, and Mr. Giri gave us a bit of information on the Hindu mythology.
We then moved on to the temple dedicated to Brahma – the “only one” in India, after we stopped to buy some mala beads for Mike for his birthday ... 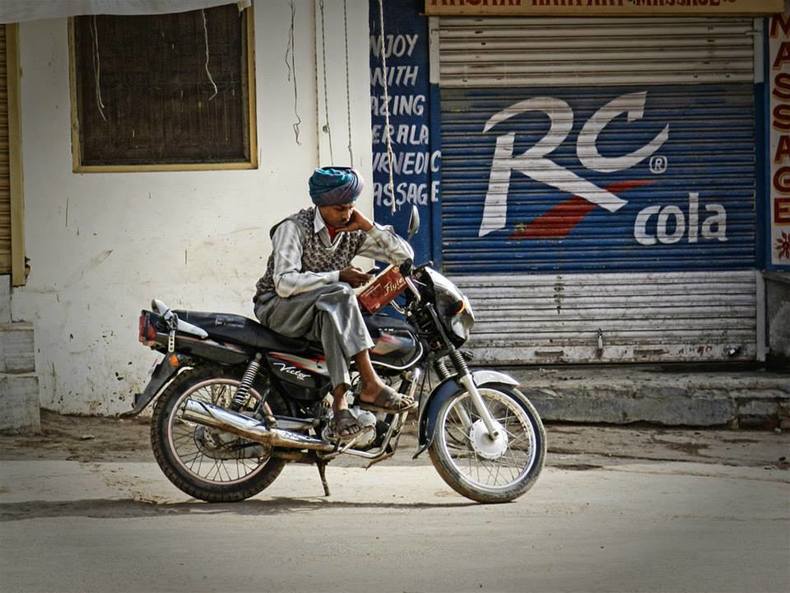 ...and some rose oil – Pushkar is known for its roses, and I like to get a little something from each town, especially if it is something they are known for. 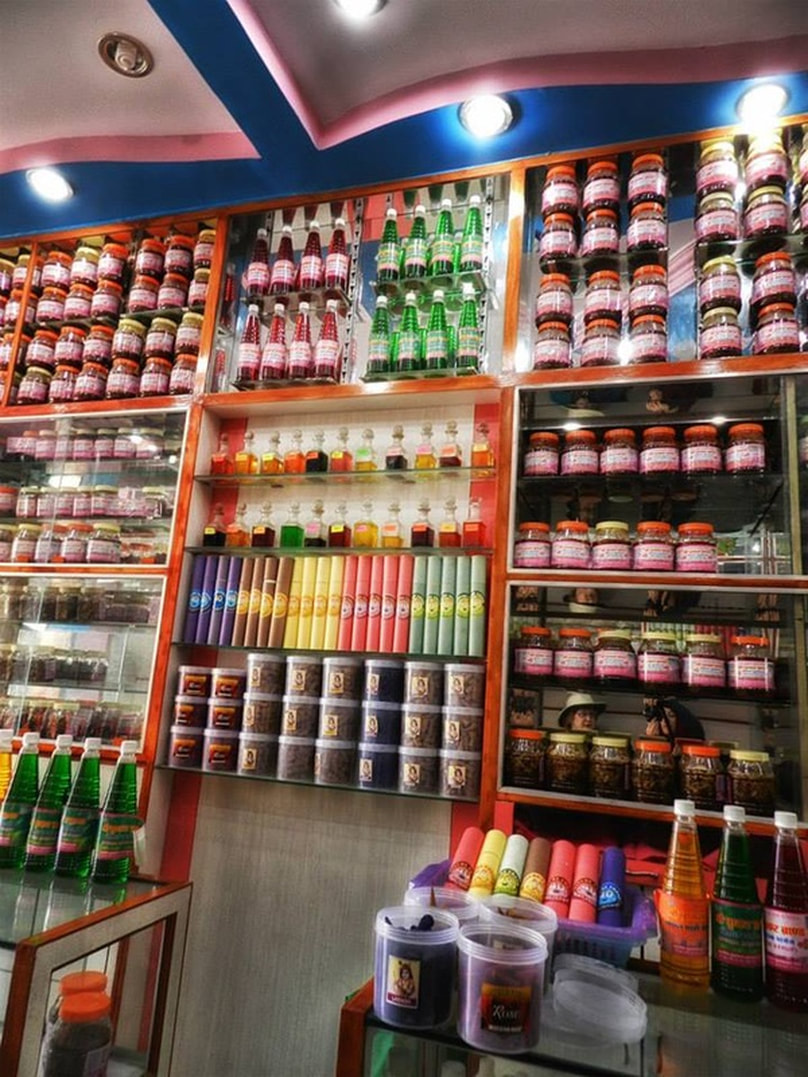 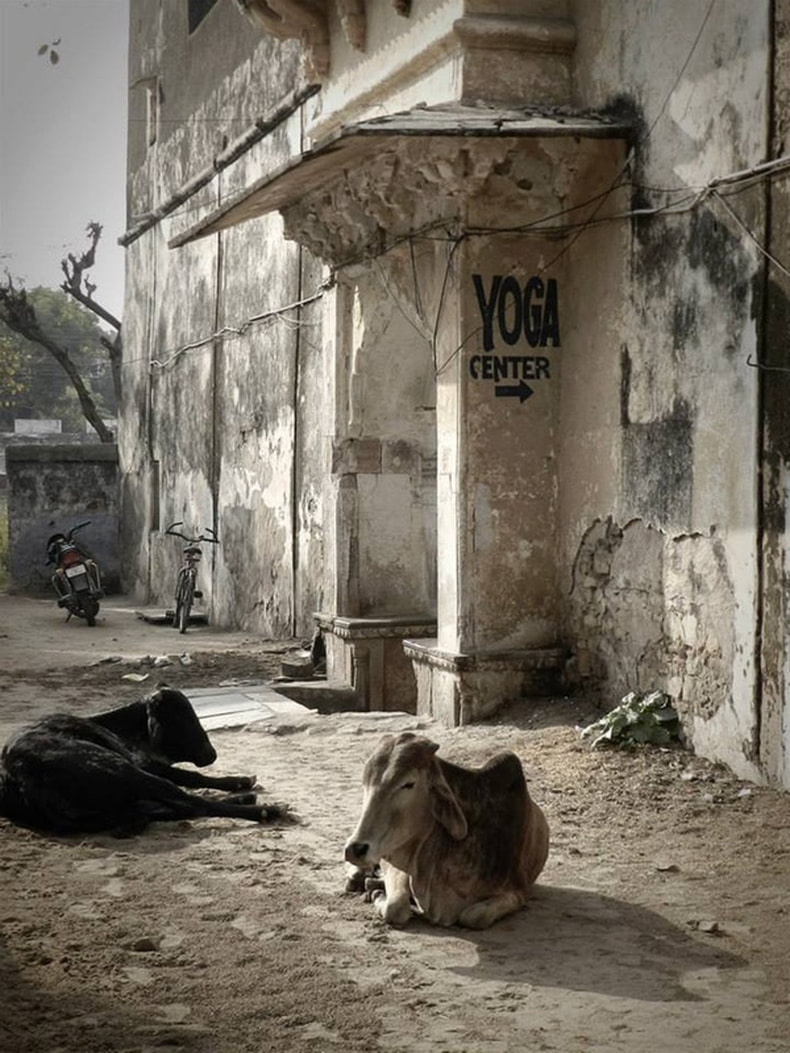 We saw fields of roses throughout the town. It is rather small – about 25 thousand people, but fairly busy – and lots of hippies, since marijuana is popular with many of the local priests, and apparently easy for hippies to get, too. Mr. Giri said the guy yelling at the barbershop in Hindi was a hippie… 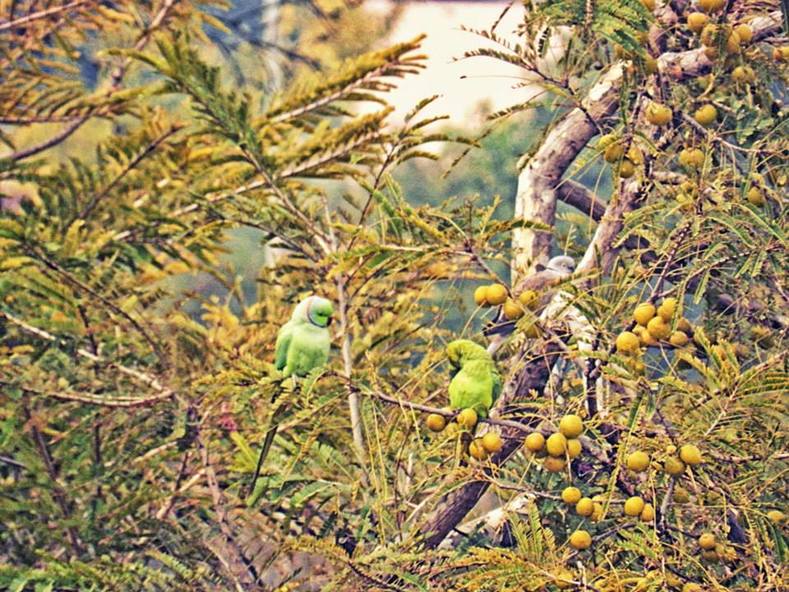 The Brahma temple was beautiful. We were not allowed our cameras or bags, so Mr. Giri got lockers for us. He showed us the plastic mala beads at the tourist shops, and told us they were fake. We got flowers, and took them inside the temple for an offering. The bees loved the temple – so many flowers and sugar candy everywhere. The monkeys – or actually langours – black faces – also loved the temple, and lept about on the roof and trees, making quite a racket.
We rang the bell, and offered a flower at the altar – after seeing all four of the Brahma statue’s faces – the fourth was reflected by a mirror. The main part of the temple – the highest part of the building – was a bright orange color – very beautiful.
After our offering, Mr. Giri took us clockwise around the temple, and showed us some of the inscriptions on the tiles around the walls, and taught us some numbers written in Hindi – dates of deaths. 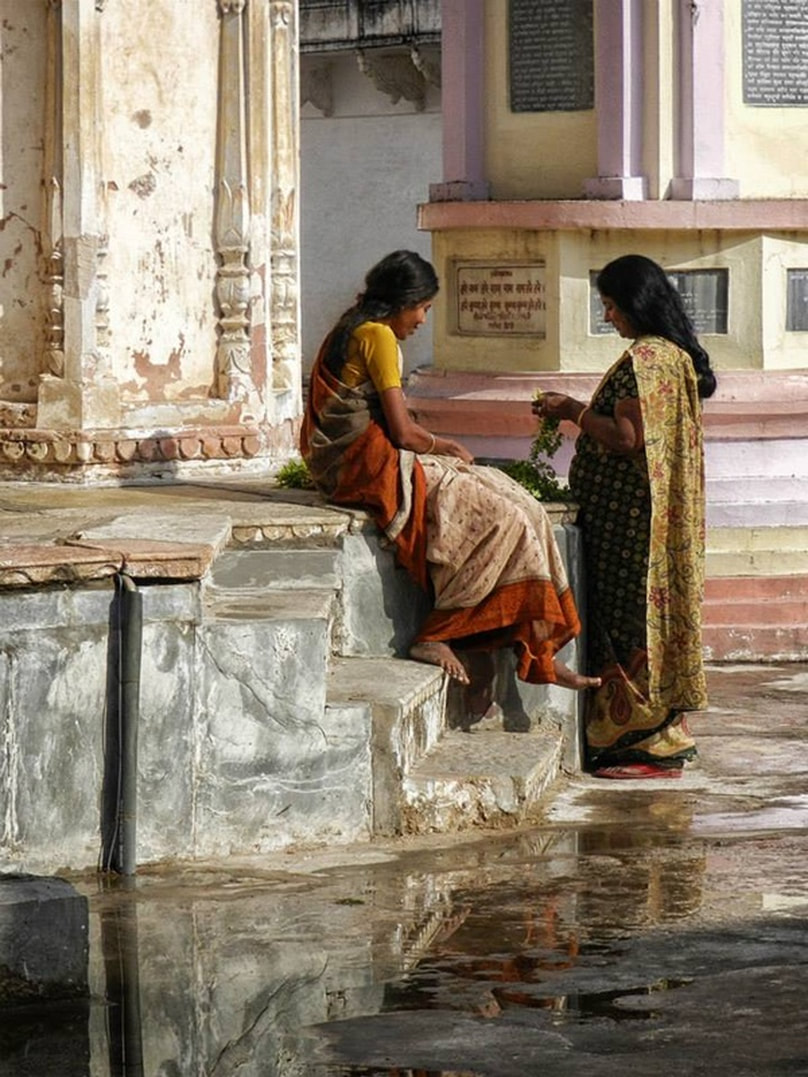 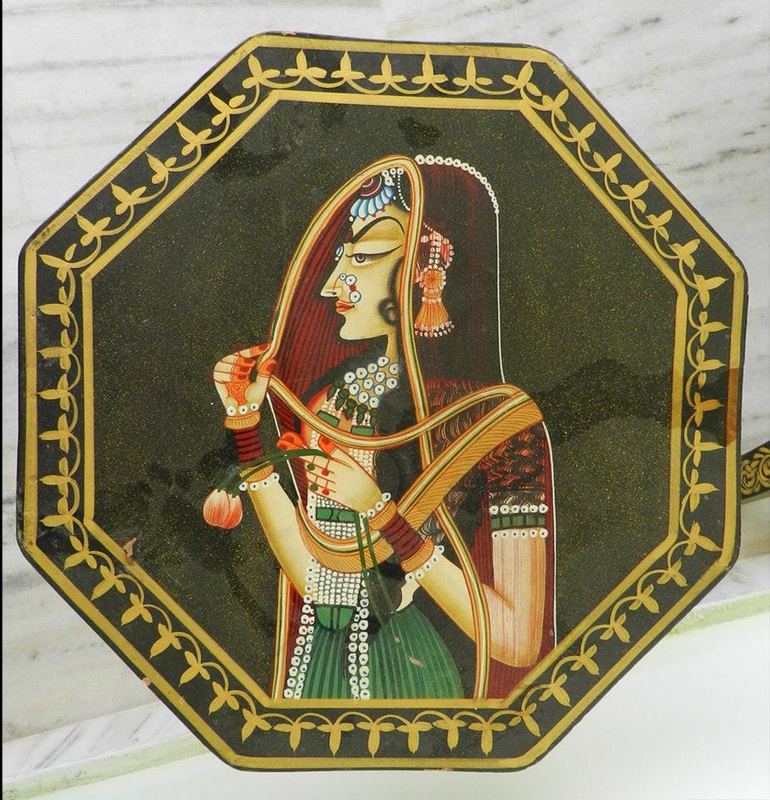 Mr. Giri spoke to us of our ever changing roles in life. He used his hand as an example. The middle finger is you, the pointer, your father, thumb: grandfather. The ring finger is your children, and pinky, your grandchildren. All through life all of these roles move from the little finger to the thumb. He also spoke of the “family tree”. His parents were bad, he said – they left him when he was 12, so he had to start a new tree. He married, and had two children, so now his tree is “four small, but it will grow”.
(When we left the temple, a family outside wanted to take photos with the foreigners (us) and one of the little kids flipped off the camera - I guess he thought it was how Americans greet each other.)

We then walked through more market streets to the ghats around the sacred lake. 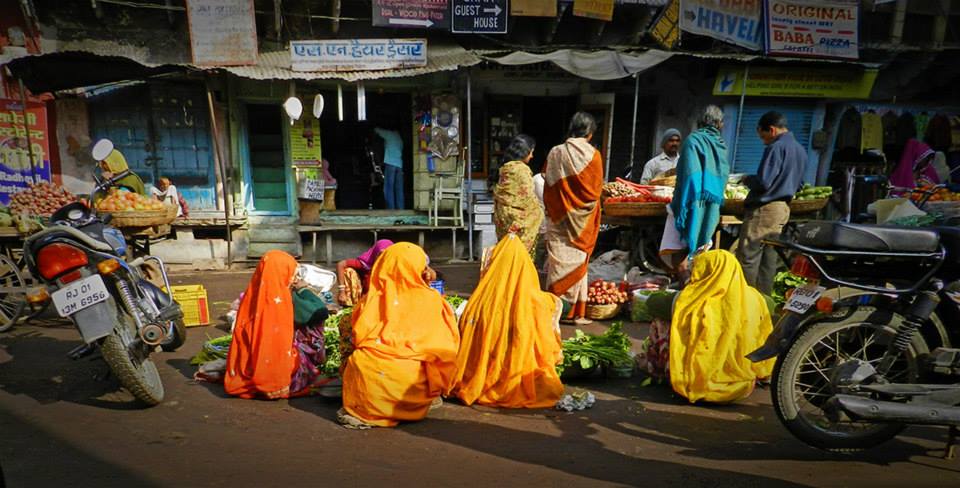 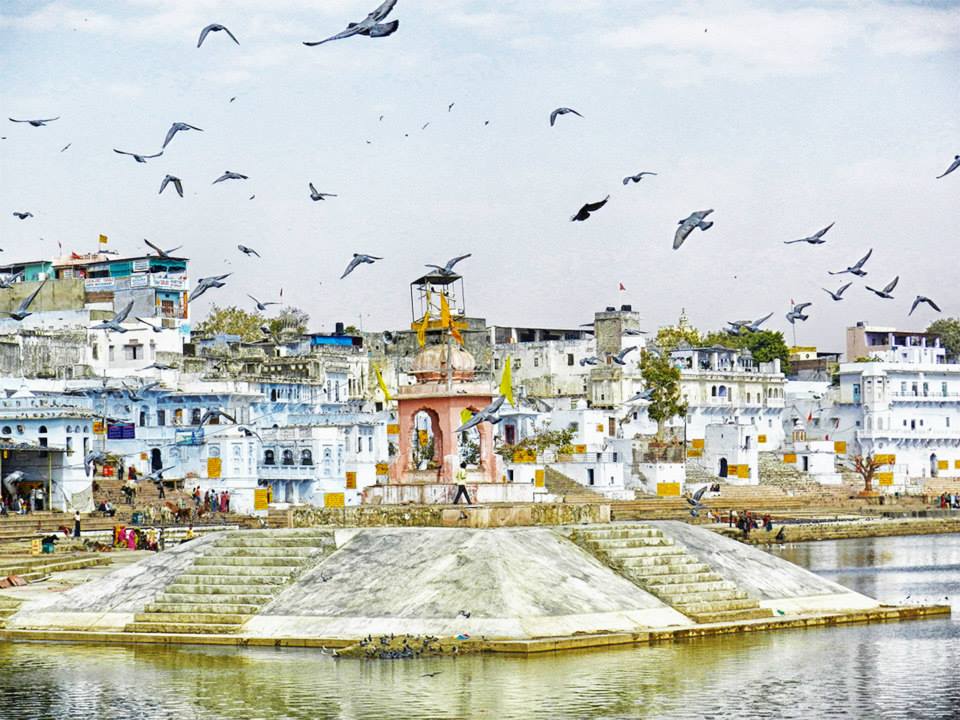 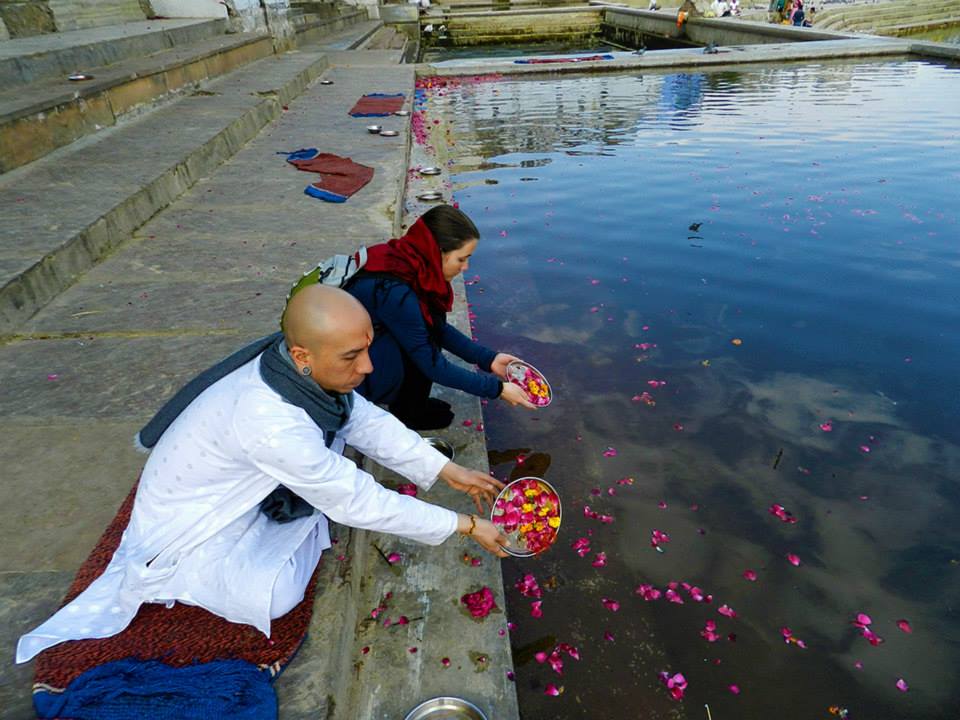 There we were helped by a Brahman priest to make a prayer, and were blessed, and gave prayers for our families. Then we were asked to give a ‘mandatory’ donation to the charity at the ghats… 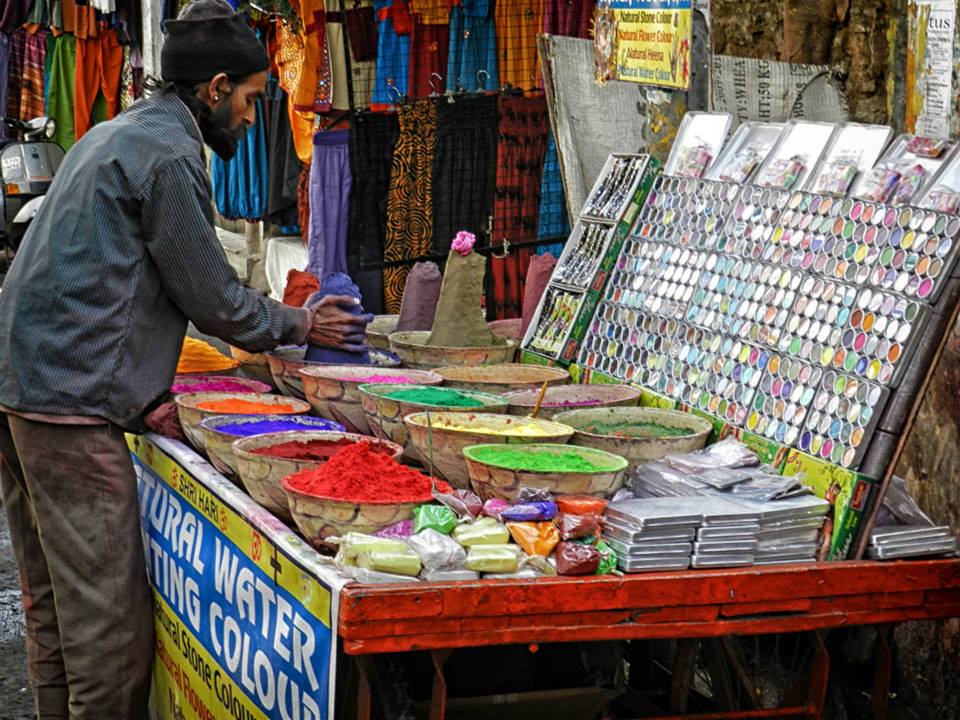 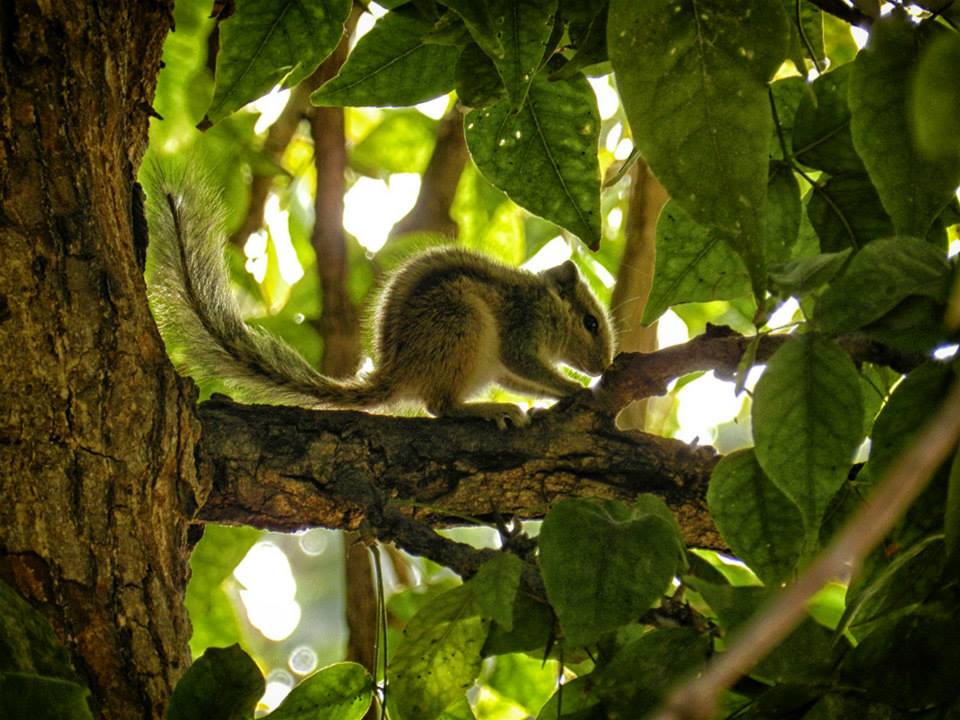 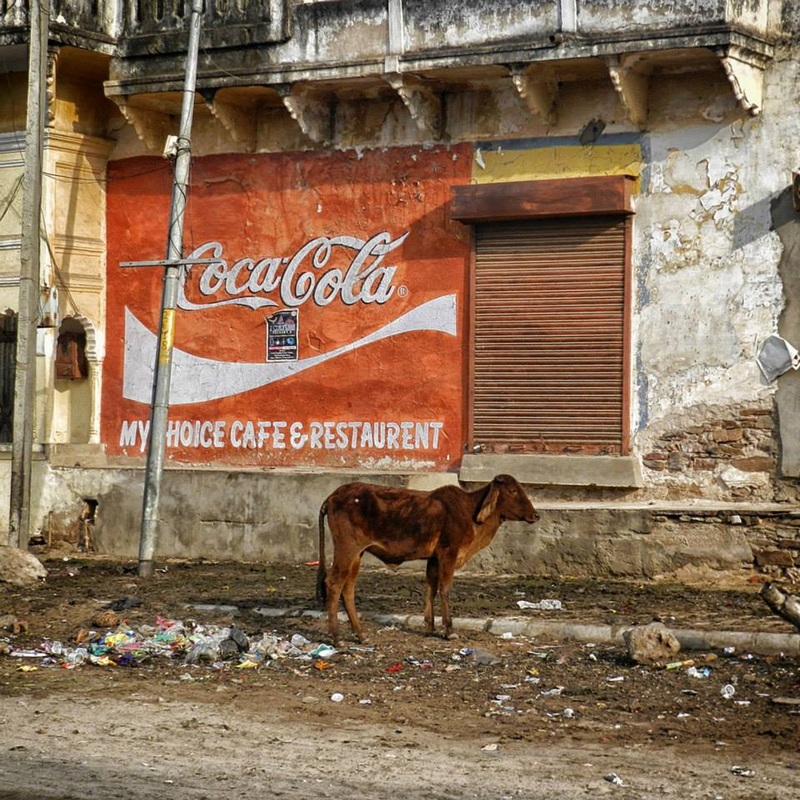 We were given a little printed card and some of the white “popcorn” candy to give to our family as a blessing. Then Hukam picked us up in the car, and we returned to the hotel to gather our things to go to Jaipur. 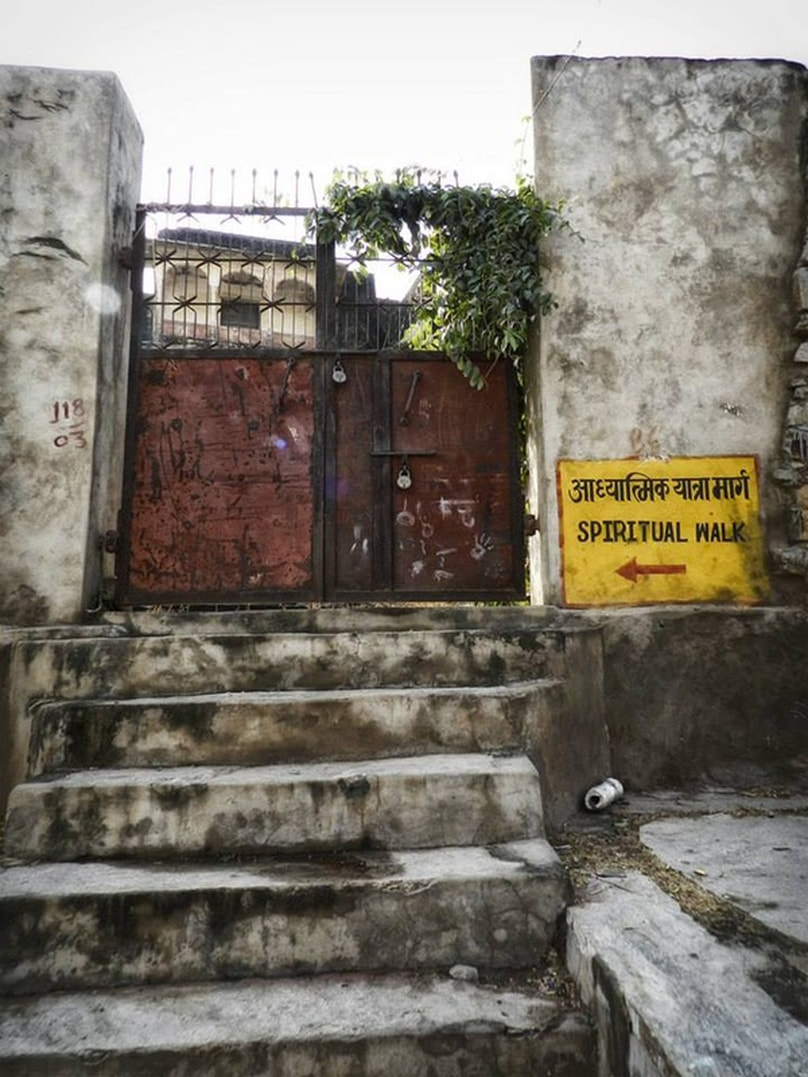 It wasn’t so bad of a drive to Jaipur – maybe 3 or 4 hours only. We arrived, and the traffic here is bad. It is the capital city of Rajistan – around 5 million people live here. They are building a metro, so there was also construction.

We had dinner on the company tonight – it was included with our tour. It was good – we had it at the restaurant at our hotel (which is nice and clean, and to Mike’s enjoyment – has a heater!). The décor in the rooms is pretty – I think I may paint some elephants like the ones in our room here at the house back home.

The dinner was enjoyable – we stayed for quite a while, talking, to the dismay of the workers. I came back to the room finally, to get some sleep before the elephant ride tomorrow – Mike is still with his ‘brothers’ – Hukam and Kumal. They are funny. They invited us to stay at their homes when we come back.
I got a new nick-name at dinner – Chandra bala – ‘moon-child’. It is very hippie, but fitting I think. The drivers thought it was hilarious, (especially since, according to them, Mike and I were on our ‘honeymoon’) and took to calling me ‘Chandra’ all the time, followed by fits of laughter. They still called me E-ma, too, though.